Please enjoy ARK Disrupt Issue 94. This blog series is based on ARK Brainstorming, a weekly discussion between our CEO, Director of Research, thematic analysts, ARK’s theme developers, thought leaders, and investors. It is designed to present you with the most recent innovation takeaways and to keep you engaged in an ongoing discussion on investing in disruptive innovation. To read the previous issue, click here.

1. SpaceX Is Flying To Mars In A New Rocket

At the 2017 International Astronautical Congress this week, Elon Musk laid out SpaceX’s plan to reach Mars with a new rocket, the BFR. It will carry 10 times the payload of the Falcon 9 and 5 times that of the Falcon Heavy, as shown below.

The BFR will replace all of SpaceX’s other vehicles, including the Falcon 9, Falcon Heavy, and Dragon Capsule. Musk reiterated his plan to send unmanned rockets and the first humans to Mars in 2022 and 2024, respectively. He concluded that the BFR also would transport people between most cities in fewer than 30 minutes and between all cities in fewer than 60 minutes, all for the price of an economy plane ticket.

ARK believes that Musk has set audacious goals, as usual, with these timelines and price targets for the BFR. Yet, no one believed that SpaceX could land a rocket in the first place, and after some early falters it has landed 16 rockets in a row. Leading all other rocket manufacturers in both cost and performance, SpaceX likely will leave the competition behind in its quest for Mars.

2. Toyota’s Autonomous Car Has Two Steering Wheels Too Many

ToyotaTM showed off its autonomous test car this week. Curiously, the car has two steering wheels which, according to the company, facilitates handoff from human to computer.

Toyota is taking a more cautious approach to autonomous driving than competitors. Its guardian system works in parallel with a human driver, who maintains full control of the vehicle and does not cede any responsibilities to the car. Perhaps the explanation is that Toyota started its autonomous development efforts three years later than some of its competition. It announced plans to form Toyota Research Institute, which heads up its autonomous efforts, in late 2015. Players like GoogleGOOG have been building autonomous cars since 2012.

Toyota’s autonomous test car uses LiDAR from a startup called Luminar. With longer range and greater accuracy, Luminar’s product is more expensive than traditional LiDAR systems. In fact, according to Luminar’s CEO, project teams would be willing to pay up to $400,000 for a completely reliable autonomous car. For comparison, Velodyne’s LiDAR is priced below $10,000, down from $75,000 in 2012. While more accurate sensors will create a safer, more reliable self-driving car, we wonder how much benefit incremental levels of accuracy will achieve.  Will the ability to identify the feet on a pigeon make a difference in preventing accidents?

If Toyota does produce a fully autonomous car, it could meet serious competition, even in Japan. ZMP, a Japanese technology firm, has partnered with a taxi company, Hinomaru Kotsu, in Tokyo to launch autonomous taxis in time for the 2020 Olympics. Toyota may be betting that its large research budget and the partnerships it is striking through the Toyota Research Institute will give it the edge, not only in Japan but around the world.

3. Amazon Echos Are Taking Over The Home

This week AmazonAMZN announced five new Echo products, cementing its lead in the home IoT (internet of things). Among these, the Echo Spot is particularly intriguing: combining the voice-driven user interface (UI) of Alexa with a circular touchscreen and camera, it is ideal for video conferencing and monitoring infants.

If Microsoft’sMSFT original mission was a PC in every home, Amazon’s vision appears to be an Echo in every room: while the PC was expensive and difficult to use, the Echo is cheap and frictionless. One of the Echo’s key attractions is that children, the elderly, and people with disabilities find it more accessible than conventional computers.

Amazon’s speed of execution is remarkable—in just over two years, it has launched eight Echo products in various form factors. Its experimentalist approach resembles SamsungSSNLF, but its business model couldn’t be more different. While device makers rely on hardware profits, Amazon sells its devices at breakeven to Amazon Prime customers, channeling goods and services through them. As a result, Amazon makes little profit on a device, but potentially thousands of dollars over the lifetime of the customer.

4. Artificial Intelligence Will Come To The Rescue After Natural Disasters

With the slew of devastating natural disasters worldwide in recent months, we are happy to learn that Silicon Valley is channeling its efforts towards this problem. One Concern, a startup in Palo Alto, has designed a suite of intelligent products to empower emergency response professionals before, during, and after a natural disaster. With artificial intelligence (AI), it focuses on the preparation for and responses to a potential disaster for at-risk areas.

According to a recent Time article, One Concern pulls geological and structural data from a variety of public and private sources and uses machine learning to predict the impact of an earthquake down to individual city blocks and buildings. According to its website, One Concern provides modules that address live disasters, simulated disasters for training and preparedness, and post-disaster resilience. When a disaster strikes, for example, it uses the algorithms and data it has developed and collected over time to understand the scope of the damage and direct rescue workers to areas in critical need of help.

Thus far, the company has developed and is distributing a module for earthquakes, with other modules for floods, wildfires, and hurricanes in the product development pipeline. San Francisco and Los Angeles are among its first clients.

The company aims to prioritize search and rescue in areas likely to be impacted the most by a natural disaster, and to provide incentives for building owners to raise their safety standards. Insurance companies will be able to use the simulations to understand the risks associated with different geographic areas and buildings, identifying risk more accurately and pricing insurance accordingly. Higher prices could become an important incentive for owners to remediate buildings that are in harm’s way.

While these tragedies can be devastating, companies like One Concern will use data collection and AI to save as many lives as possible.

This week, Eligo Biosciences sealed a $20 million Series A venture funding from Khosla Ventures and Seventure Partners after reporting its in vivo proof of concept data demonstrating the selective targeting of gut bacteria. Headquartered in Paris, the private company harnesses the power of CRISPR-Cas9 technology to target and kill bacteria in the human microbiome, while keeping ‘good’ bacteria intact. Notably, Eligo Biosciences was co-founded by Luciano Marraffini—the same scientist who was a part of Intellia Therapeutics’NTLA founding team.

Eligo’s platform has wide-ranging implications for the future of health care, as it can address drug-resistant bacteria such as MRSA and C. diff. As we discover more causal relationships among any of the 10 trillion bacteria humans carry with disease, Eligo’s addressable opportunity should grow significantly. Current antibiotic treatments kill not only bad bacteria but also a whole host of bacteria necessary for human health. Moreover, antibiotics lead to bacterial-resistance and superbugs. As shown below, by 2050 antibiotic microbial resistance (AMR) will cause mortality rates even greater than the number of lives lost to cancer. If successful, therefore, CRISPR-mediated bacterial targeting will change the course of human health.

While blazing a trail, Eligo Biosciences still is an early stage company. Seres TherapeuticsMCRB, is another company targeting the microbiome space with its proprietary “Ecobiotic” platform to treat disease while avoiding drug resistance. Its most advanced candidate is for recurrent C. diff in Phase 3 studies. Microbiome research has been a relatively recent area of research, but one that we believe will be transformative. 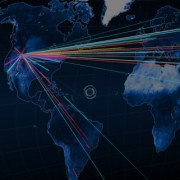 Tweets by @ARKinvest
GPUs vs. TPUs — Can NVIDIA Hold On To Its Lead?

The Future of Autos and Trucks Is Electric
Scroll to top