Please enjoy ARK Disrupt Issue 67. This blog series is based on ARK Brainstorming, a weekly discussion between our CEO, Director of Research, thematic analysts, ARK’s theme developers, thought leaders, and investors. It is designed to present you with the most recent innovation takeaways and to keep you engaged in an ongoing discussion on investing in disruptive innovation. To read the previous issue, click here.

1. Is A Bitcoin Civil War Brewing?

This week was a continuation of the trend set last week, with the markets of many blockchain assets showing strength while bitcoin stalled amidst the scaling debate. As of Friday, Bitcoin had lost over $3 billion in value since the March 10th rejection of the Winkelvoss ETF, while all the other blockchain assets had added more than $3 billion in aggregate market capitalization.1

On Friday an unsettling post was released by Peter Rizun, one of the technical leads of Bitcoin Unlimited, regarding his plan forward. Peter puts forth that in the case of a hard fork, Bitcoin Unlimited will attack the minority chain, which in this case would likely be Bitcoin Core. While Bitcoin Core has means to defend against such an attack, we believe the situation would be far from ideal. Others within the Bitcoin community, ourselves included, would prefer the different factions of this debate to work together. To that end, there are plans of a major meeting between Bitcoin miners, developers, and industry leaders taking place this May, hopefully to find some peaceful solution forward.

2. Dealerships Could Hurt US Auto Manufacturers’ Odds in the Autonomous EV Race

In previous newsletters, ARK has written that the dealership model is preventing traditional US auto manufacturers from enhancing their vehicles with over-the-air performance updates. By law in many states, autos in the US must be serviced through dealerships, potentially introducing a showstopper to the buying process: nighttime over-the-air updates are much more appealing to auto owners than are trips to dealerships.

After rave reviews last year, GM’sGM Chevrolet division is discounting the Bolt up to 10% in an attempt to move inventory. While some analysts are concluding that electric vehicles (EVs) are not ready for prime time, ARK believes that they are a more difficult sale for traditional auto dealers which have grown up advocating for cars based on the internal combustion engine, and which will lose significant service revenue because the number of parts in an EV is a fraction of those in traditional autos.

To illustrate how ill-equipped traditional dealers are to sell EVs, this week one advertised, “This Bolt EV is nicely equipped with a precision tuned electric drive engine — it will wring every last mile it can out of a drop of fuel.” EVs cannot be characterized by engines or fuel use.

BaiduBIDU lost two key AI executives this week. While Zhang Tong, the head of its big data lab, left for TencentTCEHY Andrew Ng, who left Google’sGOOG Brain Project two years ago to lead Baidu’s AI division, resigned. Tencent Finance reports that Ng resigned after losing AI resources to Baidu’s search service group, but he may have decided to partner with his wife, co-founder of Drive.ai, an autonomous car startup testing vehicles in San Francisco.2 Corroborating this hypothesis, he probably spearheaded the selection of his successor, Qi Lu, noted AI expert formerly with Microsoft, announced in January.

As for Ng’s potential new home, Drive.ai released a video earlier this year of its car driving in the rain at night. Rain, snow, and poor lighting conditions usually make it difficult for autonomous sensors to detect obstacles, but Drive.ai’s cars are less prone to failure because their proprietary deep learning algorithms can be trained on perception data with missing sensor inputs. Drive.ai’s autonomous system relies heavily on deep learning as opposed to a rules based system such as the formal logic technique used by nuTonomy in Singapore and Boston. Drive.ai definitely will be a company to watch in the autonomous driving space if Ng hops on board.

Baidu and other Chinese firms have been luring AI talent from the US with salary packages higher than those offered by their US counterparts. Guangzhou Automobile Group Chaiman Zeng Qinghong stated in Tencent Finance that the rising costs of bringing US talent to China are becoming increasingly a challenge for his firm.3

Ng helped Baidu become an AI powerhouse, a lead that will not disappear overnight. On its fourth quarter earnings call, Baidu prioritized three opportunities in AI: financial services, cloud, and autonomous driving. ARK estimates that China will be a market larger than the US for autonomous driving, with a local player likely to be favored by the government. In that case, Baidu could be in an enviable position.

4. CancerLocator Will Be Critical to Therapeutic Success in the Oncology Space

Noninvasive liquid biopsies, which detect cancer through cell-free DNA in blood, hold great promise. Striving to “develop a blood test to detect cancer early before symptoms appear,” companies like GRAIL are evolving rapidly in response to this diagnostic potential. The challenge currently is “that the cancer type can remain unknown even when there is a strong signal of tumor-derived DNA fragments in the blood.” Not knowing the tissue of origin, oncologists could be forced into costly follow-up investigations, and patients could wind up on an emotional rollercoaster.

Providing a glimmer of hope, Jasmine Zhou and her team from UCLA reported in Genome Biology an approach to determining both the presence of tumor DNA and its tissue of origin. While nascent in its findings, the study leveraged off of Cancer Genome Atlas DNA methylation data to derive a database of methylation markers for cancer types, in particular breast, colon, kidney, liver and lung. They then used the methylation profile to predict the presence of tumor DNA and its source. Continued progress in liquid biopsies and early cancer diagnosis continue to invigorate ARK’s research, given the profound impact of early diagnosis on survival.

Tweets by @ARKinvest
Facing Down the Bull Market: Why ARK Believes the “Fearless Girl”... 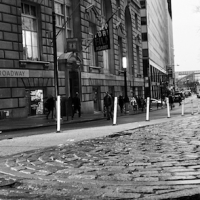