#325: New Partnerships At Netflix And Disney Corroborate The Shift From Linear to Digital Ad Growth, & More

1. New Partnerships At Netflix And Disney Corroborate The Shift From Linear to Digital Ad Growth

Last week, Netflix announced that Microsoft will be its “global advertising technology and sales partner” as it offers a new, lower priced, ad-supported subscription plan. Having acquired the Xandr advertising platform from AT&T in 2021, we believe Microsoft will have to accelerate investment to accommodate all of Netflix’s ad inventory over time. Among the many potential partners Netflix could have chosen, Microsoft is the most independent but untested player in the highly competitive streaming space. As noted by Needham Senior Analyst Laura Martin, Microsoft must develop significant capabilities before it can represent Netflix properly.

Meanwhile, Netflix competitor Disney announced recently that it chose The Trade Desk as its advertising partner. The Trade Desk will be its primary demand-side platform (DSP) connecting advertisers and agencies with Disney’s ad inventory across both streaming and linear properties: Disney+, Hulu, ABC, and ESPN. The relationship is an important step in Disney’s efforts to sell more of its ad inventory programmatically, targeting 50% by 2026. With The Trade Desk and its open-source identifier, Unified ID 2.0, Disney should be able to leverage valuable first-party data and match audiences with advertisers in a secure, anonymized way.

These partnerships are likely to accelerate the adoption of programmatic ads. Both publishers and advertisers should be able to quantify how much streaming increases return on ad spend (ROAS) relative to linear TV.

As delineated in our new open-source Roku valuation model and research article, global digital ad spend is likely to increase 14% at an annual rate during the next five years, from approximately $439 billion in 2021 to $850 billion in 2026, while global linear TV ad spend contracts 4% at an annual rate from $169 billion to $138 billion. With their recent moves, Netflix and Disney have added to our conviction in this forecast.

2. The Partnership Between Twist and DNAnexus Could Accelerate The Development And Commercialization Of Liquid Biopsies For Cancer

The first products are Twist’s DNA methylation kit and unique molecular identifier (UMI) kit, both used to develop and commercialize liquid biopsies for diseases like cancer. Because budget constraints often compel bioinformatics scientists to split their time between analyzing genomic data and scaling a lab’s software infrastructure, the Twist-DNAnexus partnership could eliminate a bottleneck that has been slowing the overall rate of innovation. Stitching together Twist’s NGS solutions and DNAnexus’ software suite, bioinformaticians should be able to focus their efforts on product creation and analysis instead of database management.

Both Twist and DNAnexus should benefit as companies build upon their respective platforms to accelerate the time-to-market for new cancer diagnostics. Indeed, Twist and DNAnexus are likely to remain indifferent to the share shifts between and among sequencing and diagnostic providers. Ultimately, we believe the collaboration between Twist and DNAnexus could pose a powerful alternative to Illumina’s (ILMN) BaseSpace for non-Illumina sequencing users.

3. Ethereum’s Hashrate Is Dropping As The Transition To Proof-of-Stake Consensus Nears The Finish Line

Ethereum’s long-awaited transition from Proof-of-Work (PoW) to Proof-of-Stake (PoS) consensus is almost complete, which will mark the most important milestone in the smart contract blockchain’s roadmap since its inception in 2015.

During the past few months, core developers and node operators have started migrating Ethereum’s four major test networks to the PoS codebase. On July 6, the Sepolia testnet migrated successfully, leaving only the Goerli testnet to transition before core developers can complete the final merge on the main network, possibly in September.

The merge will end Proof-of-Work mining on the Ethereum network, which will obviate the need for consumer graphics cards (GPUs) used for mining today. Anticipating the merge, and accelerated by the broad-based drawdown in crypto prices since early May, Ethereum’s hashrate decline signals that miners are transitioning capacity away from the network. 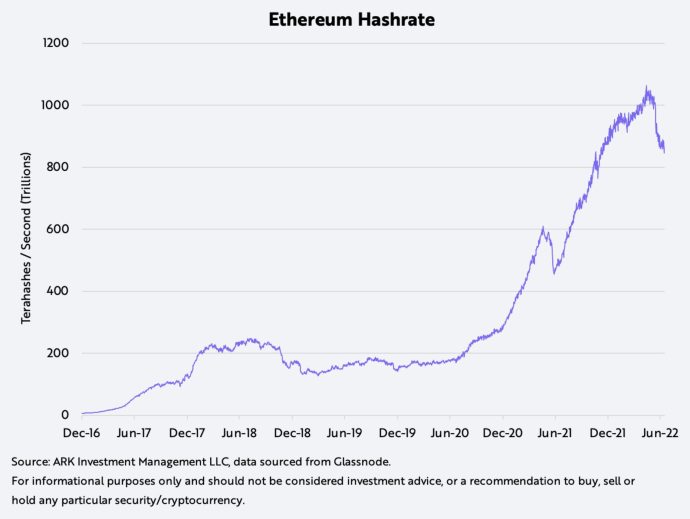 We invite you to listen to ARK’s most recent podcast in which Mynaric CEO Bulent Altan unpacks optical communication for satellites that could circumvent existing regulatory constraints. Please listen to the full episode here and find key topics from the episode below: