ARK continuously seeks to understand the convergence between and among the technologies involved in our five innovation platforms. To date, we have been skeptical of applications at the nexus of two of the platforms––blockchain technology and next-generation DNA sequencing (NGS). Leveraging blockchain advances in biomedical settings has seemed like a solution in search of a problem.

Recently, a paper from researchers at Yale University described two inventions that caught our attention: (1) the first fully on-chain storage and analysis solution for raw genomic data, and (2) a lightweight encoding scheme that reduces the computational load associated with accessing and manipulating genomic data. As the authors note, biomedical blockchains typically have stored raw genomic data offline, making it difficult if not impossible to access. Yale’s SAMchain, however, allows users to upload and control access to DNA sequence reads. Interestingly, Invitae’s (NVTA) digital health platform offers similar selective access capabilities but does not leverage blockchain technology to give patients a centralized, permissioned hub for access to their genomic and clinical information. As a result, blockchain-based DNA storage systems seem to be competing more with private databases than public blockchains.

To contend with large file sizes, the Yale researchers also introduced a data compression tool that stores variations between a person’s genome and the human reference genome. Though highly efficient, the reliance on a reference genome introduces potential biases that could become incompatible with future genomic data structures. In our view, linear reference genomes are inferior to graph-based representations in capturing ancestral variations. Interestingly, blockchain networks and graph data structures are compatible enough to make a future graph-based version of SAMchain perhaps more useful and accurate.

2. Volkswagen’s Ongoing Software Struggles Might Not Be Solved With More Tech Talent

This week, Reuters reported that Volkswagen (VW) is streamlining its software unit, Cariad, in an attempt to accelerate software development. After struggling for years, VW and other traditional automakers seem to be facing “The Mythical Man Month” problem: adding manpower to a software project that is behind schedule exacerbates the problem. VW’s software chief says that the problem is “20% [a] technical challenge and 80% [a] fundamental [challenge requiring] mental change, cultural change.”

While automakers probably could benefit from fresh software talent, top management needs to put in place cultural and architectural changes to support it. In our view, vertically integrated players like Tesla are best positioned to transition mobility from gas-powered to electric and from human-driven to autonomous.

3. Klarna’s Valuation Down Round Could Be Par For The Coming Course

According to a recent WSJ report, in its next funding round the valuation of Swedish Buy Now Pay Later (BNPL) startup Klarna could drop 85% to $6.5 billion, well below rumors of around $30 billion and $15 billion in May 2022 and June 2022, respectively, as well as the SoftBank-led funding round that valued the company at $45 billion in June 2021. At a $6.5 billion valuation, Klarna and public competitor Affirm would be equivalent on a price-to-sales basis, as shown below. At a $30 billion valuation, its price-to-sales ratio would have matched that of Affirm nearly a year ago in June 2021, before public and private valuations collapsed. 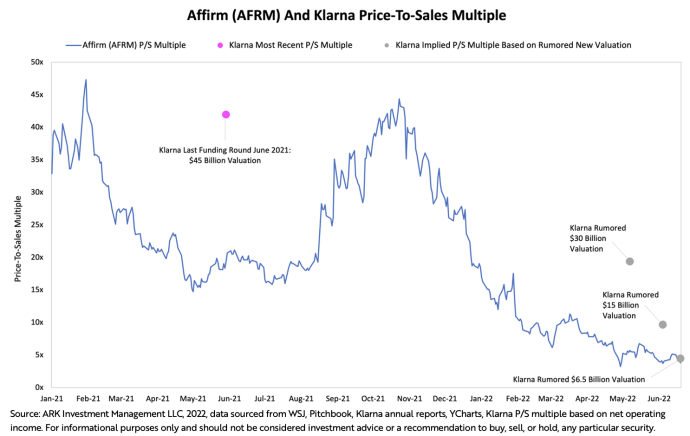 Such a steep valuation cut would not surprise us. According to our research, standalone BNPL providers like Klarna and Affirm are facing increasingly stiff competition from digital wallets like Cash App, Shop Pay, and Apple’s Pay Later that will expose their limited value proposition. We believe digital wallets will integrate BNPL as a “feature,” not a product, and will evolve into full service “bank branches in pockets” serving user bases much larger than any US money center bank.