1. ARK’s ‘In The Know’ Presents A Conversation With Nancy Lazar, Chief Global Economist At Piper Sandler

Given the economic turmoil that continues to roil the equity and bond markets, we wanted to provide an intra-month episode of ‘In The Know’ for two reasons: to highlight more signals suggesting that the Fed will not raise interest rates as much as the markets are fearing and to introduce Nancy Lazar, Chief Global Economist at Piper Sandler, who we believe is one of the most data-driven and objective economists of our time. During the last six months, while most economists on Wall Street seemed to be leap-frogging one another with higher interest forecasts and narratives that inflation would remain out of control, Nancy was looking to the future with econometric models suggesting quite the opposite.

With several provocative charts, Nancy shared some of her thoughts and forecasts, putting into perspective some of the reasons that Walmart, Target, and Cisco announced extremely disappointing results this week. We trust that the Fed is paying close attention to what these companies are telegraphing about the US economy. To see the charts and hear our thoughts, please use this link.

During its first investor day since 2017, Block––formerly Square––declared that it is not just a payments company but instead an “ecosystem of ecosystems” seeking to drive economic empowerment. Block Head, Jack Dorsey, seemed to imply that Block’s ultimate success will be a function of Bitcoin’s success, saying, “The internet requires a currency native to itself and, in looking at the entire ecosystem of technologies to fill this role, it’s clear that bitcoin is currently the only candidate.”

Consistent with that position, each of Block’s Bitcoin-focused initiatives is now open-source by default and will be accessible to anyone with access to broadband through a business model that Block will build out long term. Another example of this framework is Cash App’s recent integration of the Lightning Network and support of Lightning payments with the Lightning Development Kit. Spiral, Block’s independent subsidiary focused solely on developing and funding open-source Bitcoin projects, developed the Lightning Software Development Kit.

With a “Bitcoin-first” approach like that of Cash App, Block also hopes to fill gaps in the market with several other initiatives: a hardware wallet that will enable convenient and collaborative self-custody; a Bitcoin ASIC that continues to decentralize the supply chain away from China; a service that makes Bitcoin mining operations more accessible; and an identity/trust platform that facilitates fiat-to-bitcoin on- and off-ramps.

Bitcoin is the first global, open, rules-based, internet-native standard for money. We believe that, if successful, not only will Block’s initiatives provide compelling business opportunities for the company, but they also will strengthen the Bitcoin network significantly.

Speaking at a media summit this week, Disney’s CFO, Christine McCarthy, said the company expects ad-supported accounts to make up the bulk of Disney+ subscribers when it introduces advertising later this year. Disney already has benefited from ad-supported streaming through its ownership of Hulu: ~70% of Hulu’s 45 million active accounts are ad-supported.

Most streaming services today offer lower cost ad-supported tiers. Even long-time holdout Netflix expects to do so by the end of the year. Why?

According to Roku’s CEO, Anthony Wood, while TV audiences spend 46% of their time on streaming, advertisers spend only 18% of their TV budgets on streaming services––a clear mismatch between engagement and ad spend. Now, companies and advertisers are playing catch-up. As a result, the TV ad spending landscape is likely to transform significantly. According to our research, during the next five years, the number of US households with linear TV will drop 7% at an annual rate, from 72 million to 49 million, as shown below. Similarly, we expect US ad spending on linear TV to decline 6% at an annual rate from $66 billion last year to $49 billion, shifting $17 billion to streaming platforms like Roku, Amazon Prime, HBO Max, Hulu, and Disney+, and Netflix. 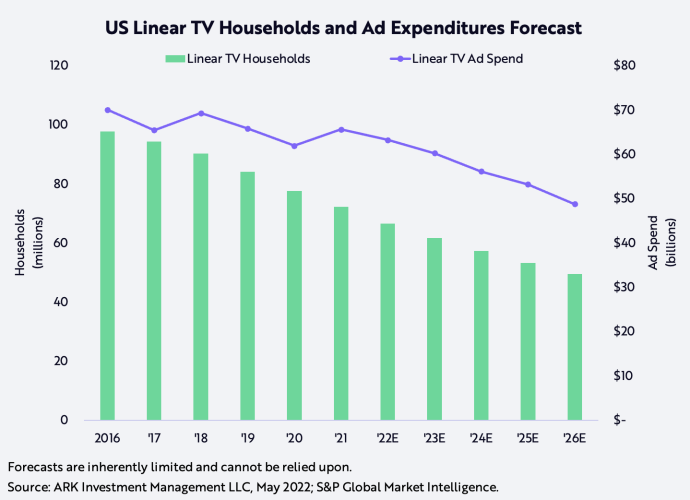 This week, Waymo’s Co-CEO Dmitri Dolgov announced a fully driverless ride-hail service in downtown Phoenix that its employees will pilot. After it launched its driverless service initially in October 2020, we wondered why Waymo did not expand from the Phoenix suburbs to more complex urban environments. Since then, it has done so.

Now its most important milestone will be when Waymo extends driverless service from limited “Trusted Testers” in San Francisco, a city five times as dense as Phoenix, to the public.

Waymo and Cruise have proven that autonomous ride-hail is possible today. Now, we need to understand how quickly they will scale.