According to its Impact report for 2021, Tesla can recover raw materials from batteries with ~92% efficiency: for every 1,000 kWh worth of end-of-life batteries, Tesla recovers 921 kWh worth of raw metals to produce new batteries. The importance of recycling already is clear when cells don’t meet quality assurance during the manufacturing process. Tesla believes that “the costs associated with large-scale battery material recovery and recycling will be far lower than purchasing additional raw materials for cell manufacturing,” contributing significantly to continued battery cost declines and amplifying the importance of recycling as more electric vehicles reach end-of-life.

Last weekend, Yuga Labs launched its latest series of NFTs (Non-Fungible Tokens), called Otherside, marking the next phase in a metaverse-like virtual game and world centered around its famed “Bored Ape” intellectual property (IP). The launch included the sale of the first 100,000 virtual plots that will bestow special ownership rights in the virtual world. Selling out in fewer than three hours, the largest mint and primary sales in NFT history generated an estimated $317 million.

The launch did not go off without a hitch. Racing to increase their odds of success in buying plots on the limited supply of land, investors and bots bid up transaction fees on the Ethereum blockchain. Some users paid as much as $10,000 in fees for the right to buy the land, nearly twice the $5,800 mint price for the underlying virtual plot.

In the ensuing blame-game, Yuga Labs and others criticized the Ethereum blockchain for the high user fees. As Ethereum founder Vitalik Buterin pointed out, however, those fees were a function of demand relative to limited supply, not the Ethereum chain or smart contracts: buyers bid up transaction fees based on their desire to own the virtual plots and their willingness to pay. Had it conducted a Dutch auction, the original plan abandoned just days before the mint, Yuga Labs would not have faced this controversy and probably would have garnered most of the proceeds that went towards transaction fees and/or lowered the total purchase price of the land for its users.

Others have criticized Yuga Labs for botching the launch and blaming the underlying Ethereum blockchain. Some critics are proposing that Yuga create its own blockchain, an argument that suggests that hype could be overwhelming the underlying value of NFT projects. New venture investors could be encouraging projects to generate returns at an accelerated rate by minting new NFT derivatives, possibly at the expense of building the value of their communities more deliberately and sustainably.

By altering DNA, gene editing holds the promise of curing disease. ARK believes that understanding gene editing’s risks and benefits is becoming increasingly important for the future of human, animal, and plant health.

To understand how they impact DNA, we analyzed the outcomes of three major gene-editing technologies––nucleases, base editors, and prime editors:

CRISPResso2 is a state-of-the-art DNA sequence analysis tool that helps determine the editing outcomes and off-target edits. The analysis generates allele plots––a visualization of gene dynamics focused on changes during the gene-editing process, as shown below. 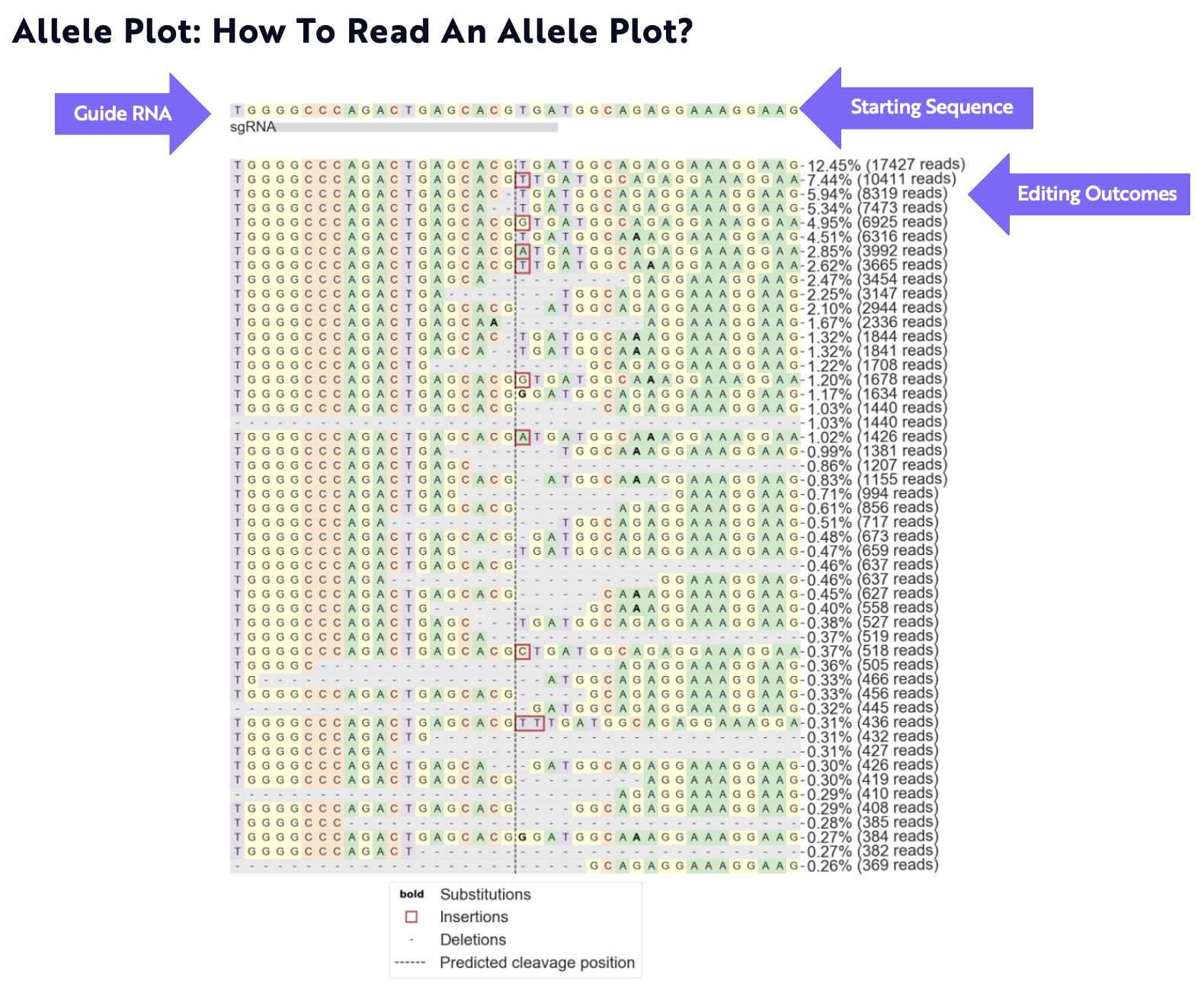 In the first example, shown below, scientists edited the HEK3 locus in HeLa cells, causing gene disruption and significant indels (insertions/deletions). While indels are necessary for gene disruption, we cannot ascertain unintended consequences in advance. 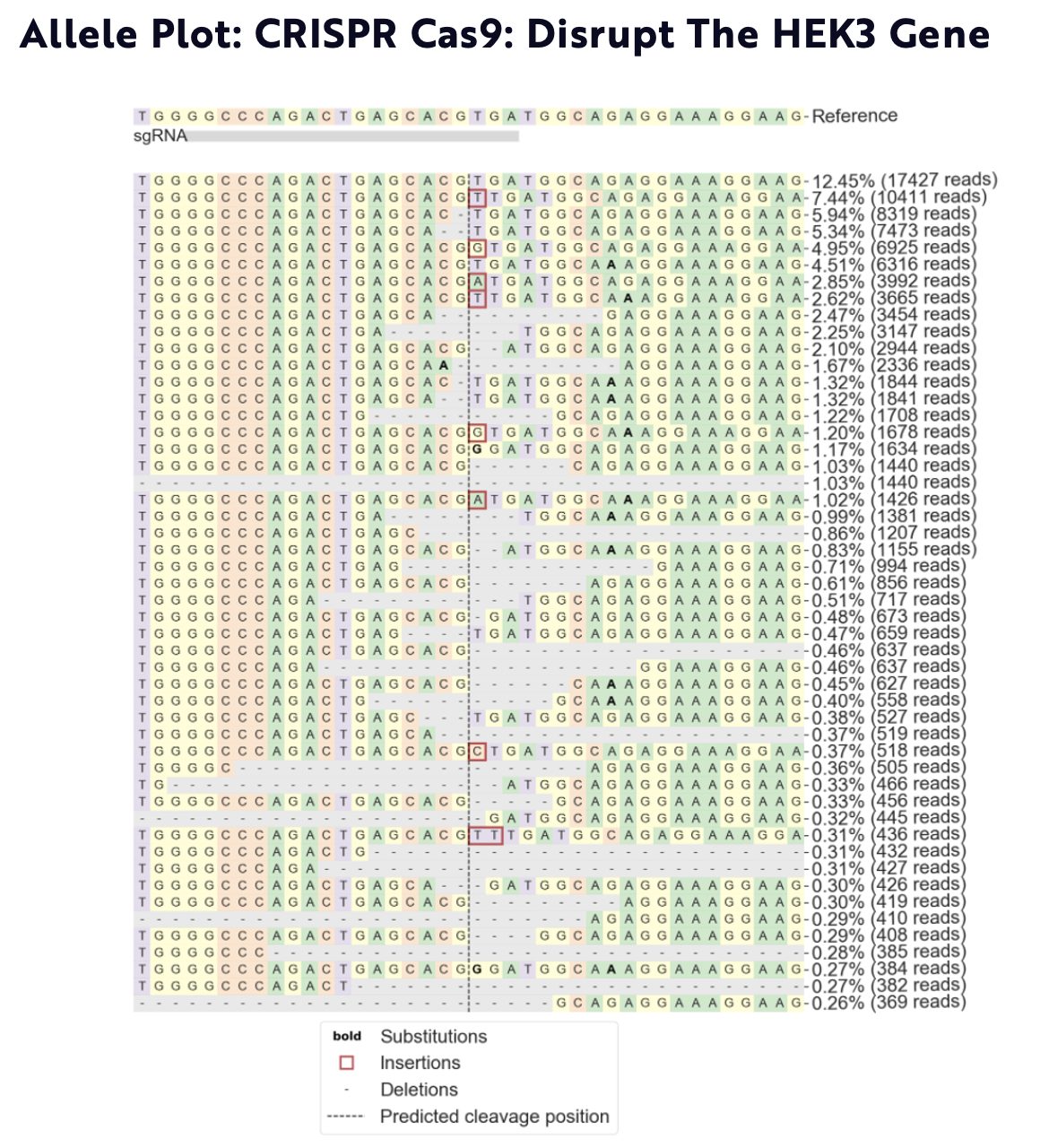 In the second example, scientists used a base editor to create an A to G edit in the PCSK9 gene that affects lower-density lipoproteins (LDL)––bad cholesterol. The allele plot below showed no visible off-target edits or indel creation but did reveal bystander edits, or other unintended A to G edits.

In the prime editing example, scientists used PE5 max to create a G to T edit at the PRNP locus in HeLa cells––something that only prime editing can do. Based on the allele plot shown below, this edit caused no visible indels at or around the cut site, though other substitutions occurred 0.93% of the time.

These gene-editing technologies are exciting, their success is likely a function of the original discovery of the CRISPR Cas protein. CRISPR-Cas9 has been the most successful gene-editing technology in humans thus far. The alternatives are in pre-clinical testing or have entered the clinic recently.

Understanding the risks and benefits associated with each of the available gene-editing technologies has become increasingly important. They are features of an ever-expanding DNA-alteration toolbox that will play important roles in different indications. As gene-editing innovations proliferate, cross-licensing between and among the technologies is likely.