#313: Having Scaled Its Base Business With Remarkable Efficiency, Tesla Is Committing To Manufacturing Robotaxis At Scale, & More

1. Having Scaled Its Base Business With Remarkable Efficiency, Tesla Is Committing To Manufacturing Robotaxis At Scale

Tesla is scaling production with remarkable operational efficiency. During the first quarter, although it manufactured 300X more vehicles, Tesla’s operating expenses totaled only ~$1.9 billion, less than Rivian’s ~$2.1 billion during the fourth quarter.

Last week, Elon Musk reiterated Tesla’s commitment to manufacturing a purpose-built robotaxi ––with no steering wheels and pedals––and moving it into volume production in 2024. At the midpoint of ARK’s recently published valuation model, Tesla would launch a robotaxi service in 2024, two years later than its initial goal. According to our forecast, more than 60% of Tesla’s enterprise value in 2026 could be attributable to its robotaxi platform.

2. Will Digital Advertising Give Netflix Its Next Leg of Growth?

After losing 200,000 subscribers during the first quarter, Netflix is seeking ways to accelerate its revenue and user growth. In its shareholder letter, the company detailed “four main inter-related factors” that have contributed to its current woes:

Password sharing is the most interesting factor on the list. Along with its 222 million paying households, another 100 million access Netflix, primarily through parent accounts, at no cost. To address that problem, the company could increase prices on accounts used by more than one household and/or introduce an advertising alternative to defray costs for friends and family.

On its earnings call last week, Reed Hastings––Co-Founder, Chairman, Co-CEO, and longtime holdout against advertising–– announced Netflix’s plans to offer a lower priced, ad-supported subscription service. In our opinion, both investors and users should welcome Netflix’s 180º turn on advertising, especially because most major streaming services have moved successfully to a hybrid model.

3. Liquid Staking Is On The Rise

As Ethereum transitions to Proof-of-Stake (POS),[1] deposits into the POS contract yielding 4-5% in ETH have accelerated dramatically. Ether holders wishing to participate can either run their own validator node or stake through a service provider such as Coinbase, Kraken, or Lido. Because running a node requires technical expertise, most users stake through a central servicer provider.

Lido’s staking-as-a-service product is semi-decentralized and has grown significantly because of “liquid staking”. Liquid staking tokenizes a staked asset and enables decentralized finance (DeFi) activities like lending and trading. We believe that because of its unique functionality, Lido has scaled rapidly in the last year and now is the largest staking provider, controlling nearly 30% of total ether at stake, as shown below. 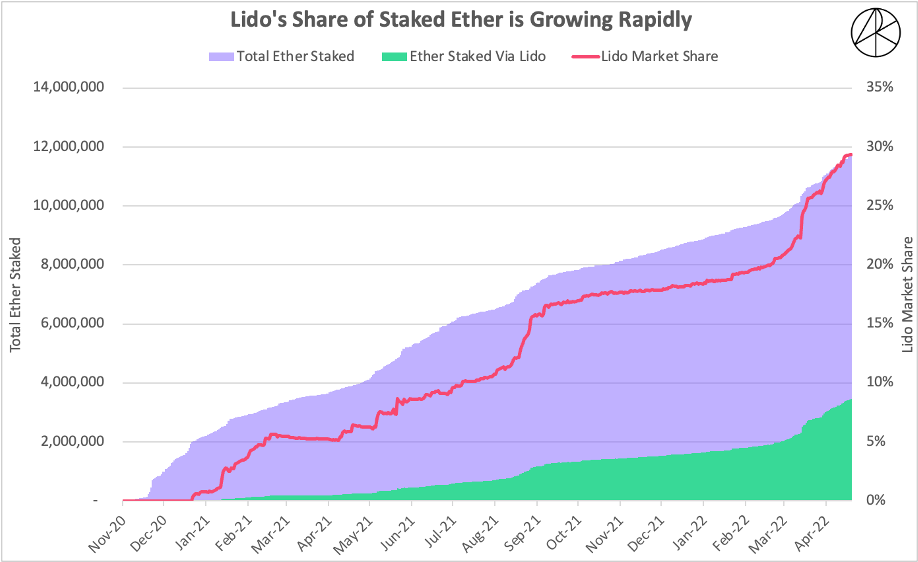 For informational purposes only and should not be considered investment advice, or a recommendation to buy, sell or hold any particular security or cryptocurrency.
Source: ARK Investment Management LLC based on data sourced from Glassnode and Coingecko

With the power of DeFi at their fingertips, creative users are seeking ways to maximize their exposure to staked ether. Some have levered their exposure to Lido’s liquid staked ether token (stETH) in lending markets like Aave, tripling the native-staking Annualized Percentage Yield (APY). As a result of this yield-seeking behavior and other strategies, Aave deposits already account for roughly 25% of total stETH supply. Lido’s success suggests that liquid staking could create a winner-takes-most market as new entrants gravitate to the most liquid “liquid staking” service.

The Global Financial Crisis in 2008-09 taught us profound lessons about what can go wrong when leverage builds in multiple layers of wrapped financial products like collateralized-debt obligations and CDOs squared. Likewise, in liquid staking, we believe that if stETH were to lose its price peg to ETH––should users decide en masse, for whatever reason, to un-stake ETH, for example––the price of stETH could plummet.[2] Given the widespread adoption of ETH and stETH in DeFi and Web3, leverage seems to be building rapidly and could pose a systemic risk to crypto. Lido is well aware of the importance of its role in the staking ecosystem and has detailed a roadmap to decentralize its operations further in an effort to increase participation and resiliency. To mitigate risks, all market participants––developers, operators, and investors––will need to intensify efforts to manage, monitor, and control risk, for example, by placing limits on borrowing power.

Thankfully, unlike the traditional financial system, public blockchains are transparent, giving investors the ability to monitor on-chain analytics, assess the risks, and mitigate their exposure to them.

[1] “Proof-of-Stake” and “Proof-of-Work” are different ways in which transactions can be confirmed and committed to the blockchain. See ARK’s March 21, 2022 Newsletter for details about Ethereum’s transition to the Proof-of-Stake approach.
[2] Similar, perhaps, to the recent Ichi debacle.

Tags: IPO, Market Insights, MSCI
See More
See all articles
You are leaving ark-invest.com
By clicking below you acknowledge that you are navigating away from ark-invest.com and will be connected to ark-funds.com ARK Investment Management LLC manages both web domains. Please take note of ARK’s privacy policy, terms of use, and disclosures that may vary between sites.
PROCEED