1. Bitcoin 2022 In Miami Highlighted A Bright Future For Bitcoin

Bitcoin’s regulatory outlook and scaling capacity were top of mind. ARK Invest’s CEO and CIO, Cathie Wood, enjoyed a fireside chat with Michael Saylor, CEO of Microstrategy, the largest publicly traded holder of BTC. They discussed regulatory shifts, the accelerated adoption of the Lightning Network, and institutional investor interest in and appetite for Bitcoin.

Block announced three new Bitcoin services for Cash App: automatic conversion of a percentage of direct deposit paychecks into bitcoin; automatic investment of the change from debit transactions into bitcoin, stocks, or ETFs; and a unified QR code enabling users to send and receive bitcoin on both the Lightning Network and the base layer.

This week, Elon Musk disclosed that during the last three months he has accumulated 9.2% of TWTR, becoming Twitter’s largest shareholder.

Recently, the visionary Twitter user polled his followers with the following questions:

Is Musk going to shake up Twitter’s approach to censorship? If so, how? Will he steer Twitter to an open-source algorithm? Will he advocate for Twitter’s transition from a platform to a protocol? Will he convince the company to change its Terms of Service and unsuspend accounts?

We wonder how next steps will impact Twitter’s advertising revenue. Advertisers do not like the uncertainty associated with ad placements, which is the primary reason that platforms say they censor hate speech, harassment, and other offensive content. Given the relationship between “sanitized” content and advertising dollars, we wonder how Musk’s vision for Twitter will impact its current business model?

OpenAI recently upgraded its image generation system with DALL·E 2 which, like its predecessor DALL·E 1, generates images from text but with four times greater resolution. Key improvements come from a redesigned two step system that combines CLIP, another OpenAI model, with a diffusion model. The text prompt, “an astronaut riding a horse in photorealistic style,” for example, generated the image below.[1] 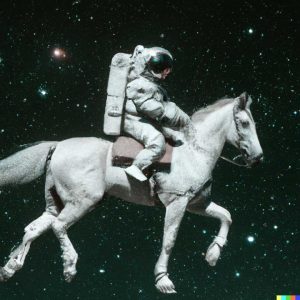 DALL·E 2 also can edit images, adding and removing elements while adjusting shadows, reflections, and textures. In the example below, the model added a corgi in the background.

The model learns the relationship between text and images to generate new images. We believe DALL·E 2’s “creative AI” could have profound implications for and applications in advertising and virtual worlds.

[1] The model is not yet available to the public. OpenAI employees generated these images as examples.

4. Strike’s New Merchant Integrations Could Accelerate The Adoption Of Bitcoin

During last week’s Bitcoin 2022 conference, CEO Jack Mallers announced that Strike will enable merchants to accept bitcoin routed through the Lightning Network. Strike is a leading Lightning-enabled digital wallet whose users can buy, sell, and transact in bitcoin seamlessly. Last week’s announcement will leverage the Lightning Network so that merchants can process bitcoin payments instantly and cost effectively. Shopify merchants, for example, will be able to accept bitcoin payments in their digital checkouts.

Strike also is working with large-scale point-of-sale hardware and software providers like NCR and Blackhawk Network, enabling merchants to accept bitcoin with QR codes through their in-person POS terminals. Underscoring the global reach of the partnerships, Mallers noted that merchants including McDonald’s, Walmart, and Macy’s will be able to accept bitcoin as early as this year.

Consumers will be able to use any Lightning-enabled wallets, including those with self-custody, to transact with Strike-enabled merchants in an open ecosystem that will enhance user choices and privacy. Strike plans to enable the conversion of bitcoin payments into USD instantly, potentially disrupting traditional, centralized intermediaries like Visa, Mastercard, and issuing and acquiring banks that extract nearly 3% of every transaction.

While Strike’s recent innovation is a compelling application of the Lightning Network, its success will depend on broad-based consumer adoption of bitcoin in commercial transactions. Because every bitcoin transaction will be subject to the capital gains tax, workaround solutions like Abra, which offers loans based on bitcoin collateral, could become important. On the other side of these transactions, we believe that merchants probably will encourage the adoption of bitcoin with discounts on goods and services.