As of March 2022, roughly one third of the companies that went public through Initial Public Offerings (IPOs) during the past four years are trading below their previous private valuations, as shown in the chart here.

In our view, these data suggest that public market investors are rejecting the late-stage and IPO valuations set by venture capitalists and investment bankers. In one notable example, prior to its failed IPO in late 2019, investment bankers valued WeWork at $104 billion, more than twice the $46 billion of its private funding round in January 2019. In 2021, WeWork went public via a SPAC at a $9 billion valuation which since has been cut in half to $4.5 billion.[1]

Importantly, because late-stage venture capital investors protect themselves against equity losses with liquidation preferences, employees are growing wise to the fact that they will bear the brunt of down rounds in the private markets and lower share prices in the public equity markets. As was the case during the WeWork debacle, we are seeing signs now that the juxtaposition of record private equity valuations against the severe valuation compression of early-stage public companies in the innovation space during the past year is hurting the ability of private companies to attract and retain talent: “Experienced hires are asking what their equity means given sky high valuations” and “candidates are turning down job offers from great companies because they see less upside.”[2]

2. Flippy and Chippy Robots Are Finding Their Way into Food Services

Labor shortages in the United States are creating opportunities for the automation of food services. Within the last month, White Castle welcomed Flippy, Miso Robotics’ burger-flipping robot, to 100 of its stores, and Chipotle began testing Chippy, Miso’s tortilla-making robot, in a number of its casual restaurants.

Wright’s Law informs much of ARK’s research, positing that cost declines spur product adoption, with industrial robots one of the most anomalous cases in point. According to our research, industrial robot costs have dropped dramatically, roughly 50% for every cumulative doubling of production, but for some reason robot demand has been fairly price-inelastic. As a result, we have learned that robot adoption depends on another variable: backward compatibility, or robot design enabling them to operate within existing infrastructures. Thanks to backward compatibility, restaurants are experimenting with and deploying robots like Flippy and Chippy and avoiding expensive bets on new systems and kitchen designs. This design principle should impact the cost declines and adoption rates of more broad-based robots like autonomous vehicles.

3. Deposits Into Ethereum’s New Proof-of-Stake Network Are Accelerating as The Merge Date Nears

Ever since Ethereum launched in 2015, the community has evaluated more efficient and effective ways to confirm transactions and commit them to the blockchain. After nearly seven years of deliberation, R&D, and delays, the transition from its current “Proof-of-Work” to a “Proof-of-Stake” mining consensus mechanism––dubbed “The Merge” –– appears imminent. Last week, in the first major signal that Proof-of-Stake is ready for action, core developers successfully simulated The Merge on Kiln, an Ethereum test network, and announced that they intend to transition the remaining test networks and ultimately Ethereum itself to Proof-of-Stake by June.

Given ether’s $350 billion market capitalization and the nearly $90 billion dollars of value now locked in decentralized finance (DeFi), the stakes associated with a successful Merge are high. New ether commitments to the Proof-of-Stake contract have surged, as shown below, suggesting the rising probability of The Merge’s success. 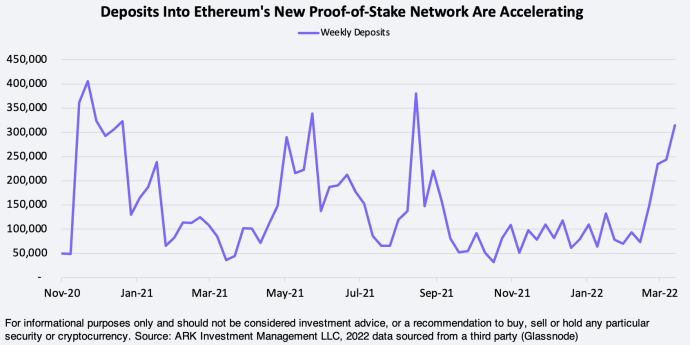 Notably, the Merge will end GPU mining on the network, perhaps with major ramifications for Nvidia and AMD. In our view, GPU sales in the gaming market have soared in response to spillover demand for ether mining.

Tags: Artificial Intelligence, Genomics
See More
See all articles
You are leaving ark-invest.com
By clicking below you acknowledge that you are navigating away from ark-invest.com and will be connected to ark-funds.com ARK Investment Management LLC manages both web domains. Please take note of ARK’s privacy policy, terms of use, and disclosures that may vary between sites.
PROCEED