While public equities in the pure-play innovation space have collapsed during the past year, late-stage private market valuations have soared. According to ARK’s analysis of 377 late-stage funding rounds between 2018 and February 2022, the median multiple from one funding round to the next has nearly tripled to an all-time high since the depths of the coronavirus crisis and has increased roughly 20% since public market equities in the innovation space began to unwind in early 2021, as shown below. As of February, during the 300 days on average from one funding round to the next, the median multiple of late-stage private companies has soared ~290%, while the NASDAQ has declined 14% and pure play innovation strategies with little or no exposure to broad based indices like the Nasdaq have plummeted. 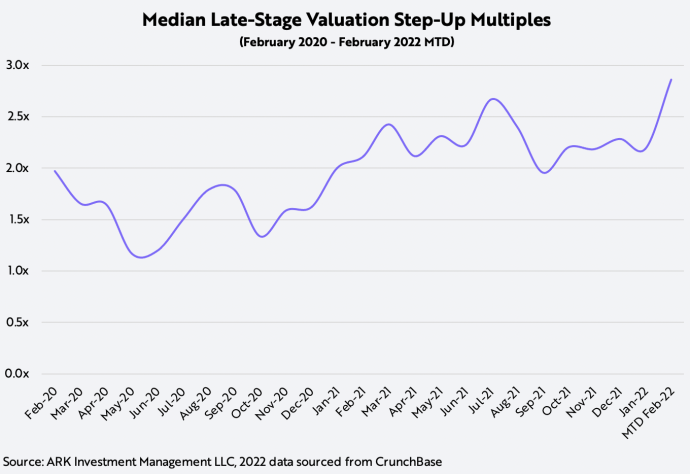 This analysis challenges recent reports of falling late-stage valuations and puzzles those of us with innovation strategies in the public equity markets. The data could be biased or somewhat outdated because CrunchBase might not have access to all late-stage private valuations and publishes them a few weeks after the pricing of funding rounds. That said, the public and private markets do seem to be at odds. In our view, the truth is somewhere in between the two.

Stay tuned for more research on the large gap between public and private market valuations and see this Twitter thread for a more in-depth analysis of step-up multiples in the private space.

Last week, a research group at Northwestern University published a study on a biosensing method that can detect a wide array of small molecules. Biosensors like DNA sequencers combine both mechanical and biological elements to detect the presence of chemical substances. Many biosensors are bulky and fragile, confining them to centralized facilities. Mobile sequencers from Oxford Nanopore and CRISPR-based diagnostic technologies like SHERLOCK can sequence and detect many nucleic acid-based pathogens, including SARS-CoV-2, in the field.

The newest biosensor builds on the authors’ existing detection platform, called ROSALIND, whose method involves a small molecule input and a free-floating genetic “switch” that causes a test tube to glow. The enhanced biosensor places organic circuits made of synthetic DNA molecules between ROSALIND’s input and output layers. By tuning the DNA carefully, researchers constructed logical operations such as “AND” and “OR”, like those in computer science. These simple logical operators work together to create a sophisticated processing layer. This layer could be programmed, for example, to glow only in the presence of two contaminants, but not a third.

Last week, Canadian Prime Minister Justin Trudeau invoked the Emergencies Act, a law that authorizes the federal government to take extraordinary measures in response to “an urgent and critical situation of a temporary nature.” This extraordinary action comes after weeks of protests by the Freedom Convoy, a large group of Canadian truckers and farmers demanding an end to coronavirus restrictions.

Under the Act, the government has ordered every financial entity in Canada, including banks, credit card companies, asset managers, crowdfunding platforms, and centralized crypto service providers, to freeze the accounts and assets of individuals involved, either directly or indirectly, in the protests.

As Deputy PM Chrystia Freeland confirmed, “The names of both individuals and entities involved in the protests have been shared by the Royal Canadian Mounted Police. Accounts have been frozen, and more accounts will be frozen.”

In our view, the Canadian government’s actions have weaponized the financial system, setting a dangerous precedent in its struggle to resolve domestic unrest and highlighting the promise of Bitcoin as a politically neutral, global, uncensorable, and transparent monetary system. Today, the financial system relies on centralized authorities to determine the eligibility of users and control the flow of transactions. While controlling capital flows can protect financial systems from malicious activity, what is malicious activity? If the government can freeze and censor one account, what is to stop it from freezing and censoring all accounts, stopping account holders from transacting globally and freely?

Canada’s action highlights the potential for looming fights between national governments and crypto broadly. While Bitcoin may be established and decentralized enough to prevail, countries may try to pass laws and create a legal structure that maintains their ability to seize, restrict, or otherwise freeze assets of their citizens that could prohibit the widespread use of public blockchain infrastructure.

4. How Will Humans Participate In The Rollout Of Autonomous Vehicles?

Automakers moving into autonomous transport are disclosing different rollout strategies. During its earnings call, CEO Chris Urmson explained that Aurora plans to remove drivers from its autonomous trucks and will not use chase cars or human-driven cars as monitors. Competitor TuSimple completed its first autonomous trucking run without drivers late last year but has deployed human-driven vehicles to survey the road ahead and monitor the truck from behind. Tesla is not planning to use a remote human operator network to help autonomous cars in times of need, skipping a step that competitors Waymo and TuSimple have announced.

So, what will be the most successful path to full autonomy? Automakers choosing to keep humans in the loop during their autonomous vehicle launches might reach an asymptote in their improvement trajectory toward better, less error-prone autonomous driving. In other words, improvement toward much better-than-human driving performance eventually may slow down, never quite reaching the number of 9s (99.999..%) of accuracy that is desired to scale robotaxi service thoroughly.  Companies that forego human-in-the-loop solutions could optimize their systems to avoid thatasymptote. After more than a year in operation, Waymo still has not expanded its commercial autonomous taxi service beyond a small area in Phoenix. Companies avoiding human-in-the-loop intermediate solutions are more likely to optimize their systems for full autonomy. As a result, it is possible that Aurora and Tesla could launch and scale their autonomous services more successfully, reducing prices faster than competitors relying on human help.

The outcomes could differ by target market. Given the extreme labor shortages in trucking, for example, an autonomous truck service with human help could price its service similarly to that with human-driven trucks, while still offering a competitive value proposition to customers in need of goods delivery.  In contrast, ride-hailing consumers may be unlikely to choose a slower human-in-the loop autonomous ride-hail service over a similarly priced Uber or Lyft vehicle.

Tune in for our Twitter Spaces this Tuesday at 5PM with Pierre Ferragu from New Street Research, where we will debate Tesla’s future in autonomous ride-hail.

5. “Tap to Pay” Could Turn iPhones Into Point-of-Sale (POS) Devices

Apple recently announced Tap to Pay, a new capability that allows merchants to accept contactless payments through the iPhone’s near-field communication (NFC) chip. Apple plans to “work closely with leading payment platforms and app developers across the payments and commerce industry,” the first of whom will be Stripe which, in turn, will extend Tap to Pay to Shopify’s POS offering.

Apple entered the payments market in 2014 with the launch of Apple Pay, a digital wallet that stores debit and credit cards and enables contactless payments. Apple takes a 0.15% cut per transaction from the bank issuing the customer’s card. According to a recent Wall Street Journal article, banks are growing concerned about Apple’s cut and want to lower the fee. In the light of this, Apple could use Tap to Pay to monetize the merchant side of a transaction by charging payment service providers like Square and Toast, as depicted below. Payment service providers, in turn, could pass the fee on to merchants who use the feature. 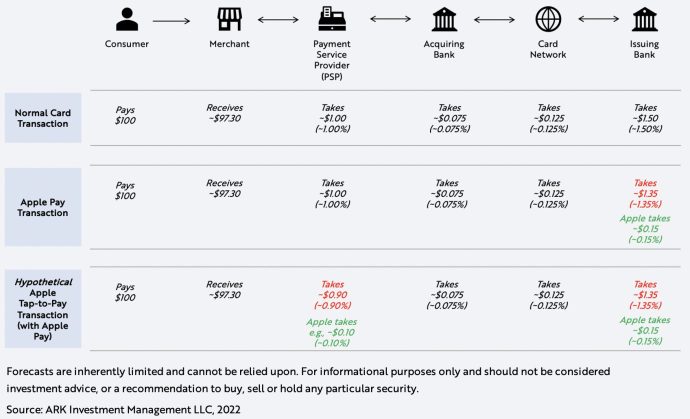 Could Tap to Pay free merchants from the need to purchase hardware equipment from payment providers such as Square, Shopify, Toast, and Lightspeed and reduce their value proposition for merchants? Probably not, in our opinion. First, over the short- and medium-term most merchants probably want to accept not only contactless cards but also non-contactless cards and cash. Second, software is payment providers’ primary value proposition for merchants, hardware mostly is a money losing business. Enabling merchants to accept contactless payments with their own Apple devices could increase the profitability of innovative payment platforms and strengthen their position as software providers. Merchants’ software and payment needs might differ depending on their size, as shown in the chart below. 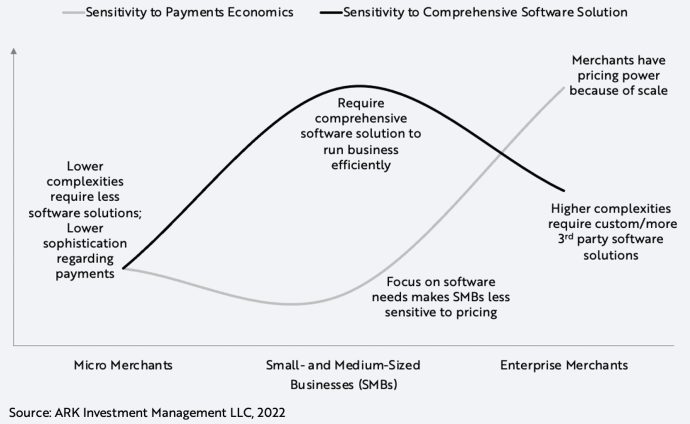