1. Are Used Car Prices in the Process of Peaking?

In November, used car prices increased yet again as the Manheim Index reached 232.5, up 43.5% on a year-over-year basis. In a previous newsletter, ARK highlighted the 13% year-over year decline in used car sales during September but noted that inventory still was well below normal levels. In November, however, as used vehicle sales slipped 2% year-over-year, inventory returned to normal levels in both the used and wholesale markets. Manheim noted that the Thanksgiving holiday impacted supply, so December’s inventory and sales could be more telling.

Given the increasing consumer preference for electric vehicles, ARK would not be surprised to see demand destruction in the used car space. Although auto manufacturers have indicated that chip supply is improving, new car sales in the US dropped from 13 million units at an annual rate in October to 12.86 million units in November, an indication perhaps that, after a sharp V-shaped recovery as consumers bought cars to avoid mass transit during the coronavirus crisis, the combined demand for new and used cars is faltering. If so, the auto debt markets could be approaching a day of reckoning.

Wastewater sequencing is a surveillance tool that could predict COVID-19 (SARS-CoV-2) case rates in communities, as shown here. While technically challenging, the method might be able to serve early warning that the case rate measured by sequenced clinical samples is about to increase.

Recently, Ginkgo Bioworks (DNA) partnered with Biobots, a company focused on wastewater epidemiology, to measure the correlation between wastewater sequencing and empirical COVID-19 case rates in all 50 states. Adapting Kallisto, a computationally intensive tool used in RNA sequencing to detect isoforms, Ginkgo and Biobots have been able to surface COVID-19 variants from the general reference.

Using Kallisto to conduct a wastewater analysis in Massachusetts, scientists discovered an intense spike in RNA virus in early December, suggesting the possibility of a significant increase in cases during the next few weeks. We will monitor the results in Massachusetts to gauge Kallisto’s success and promise.

If the results of this project are positive, Kallisto could facilitate efforts to predict public health crises, including the detection of both pathogens and chemicals at population scale. As the COVID-19 pandemic continues, wastewater sequencing could predict spikes caused by existing and emerging variants.

3. Web3.0 Could Be One of the Reasons that Offline Retail Sales Peaked in 2019

As consumers spend more hours online, spending on digital assets is likely to increase significantly. According to our estimates,[1] the percentage of discretionary time that global users spend online will increase from 38% this year to 52% in 2030. In other words, users are likely to spend the majority of their free time online toward the end of this decade. 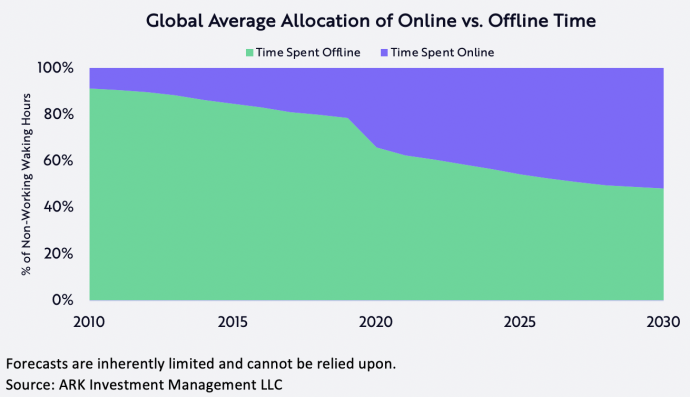 As the Web3.0 experience continues to improve, growth in online spending is likely to accelerate. Thanks to the digital property rights associated with non-fungible tokens (NFTs), for example, Web3.0 could create a new category of consumption: digital asset ownership. By 2030, the combined spending associated with both Web2.0 and Web3.0 could grow 27% at a compound annual rate from roughly $1.5 trillion this year to $13 trillion in 2030. As a result, global offline consumption could resume the decline that began at $48 trillion in 2019, as shown below.[2] 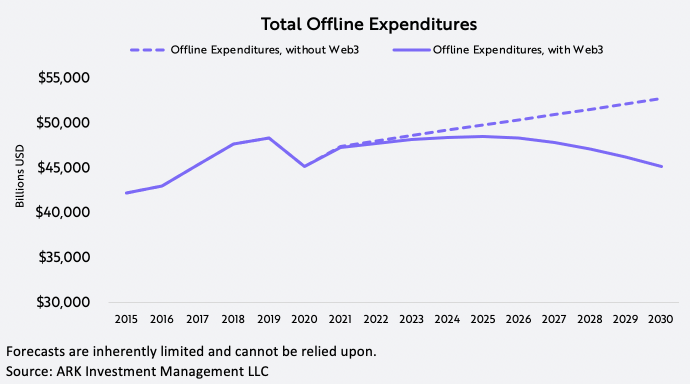