Dominant in its recent GTC keynote was Nvidia’s full blown strategy in artificial intelligence (AI). Known for its accelerated computing hardware – primarily GPUs and high-performance networking equipment – Nvidia highlighted advances in its software stack that will leverage its hardware and integrate cutting-edge AI into its products and services.

Nvidia focused most of the keynote on its Omniverse product. Targeting an audience of 40 million 3D designers, Omniverse is a collaboration tool for building virtual worlds. Like Google’s Workspace collaboration suite for editing documents, Omniverse enables designers not only to collaborate on virtual scene designs in real time but also to share virtual assets seamlessly across platforms like Adobe, Autodesk, Unity, and Unreal Engine.

These virtual worlds can be “digital twins”, replicas of physical spaces, either game-like or photo-realistic. Omniverse also offers designers the ability to simulate while prototyping and optimizing environments ranging from smart factories to 5G deployments. Among the early adopters are BMW and Ericsson.

Perhaps the most provocative announcement at the event was Omniverse Avatars. Avatars’ toolkit includes pre-trained AI models for creating digital agents that enable autonomous conversational AIs for customer service, communications, gaming, and robotics, among other use cases. On its recent earnings call, Nvidia announced that these digital robots will cost $1000 per avatar per year in a world potentially with hundreds of millions of digital avatars operating alongside humans. Notably, these avatars will be stimulating sales of Nvidia’s hardware stack as well.

2. ARK’s Research Suggests That Tesla is Three Years Ahead of the Median Electric Vehicle

ARK has created an EV Performance Index (ARK EVPI) that incorporates range, drivetrain efficiency, and total cost. Currently, the median EVPI among EVs has hit that of Tesla’s Model 3 circa 2018, as shown below. That said, in general EVPIs have improved since the Model S circa 2013.

Based on Wright’s Law, the ARK EVPI suggests that EVs should continue to improve with each cumulative doubling in production. These improvements could materialize in any of a number of ways: faster charging, longer range, and/or lower prices. 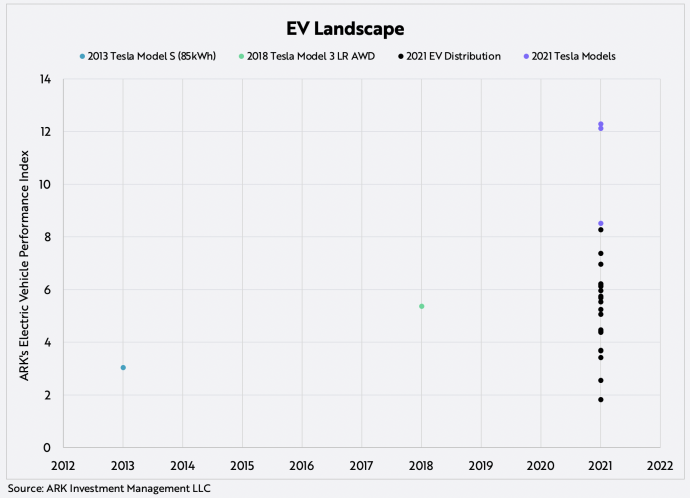 3. PASTE and twinPE Seem to Have Conquered Another Frontier in Genome Editing

One of the final frontiers in the programmable genome editing of human cells is gene insertion, a breakthrough that could treat diseases with loss of function mutations or loss of the gene itself.

Previously, gene insertions at specific sites in living human cells have caused undesirable outcomes. CRISPR Cas9 causes double-stranded breaks (DSBs) and relies on the body’s own repair mechanisms, such as non-homologous end-joining (NHEJ) and homology-directed repair (HDR). However, these approaches can cause undesirable consequences with potentially clinically relevant outcomes like translocations. Please see a range of undesirable outcomes illustrated below. 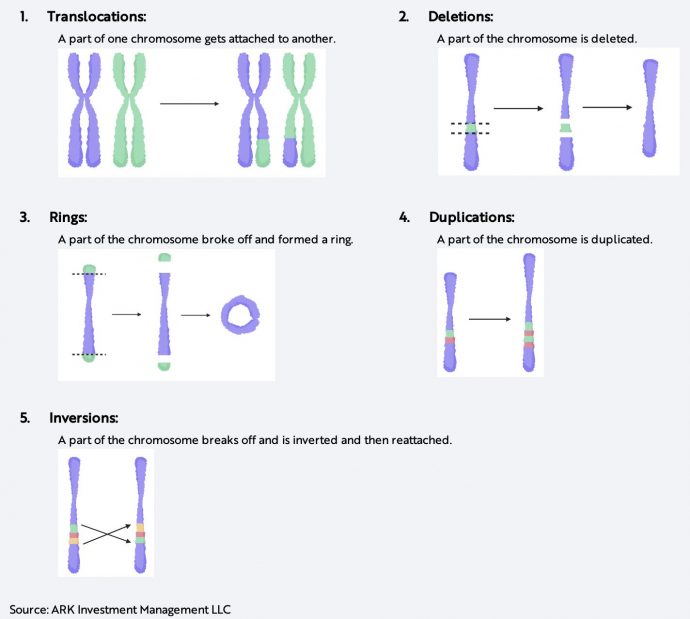 Recently, two new systems – PASTE and twinPE – that nick only one strand of DNA and facilitate large insertions have evolved. Described by Drs. Jonathan Gootenberg and Omar Abudayyeh and Dr. David Liu, respectively, both Programmable Addition via Site-specific Targeting Elements (PASTE) and Twin Prime Editing (twinPE) can insert large stretches of DNA that, in the case of twinPE, reach up to 90 base pairs. Both methods use prime editing and at least one prime editing guide (pegRNA) to install a landing site for an enzyme called a recombinase, specifically BXB1, that catalyzes site-specific recombination for DNA. The biggest difference between the two systems is that twinPE involves two pegRNAs, each of which nicks one strand of the DNA, obviating the need for the body’s own mechanisms to repair the second strand. Among their differences, PASTE tethers the BXB1 protein to the prime editor while twinPE maintains separate proteins. Both systems hold great promise for gene therapies for difficult-to-treat disease populations.

We are encouraged by the accelerated pace of innovation in gene editing that might create more functional cures for many disease variants.