Thanks to Wright’s Law, ARK has been able to forecast the rate at which electric vehicle batteries – both nickel-rich lithium-ion (NMC) and lithium iron phosphate (LFP) – should decline in cost during the next five to ten years. Despite a cumulative unit production total that is five years behind, LFP batteries already are less expensive than those with more nickel-rich chemistries. If LFP battery production were to ramp at the same pace NMC batteries did from 2016 to 2021, according to Wright’s Law and as shown below, the LFP battery cost would decline nearly 37%, from roughly $65/kWh to $41/kWh. 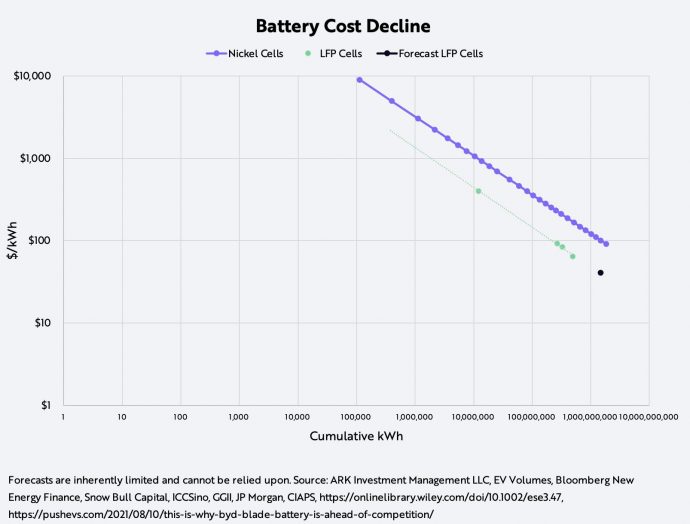 While the 28% learning rate associated with LFP batteries is consistent with other lithium-ion battery chemistries, the interesting difference is its low base. In other words, from a lower base each cumulative doubling in LFP production could be faster and easier than that for the higher NMC production level. The tradeoff for lower costs, however, will be less range than otherwise would be the case.

In its third-quarter earnings report, Tesla noted that, despite the hit to range, its standard range vehicles would shift to an LFP battery chemistry. ARK believes that Tesla is positioned uniquely for LFP chemistry because of its industry-leading drivetrain efficiency. Superior efficiency suggests that, unlike its competition, Tesla will offer acceptable range at lower prices with LFP batteries.

One year later, Meta AI’s latest multilingual model has won WMT, a prestigious multilingual translation competition. Prior to Meta’s latest model, state-of-the-art machine translation models were bilingual, trained to translate between two languages like English and German. Meta’s model was trained to translate between and among many languages, simplifying model maintenance and improving performance significantly for less well-traveled languages like Icelandic.

Increasingly, general multipurpose models are outperforming specialized models at tasks ranging from machine translation to object detection, a trend toward foundation models that we believe will continue. We would like to thank AI expert John Clippinger who joined our brainstorm this week and contributed to a rousing debate about the role that genomic data is playing specifically in and around foundation models and generally in artificial intelligence.

In 2016 Goldman ventured into retail banking, initially offering personal loans under the brand Marcus by Goldman Sachs and later adding time/savings deposits and credit cards co-branded with Apple and General Motors. For the third quarter, based on two-year annualized growth rates to normalize for the COVID crisis, Goldman reported a 33% increase in consumer banking revenues to $382 million on the heels of 43% growth in consumer deposits to $100 billion during the second quarter. In comparison and on the same basis, Square’s Cash App revenues excluding bitcoin increased 91% to $578 million during the third quarter and deposits increased 142% to roughly $3 billion, during the second quarter.

While Forbes notes that Goldman is rebranding its consumer business because customers want to be “closer to the brand“, an alternative interpretation could be internal pressures to reaccelerate growth after executive departures. Earlier this year, Goldman Sachs acquired personal loan provider Greensky to “help scale” Goldman’s “digital consumer banking platform“. In the past year, Goldman has lost key talent in its consumer and innovation departments: Marcus CFO Sherry Ann Mohan who joined JPMorgan, early Marcus employees and executives Omer Ismail and David Stark who left for Walmart’s fintech startup, and David Haber, ex-VP of Firmwide Strategy and Corporate Development who joined venture capital firm Andreessen Horowitz as General Partner.

We applaud Goldman’s efforts to evolve its strategies in the rapidly changing digital and consumer worlds, which are worlds apart from its heritage in the institutional investment world.