This week, GM’s autonomous driving division, Cruise, offered human passengers fully driverless rides for the first time and held a live event to recruit talent. Throughout the week, Cruise made several announcements. Complying with California regulations, it will test and offer autonomous rides at night from 10pm to 6am, but it did not commit to a date for commercialization. It also will design two chips for autonomous vehicles and will build in-house as much of the autonomous ecosystem as possible. According to ARK’s research, vertical integration will be critical to the success of autonomous vehicle strategies.

In contrast to Tesla’s in-person Autonomy Day and AI Day, Cruise’s on-line recruiting event provided details about its autonomous strategy in polished marketing presentations that, in our view, lacked substance. The slide below, for example, illustrated improvements in Cruise’s chip performance with an arrow, not numbers, a contrast to Tesla’s Autonomy Day presentation which included estimates for performance improvement in terms of frames per second, as shown below, as well as many more technical details throughout the presentation. While Cruise might be close to commercialization, suggesting that its underlying technology could be impressive, ARK wonders if GM’s slick marketing is successfully attracting the scarce talent necessary to pull off one of the most difficult AI projects in the world.

Source: Cruise Under the Hood 2021: Pioneering the Future of Transportation – Origin 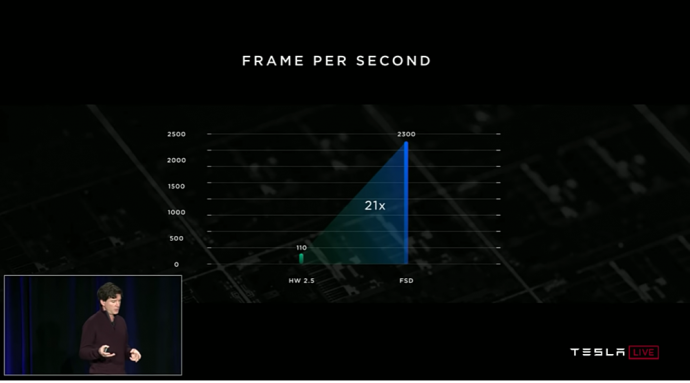 2. Commercial Labs Could Overcome the Obstacles to Tumor-Agnostic Therapy

Recently, we attended the Genetic Health Information Network Summit (GHINS), a multi-stakeholder summit including physicians, payors, diagnostic labs, and pharmaceutical companies, sponsored by Concert Genetics. On an oncology-focused panel, we debated the obstacles to tumor-agnostic therapy as well as the potential solutions.

Tumor-agnostic therapy, which targets specific molecular defects as opposed to types of cancer, is central to precision medicine. If tumors in a breast and a lung include the same DNA mutation, for example, an oncologist prescribes the same medication for both.

Immunotherapies, a type of tumor-agnostic treatment, unleash the patient’s own immune system against cancer. The most common tumor-agnostic biomarkers that refer patients to immunotherapy are tumor mutational burden (TMB) and microsatellite instability (MSI). While immunotherapies can be remarkably effective for some cancer types, many oncologists believe the results may not generalize to rarer cancers.

Unfortunately, both TMB and MSI lack standardization. Commercial labs measure TMB and MSI inconsistently, leading to different treatments and outcomes. Moreover, tumor-agnostic biomarkers do not seem to be effective in many rare cancers. Clinical trials often underrepresent rare cancers because they are rare, of course, so understandably, oncologists focused on rare cancers are skeptics of tumor-agnostic therapy. Another class of tumor-agnostic biomarkers, NTRK fusions, is difficult to detect, especially in blood samples, causing concerns about false negatives.

While hereditary BRCA1/2 mutations also are tumor-agnostic biomarkers, leading to prescriptions for PARP inhibition therapy across several tumor types, many commercial labs do not have the capacity to address both hereditary and tumor-specific mutations at scale.

Altogether, the challenges to broad based adoption of tumor-agnostic therapy range from weak evidence from clinical trials, analytical validity, and a lack of standardization to infrastructure.

In our view, many of these obstacles are tractable. Commercial labs should standardize the measurement and analysis of biomarkers like TMB and MSI based on tumor type and involve orthogonal layers of biology such as RNA and proteins. Separately, large labs should leverage their scale and match rare cancer patients with tumor-agnostic clinical trials. Finally, labs running hereditary testing should invest in infrastructure to address the bottlenecks in genetic counseling, family follow-up testing, and education.

3. AI Capability Seems to Be Doubling Every Nine Months

Applying Wright’s Law to historical data from OpenAI and NVIDIA, we discovered that the combination of innovations in both hardware and software is driving the costs of AI training down by approximately 50% every nine months. Based on our forecasts of AI hardware and software spending, this rapid rate of decline is likely to continue for the next decade.

High compute costs have been a barrier to investment in AI foundation models that should break down as training costs continue to decline. As a result, we believe AI research is likely to proliferate as more organizations re-train large models with greater frequency. This important investment is likely to extend the frontier of possibilities associated with artificial intelligence.

Last week, Cash App announced that it will offer its peer-to-peer payments, debit card, Boost and direct deposit services to teens 13 to 18 years old. Parents or guardians will have to approve the accounts and will be able to track their children’s transactions. According to Square CEO Jack Dorsey, lowering the age barrier in the US will expand Cash App’s addressable market by 20 million users. Now embedded in urban and youth culture after years of savvy marketing including partnerships with artists, brands and e-sports teams, Cash App seems like a natural fit for teens in the US.

In search of the next fintech niche, venture capitalists have plowed millions into startups offering financial services to families and teenagers. Last December, Step raised $50 million from Coatue, Stripe and Charli D’Amelio and, just four months later, followed up with another $100 million from existing investors, Will Smith, Stephen Curry and others. In September 2020, Greenlight raised $215 million while more recently Till raised $5 million from Melinda Gates’ venture fund Pivotal Ventures and Copper raised $4.3 million.

According to app intelligence publisher SensorTower, some of these family-based strategies are struggling. Thanks in part to marketing partnerships with influencers like Charli D’Amelio, Step boosted monthly active users (MAUs) from 80,000 in August 2020 to 1.3 million in April 2021 but, since then, has lost 500,000, dropping to roughly 800,000, a base similar in size to Greenlight’s.