In a typical s-curve adoption cycle, the growth of a new technology decelerates as it penetrates its addressable market, as shown below. Apple’s iPhone has been a good case in point. 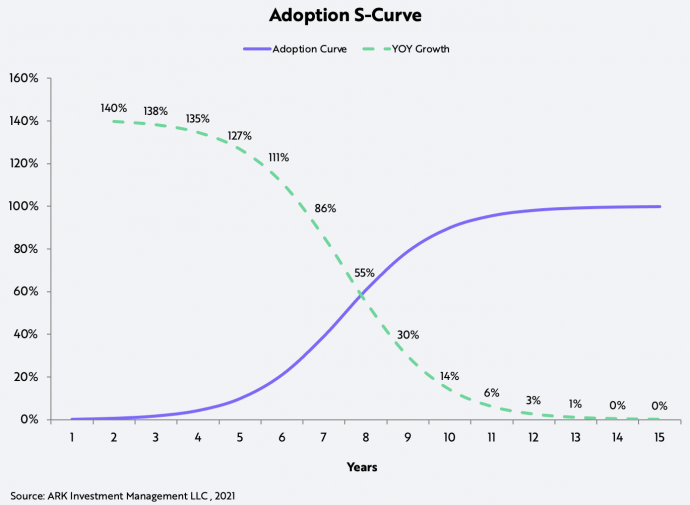 Contrary to a typical s-curve, since 2013 the growth in global EV unit sales has accelerated from 60% to an estimated 90%+, as shown below. 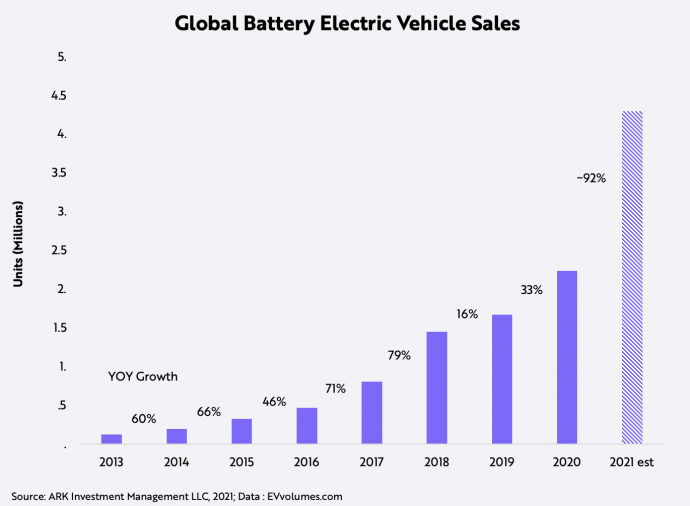 ARK’s research suggests that the acceleration in EV growth could be a function of several adoption s-curves occurring simultaneously. As battery costs continue to fall, pushing EVs across critical price points that attract new groups of buyers, new adoption cycles begin. According to our research, another major adoption cycle should kick in when EVs hit the ~$25,000 price point during the next few years.

Last week, Facebook unveiled plans to build out the/a/its Metaverse. Signifying its importance, Mark Zuckerberg announced that Facebook would rebrand as ‘Meta’. According to Zuckerberg, the Metaverse is “going to be the successor to the mobile Internet”, a space where “you’re going to be able to hang out, play games with friends, work, create, and more.” To realize his vision, Meta plans to spend billions of dollars creating and scaling new technologies and experiences, most importantly augmented and virtual reality.

From our perspective, first and foremost, rebranding around the Metaverse is an attempt to change the negative narrative that has shrouded Facebook since the Cambridge Analytica scandal. Second, positioning itself as a leader in augmented and virtual reality, Meta is trying to extricate its business from dependence on Apple and other mobile OS operators. Last, and perhaps most important according to Mark Zuckerberg, the Metaverse could become the next big leg of growth on the internet.

Facebook’s announcement begs many questions, the most important ones around ownership and portability of virtual personae and goods. Will Meta create an open or closed Metaverse ecosystem? User-owned data and interoperability are features that we believe will define the Metaverse, giving users control over their virtual assets. In a perfect Metaverse, users should be able to jump from one virtual world to another, enjoying ownership and portability much like we do in the physical world today. As for interoperability, what if Mark Zuckerberg means that companies will have to abide by Meta’s new standards and protocols?

In our view, the answer will lie in decentralization. Protocols like Ethereum should become decentralized validators of virtual goods and worlds. Adopting and building upon decentralized standards will be key to Metaverse’s success.

3. Apple and Amazon Are Losing Billions of Dollars to Supply Chain Bottlenecks

Last week, Amazon and Apple reported revenues for the third quarter that fell below analysts’ expectations because of supply chain issues. Both announced that these issues are likely to get worse before they get better.

According to Apple, COVID-19 related downtime in manufacturing and chip shortages prevented it from meeting customer demand for iPhones and other products, hitting revenues by roughly $6 billion, or 6.7%. Now Apple is forecasting that supply will not meet holiday demand, hitting revenues by more than $6 billion during the fourth quarter.

Amazon estimated that labor shortages and higher materials and shipping prices added $2 billion, or 4.8%, to operating costs during the third quarter and could hit the fourth quarter by $4 billion, or 9.6%. To entice 150,000 seasonal employees this holiday season, Amazon also is boosting wages and benefits. To encourage holiday shoppers to buy gifts well before Black Friday, Cyber Monday, and the last few weeks of the season, it is accelerating its holiday advertising schedule.

While missing expectations for total revenues, both Apple and Amazon reported better than expected results from services. Fueled in part by surprise hit Ted Lasso on Apple TV+, Apple Services increased 25.9% year on year, while revenue growth rates in Amazon Advertising and Amazon Web Services reaccelerated to 49% and 39%, respectively.

As fake images become indiscernible from real images and GAN disinformation campaigns proliferate, many research organizations are building tools to detect false media assets. Defense Advanced Research Projects Agency (DARPA) has a semantics forensics (SemFor) program while, in academia, the University of Maryland has created a StyleGAN2 inversion technique with the thesis that perfection likely indicates that a GAN generated the image. In our view, GANs will continue to evolve, and researchers will deploy increasingly aggressive techniques to detect fake images.