1. Tesla Continues to Build Brand Value and Expand its Margins

Last week Interbrand released its Best Global Brands 2021 report, as summarized in the chart below. At $36 billion, Tesla is the 14th most valuable and fastest growing brand in the world. Last year alone, its brand value increased 184%, notable because we believe Tesla spends nothing on traditional brand advertising. 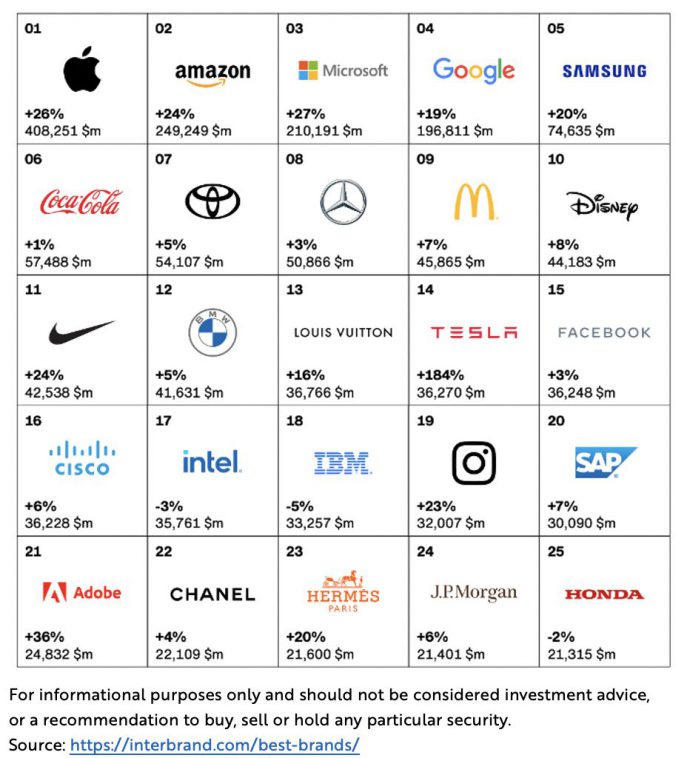 This week, Tesla also reported third-quarter earnings including an automotive gross margin excluding regulatory credits of 28.8%, up more than 1000 basis points from 17.2% two years ago. At that time, ARK published a blog explaining that, based on Wright’s Law, Tesla should be able to boost that margin to 30%+ as it scales production in both Berlin and Austin, Texas. While the ride may not be smooth given the execution risks associated with new factories in new geographies, in our view Tesla’s margin expansion has further to go.

This week, President of Y Combinator and CEO of OpenAI, Sam Altman, announced Worldcoin, a new global cryptocurrency to be distributed fairly. Scaling as rapidly as possible, Worldcoin will allow all individuals in the world free claim to a percentage of the currency if they can prove they are “unique humans” through a device called “The Orb”. As outlined on its website, “The Orb captures an image of a person’s eyes, which is converted into a short numeric code, making it possible to check whether the person has signed up already. If not, they receive their free share of Worldcoin.” Devising their own user onboarding strategies, individuals will be able to activate Orbs and run independent operations in their own communities.

Capped at 10 billion units, Worldcoin will be a layer 2 offering on the Ethereum network. Accordingly, the team will distribute 8 billion units globally, reserving 2 billion units for the Worldcoin foundation and investors.

Worldcoin’s announcement has sparked controversy in the crypto community, privacy experts raising concerns about its ambiguous data policy and cryptocurrency advocates questioning its attempt to distribute coins “fairly” while reserving such a large share for a centralized operation and institutional investors. ARK also is skeptical, as Worldcoin seems to be fostering a UBI (Universal Basic Income) token instead of decentralized digital money.

That said, when it launches Worldcoin could encourage individuals to experiment with public and private key cryptography, offering a bridge to the broader cryptoasset ecosystem. In turn, cryptocurrencies like bitcoin could benefit as investors learn how differentiated it is relative to Worldcoin.

Last week, Allogene Therapeutics reported that one patient on its anti-CD19 off-the-shelf CAR T-cell therapy, ALLO-501A, suffered from a ‘chromosomal abnormality.’ With stage IV follicular lymphoma, the patient already had failed two therapies and radiation but had a partial response (PR) to ALLO-501A. A biopsy of the patient’s bone marrow surfaced the chromosomal abnormality, at which point the Federal Drug Administration (FDA) put Allogene’s pipeline on clinical hold but, interestingly, did not extend the hold to Cellectis, the company from which Allogene licensed its technology.

In other CAR T-cell news last week, CRISPR Therapeutics announced that its anti-CD19 off-the-shelf – or allogenic – CAR T-cell therapy targeting B cell malignancies achieved a 58% overall response rate (ORR), which is similar to that for autologous therapies. Our concern is that simultaneous edits of double-stranded DNA could cause chromosomal abnormalities, a risk that base editors which have shown fewer translocation rates to date might mitigate.

Understanding the FDA’s expectations prior to its approval of allogeneic CART-cell therapies will be important. Although no allogeneic therapies have been approved to date, we have high hopes for the science and ultimately expect it to expand access and save lives at a fraction of the costs necessary today. Importantly, allogeneic CAR T-cell gene editing could cure solid tumors, which account for 88% of all diagnosed tumors.

This week, news broke that PayPal might be in talks to acquire Pinterest for $40 to $45 billion. If true, the combined companies will try to leverage each other’s strengths and build a social-commerce powerhouse. In theory, PayPal would provide Pinterest with a fully integrated checkout solution and a better in-app shopping experience for their combined 825 million users.1Important to consider, however, would be the loss of a neutral and unbiased platform.

From a merchant’s perspective, while Pinterest might boost sales, isn’t the ability to sell goods and services simultaneously on every social media site fulfilling the real dream? Companies like Shopify already are offering horizontally integrated e-commerce solutions. Indeed, Shopify and Pinterest already have a partnership.

We believe from PayPal’s perspective, moving up the e-commerce funnel by embedding product discovery and likely charging a take-rate for sales could rescue it from exclusive dependence on the increasingly competitive bottom end of the funnel. PayPal already has the two key assets necessary to include commerce in its planned digital wallet, 371 million consumers and 32 million merchants, as CEO Dan Schulman described during this year’s investor day. We are wondering, therefore, why PayPal would pay $45 billion and take on substantial execution risk to add consumers and merchants at the margin.

Update: As of Monday 10/24/21, PayPal put out a press release stating that “it is not pursuing an acquisition of Pinterest at this time.”

1 Pinterest reported 454 million monthly active users as of Q2 2021, PayPal reported 371 million annually active consumer users as of Q2 2021. There likely is significant overlap between the two groups of users, so the number of unique users might be lower than 825 million.