DeepMind, an AI research subsidiary within Google (GOOGL), has released a powerful software tool called Enformer that could impact the field of genetics profoundly. Enformer uses data from DNA sequencing to predict levels of gene expression.

Recall that DNA is transcribed, or expressed, as RNA before eventually becoming protein. Scientists want to understand how DNA mutations occurring close to and far away from different genes alter the expression of RNA inside a cell.

Many state-of-the-art tools for predicting gene expression, such as Basenji2, are based on convolutional neural networks (CNNs) which struggle to incorporate information from distant regions in the genome. Enformer uses a modified transformer architecture that leverages natural language processing (NLP) principles and has a field of view five times larger than that of Basenji2. As a result, it has improved the prediction of gene expression one third of the way towards “experimental ground truth”.

Last Monday, Facebook suffered an outage that took down all its services, including Instagram and WhatsApp, for a majority of the day. During a routine maintenance exercise and while issuing an innocuous command to check traffic on Facebook’s backbone network, an engineer inadvertently requested that all services be disconnected from the public internet. Without the ability to access the proper servers remotely or to use internal tools to triage the issue, network engineers had to gain physical access to a Facebook datacenter to remediate the issue. The outage was so widespread that other websites like Twitter suffered significant performance degradations as users flocked to them to understand the reason for outages at Facebook, Instagram, and WhatsApp.

Monday was a stark reminder of how much its nearly 3 billion users rely on Facebook’s services to stay connected and conduct business. Importantly, it illustrates the drawbacks of centralized systems and highlights the value of decentralized networks.

On Thursday, Manheim updated its Used Vehicle Value Index, which, and as shown below, reached an all-time high in September. That said, the number of used vehicle sales dropped 13% year over year, perhaps a harbinger of future price changes. 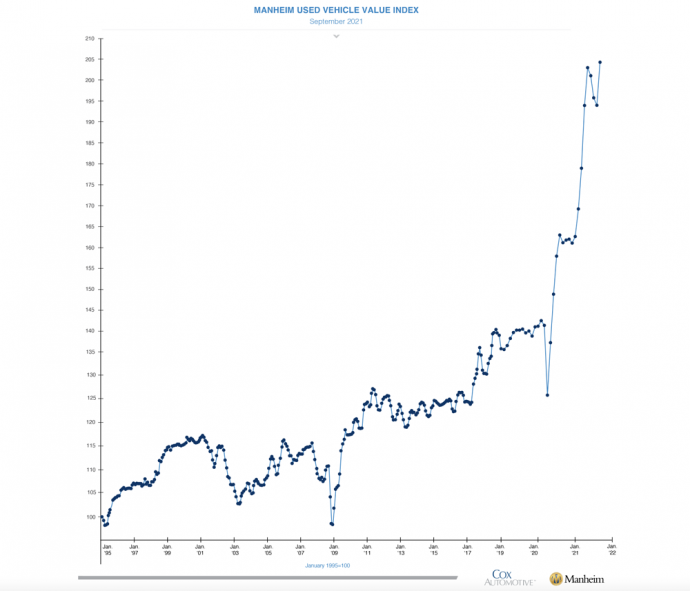 A broader trend that could be forming is that price inflation shifts consumers toward the adoption of deflationary technologies more quickly than otherwise would be the case. Traditional automakers point to the chip shortage as the reason for declining car sales, but they could be surprised if demand for gas powered vehicles does not bounce back as quickly as expected, as the transition to electric vehicles accelerates.

Today, the most popular series on Netflix is ‘Bridgerton’, which 82 million households viewed during its first four weeks on the platform. According to Co-CEO Ted Serandos, however, a new original series produced in South Korea, ‘Squid Game’, is on pace to become Netflix’s most-watched series ever. As seen in the chart below, Google search volume confirms Serandos’ comments, suggesting that the series will pass 100 million viewing households. 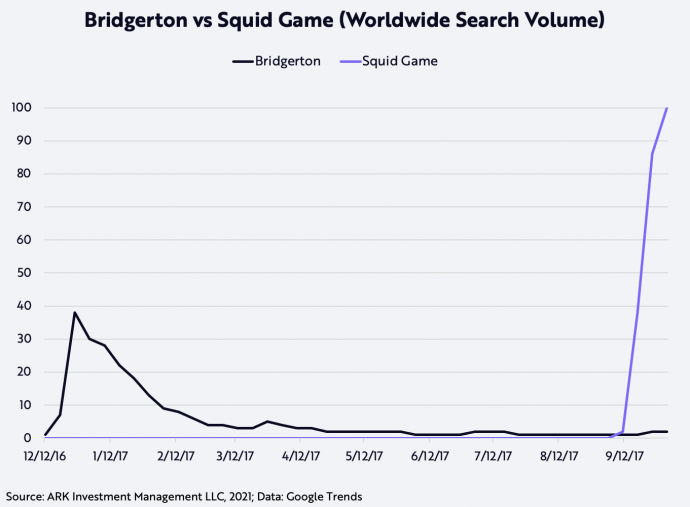 5. Google Halted Its Plans to Roll Out Bank Accounts

Google has canceled Plex, its banking product for the Google Pay digital wallet. Announced in 2020, Google Plex aimed to provide a front-end consumer banking experience for users through partner banks and credit unions including Citigroup and the Stanford Federal Credit Union.

Instead of competing with them, Google planned to “partner deeply” with banks and integrate with existing financial infrastructure. Partner banks, on the other hand, hoped to leverage Google’s tech expertise and provide users with a well-designed mobile experience. With a waitlist of roughly 400,000, the planned product received significant user interest.

According to the WSJ, Google decided to halt the project after management departures and missed deadlines. In our view, another reason might have been Google’s decision to avoid conflicts with some of its largest advertising and cloud customers, the banks.