According to ARK’s research, since 2004 the cost of satellite bandwidth has dropped 7,500-fold from $300,000,000/Gigabits per second (Gbps) to $40,000/Gbps. ARK’s research suggests that it could fall another 40-fold during the next five years to ~$1,000/Gbps thanks to Starship, SpaceX’s next-generation rocket, and its next-generation satellites, as shown below. 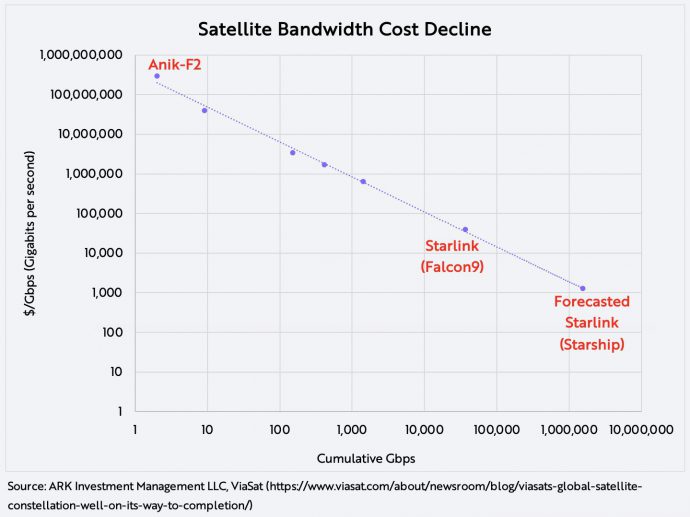 We can measure the capital cost of satellite networks in terms of $/Gbps, pointing to the pricing necessary for a given return. Currently, SpaceX’s Starlink satellite service offers customers a download speed of roughly 100 megabits per second (Mbps), each Gbps of capacity theoretically serving ten customers at 100 Mbps. Because users are not online 24/7, SpaceX is likely to “oversubscribe” the service. We believe that at an oversubscription ratio of 20, 1 Gbps could serve 200 customers at a capital cost of ~$1,000/Gbps, suggesting that SpaceX could recoup its investment with a one-time charge of $5 per customer.

This back-of-the-envelope calculation does not incorporate satellite lifespans, satellite utilization, and ground-based infrastructure costs, all of which will impact costs and pricing decisions. Amortization of a satellite with a 15-year lifespan, for example, could be much lower than that of one with a five-year lifespan, while the utilization of low earth orbit (LEO) satellites orbiting over uninhabited parts of the earth could be much lower than that of geostationary orbit (GEO) satellites orbiting at the same rate as the earth. Lastly, this early analysis does not incorporate the cost of ground infrastructure, particularly end-user antennas.

Importantly, according to ARK’s research, since 2004 satellite bandwidth costs have dropped roughly 40% per year and will continue do so, potentially pushing satellite-delivered broadband toward mass-market adoption for the three billion people around the world who do not have access today.

The first announcement, to which CEO Jack Dorsey hinted last month, is a bitcoin tipping function. Mobile iOS users now can add their bitcoin lightning wallets or bitcoin addresses to their Twitter profiles to send and receive tips in bitcoin, turning Twitter, in our opinion, into one of the best global micropayment experiences in the world. Enabling free, instant, global payments for its users in the absence of centralized financial institutions, we believe Twitter is accelerating Bitcoin’s interoperability, pushing it one step closer to the internet’s native monetary standard.

Second, Twitter announced the impending addition of a non-fungible token (NFT) verification feature. With no details on its implementation or timing, we are excited about the possibilities. As the NFT market boomed during the past year, traditional social media sites like Twitter have been showcasing NFT ownership through user avatars. The problem that Twitter will address is that users today can change their avatars without owning the underlying NFTs. A verification feature could help NFT holders prove ownership and signal status, much like Twitter’s current verification badge system.

Historically, to tackle agricultural pest control, agrochemical developers have focused on small molecule fungicides, herbicides, and insecticides, each of which has raised questions. While the degree of target-specificity has improved over time, regulators and activist organizations have expressed concerns about their impacts on human and environmental health. As a result, the race is on to find cheaper, more specific, and easier-to-develop crop protection technologies.

RNA interference (RNAi), a natural cellular process, could be that technology. RNAi occurs when double-stranded RNA (dsRNA) is introduced into cells of eukaryotes like plants, insects, fungi, and animals. Because dsRNA is involved in viral infection, cells sense danger and have evolved ways to detect and destroy it. Once destroyed, the remaining fragments of dsRNA are loaded into the “RNA-induced silencing complex” (RISC) which uses them like the “ctrl-f” function on a word processor to find and destroy other molecules of the same origin.

Researchers at Greenlight Bio have found genes critical to the survival of certain pests and are genus-, or even species-specific in their action. In response to spraying the dsRNA of these genes over fields, the pests turn their own RISCs against themselves, silencing their critical genes and causing their own demise. Posing little risk to humans and the environment, the sprayed dsRNA lasts only days in the field before degrading naturally.

In addition to crop protection, breakthroughs in RNA synthesis could disrupt vaccines and therapeutics, so stay tuned for our research on those topics.

4. Artificial Intelligence Can See Around Corners

A recent study demonstrated that convolutional neural networks can determine with 94% accuracy the number of people and the kind of activity taking place in the hidden space of a room. Developed by NVIDIA, MIT, and the Technion Israel Institute of Technology, the models analyzed changes in indirect illumination imperceptible to humans captured by video cameras pointed at a single interior wall, without line-of-sight to the hidden scene. The researchers published a video demo here.

In a separate study, Emory, MIT, and others trained deep learning models to predict a patient’s self-reported race from highly degraded medical images in X-rays and CT scans. Similarly, these models detected and learned features not visible to humans. Conducted to demonstrate the risks of ethical bias associated with AI, the second study resulted in a broader insight: AI models can detect imperceptible visual features and perform classification tasks with superhuman accuracy.