In 2018, ARK wrote that Tesla’s strategy of vertical integration would enable it to create novel use cases, deeper moats, and faster execution. At the time, Tesla controlled all of the hardware stack except for semiconductors: Nvidia provided the chips for training and self-driving.

At AI Day, an event focused on recruiting top artificial intelligence talent, Tesla unveiled an ambitious plan to complete the vertical integration of every component of its hardware and software stacks, from silicon, training cluster and compiler to driving simulator. If fully implemented in 2022, Tesla would be the most deeply integrated “automotive company” in the world, as shown below. 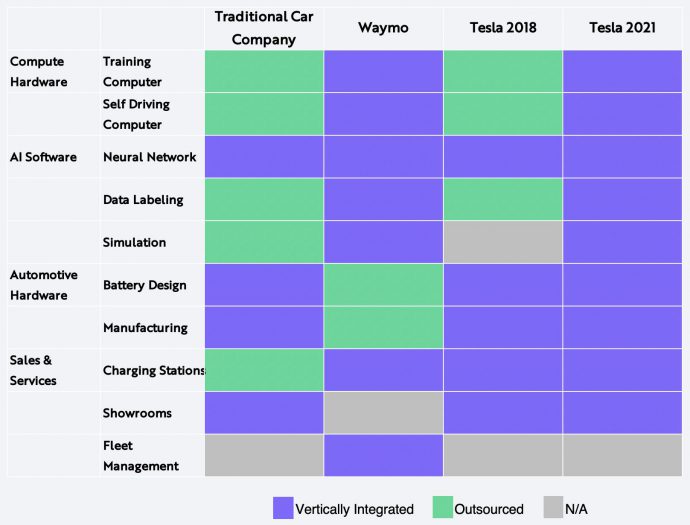 Forecasts are inherently limited and cannot be relied upon. For informational purposes only and should not be considered investment advice, or a recommendation to buy, sell or hold any particular security. Source: ARK Investment Management LLC.

Tesla pulled back the curtain on Dojo — its custom-built AI training supercomputer capable of 1 exaflop of performance, roughly twice the raw performance of the most powerful supercomputer in the world today. Dojo is centered around the D1, an application-specific chip (ASIC) designed from the ground up specifically for AI training, optimizing for low latency and high bandwidth. With System-on-Wafer packaging technology similar to that of Cerebras, Tesla combines 25 D1s on a single training tile for a whopping 9 petaflops of compute. A bespoke compiler designed to harness the D1’s custom instruction set architecture should be able to train Tesla’s neural nets with best-in-class hardware utilization.

We believe that by owning the AI stack – from training silicon to labeling to neural network design – Tesla should be able to iterate much faster than the competition. Not hostage to third parties shipping chips or fixing bugs, Tesla will be in full control.

Special thanks to James Wang for co-authoring this update.

2. Neomers Could Offer a New Pathway to Earlier Cancer Detection

Recently, a group of researchers published a preprint showcasing neomers, a unique and clever new biomarker for detecting the presence of cancer. While the paper has not been peer-reviewed yet, we believe the potential benefits of this approach could be profound.

Neomers are short (16-letter) sequences of DNA that do not appear naturally anywhere in the human genome. The authors hypothesized that cancer-associated mutations create neomers which, in turn, might enable early detection. After studying roughly 2,600 cancer genomes, the researchers trained an AI model using neomers. Shockingly, they discovered that different cancer types had unique neomer ‘fingerprints’, enabling the algorithm to determine the location of tumors.

Typically, cancer screening tests based on next-generation sequencing (NGS) require very deep sequencing: the sequencer must generate redundant data to detect mutations and then map them to the correct locations in the genome. Because this new method focuses only on the presence of neomers, not their locations, the test costs should be substantially lower than the status quo.

Despite this optimism, we note that the researchers based their paper on a small, retrospective patient population and, as mentioned, has not been peer-reviewed. We are planning research on this topic and will publish our findings in the coming weeks.

3. Horizon Workrooms Offers a Glimpse into Facebook’s Vision for the Future

This week Facebook released a new app for its Oculus Quest headsets, Horizon Workrooms, a virtual workspace in which to connect teams. Currently in “open beta,” Horizon Workrooms are virtual meeting rooms in which individuals and their avatars can interact in an immersive and collaborative experience. Check out Mark Zuckerberg’s demo.

With features like spatial audio, hand tracking, passthrough camera feeds, and plenty more, we believe the app is beginning to transform digital immersion. Although it is not a game-changing must-have application yet, Horizon Workshops does provide a glimpse into the future or, at least, Facebook’s hope for the future.

After missing the vertical integration associated with desktop and mobile computing, Facebook is going all-in on virtual and augmented reality, VR and AR, respectively. In addition to apps like Horizon Workrooms, Facebook owns and operates Oculus and has been aggressive in making VR- and AR-related acquisitions. In fact, roughly 20% of its employees are working on either VR or AR.

Positioned as a vertically integrated player in VR and AR, it appears Facebook hopes to own the next generation of internet experiences. Or, as Mark Zuckerberg would say, “In the coming years, I expect people will transition from seeing us primarily as a social media company to seeing us as a metaverse company.”