#282: Prime Editing Could Accelerate the Time to Potential Cures for Disease, & More

1. Prime Editing Could Accelerate the Time to Potential Cures for Disease

Prime editing (PE), the latest gene editing technology to emerge from Dr. David Liu’s labs at the Broad Institute, Harvard University, and Howard Hughes Medical Institute (HHMI), adds new functionality to the CRISPR-Cas9 protein. Thanks to the new functionality, prime editing could treat many more rare and complex diseases. The summary below describes this new wave of gene editing in detail that may not be easy to digest on a busy Monday morning. Just know that the progress in gene editing is astonishing and holds the promise of curing many diseases, including cystic fibrosis.

In living cells, PE can copy parts of a DNA sequence into a targeted site without cutting the DNA’s double-strand, or double helix. Double-strand DNA breaks can cause uncontrolled “indels”, insertions and deletions, as well as cell changes like translocations, p53 activation, chromothripsis, and other deletions at the target site. Like base editing, its predecessor, PE avoids these undesired outcomes.

A prime editor involves a disabled CRISPR-Cas9 protein—which cannot make double-strand DNA breaks but can be targeted by a guide RNA—attached to an engineered enzyme known as reverse transcriptase. Transcription describes the process by which a DNA template produces RNA, while a reverse transcriptase does the opposite— writing DNA with an RNA template. 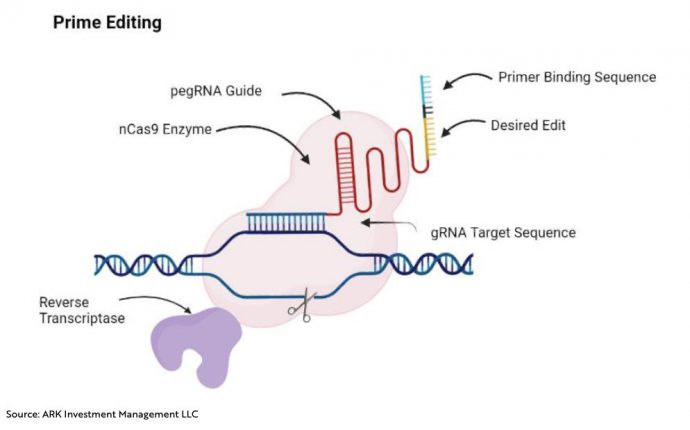 Because researchers can direct any sequence with dozens of nucleotides to replace the starting sequence, PE is more precise and versatile than CRISPR-Cas9. The latter disrupts genes but does not correct them. Several publications from independent laboratories have corroborated that PE is much less prone to off-target editing than CRISPR-Cas9 alone.

In 2019, David Liu’s team published its first PE study which since has gained significant traction in both general interest and academic circles. According to our research, more than 1,000 labs have adopted PE technology and published more than 50 research publications and preprints involving a wide range of organisms, including adult mammals. Scientists at the Hubrecht Institute, UMC Utrecht, and the Oncode Institute, for example, published that, using PE in cultured human stem cells, they had corrected the mutations that cause cystic fibrosis.

Although in early days, ARK believes that prime editing has the potential to cure many diseases.

2. Why Did Square Acquire Afterpay?

Although we were surprised by its size, this acquisition could enable Square to launch its proposedly planned Cash App payments network and to allocate its scarce resources to other strategic efforts like Bitcoin and DeFi that will benefit both the Cash App and Square seller ecosystems. Earlier this year, Square hired many software engineers to build “the fastest, most reliable, and easiest to use…most-sought after payment network in the US” as well as many sales people to “influence senior decision makers at the largest retail businesses and financial institutions in the world”. In essence, Square is building the merchant or supply side of a payments network to supplement Cash App’s already established 70 million annual active user base on the demand side of the network. Already integrated into a 100,000-strong merchant network globally, Afterpay should help solve Square Cash App’s supply side problem. Afterpay also has integrated Stripe and Adyen which should allow Cash App’s 70 million users to connect with millions of other online and offline merchants. In other words, this acquisition will marry Cash App, Square’s consumer brand with an extensive merchant distribution network, potentially creating a strong two-sided network.

We want to highlight three key benefits for Square’s Seller and Cash App ecosystems that could result from the acquisition, besides possibly solving for Cash App’s payment network.

3. OpenAI Unveils the Next-Generation of Codex

Throughout history, the evolution of programming languages has abstracted away complexity continuously. While a simple calculator application might have required thousands of lines of code 30 years ago, today a few lines of JavaScript can create a functional, albeit rudimentary, calculator.

We believe OpenAI Codex is the next step forward. A sibling of GPT-3, the latest version of Codex is like Google Translate for code. A human can input English language commands like “Create a login page” and Codex will create functional software code. At a demo earlier this week, OpenAI showcased Codex creating a simple “hello world” webpage and a 2D, keyboard-controlled game. Thanks to fine-tuning on a large corpus of open-source code, the latest version boasts code completion accuracy of 37%, a 10-percentage point improvement over the last generation.

While it may not solve the shortage of talent in software development, Codex does promise to multiply the productivity of software engineers and to help non-technical knowledge workers build products and solve problems that historically would have required engineering resources. In our view, Codex points to a future in which knowledge workers partner with AI-powered software to boost productivity significantly.