1. Venture Capital Investments Hit a Record in the First Quarter

At nearly $130 billion globally, venture capital (VC) investments hit a record during the first quarter, according to KMPG and PitchBook. As companies and investors doubled down on VC opportunities, follow-on investments accounted for 93% of the total invested, also a record high.

While VC activity has been increasing rapidly in recent years, the COVID-19 pandemic seems to have accelerated the pace thanks to the proliferation of technologies that private companies have developed to solve problems created by the coronavirus. Adding to the boom have been record low interest rates and the staggering returns that some VC firms have enjoyed as their companies have gone public during the last 12 months.

As a result, the competition in venture capital has intensified. In late-stage VC, median deal sizes and pre-money valuations roughly doubled on a year-over-year basis last quarter.

Some analysts attribute the explosive growth in VC to hedge funds and other public-private investors. In 2020, crossover investors – those historically focused solely on public markets but now investing also in private companies – participated in 36% of US VC deals, nearly four times the ~10% in 2018. For example, hedge fund Tiger Global is outpacing the cadence of large venture capital funds like Andreessen Horowitz and Accel, according to our analysis of CrunchBase data, because it often does its research on private companies before meeting them, makes decisions in days or hours instead of weeks, and typically outbids competitors.

In its first quarter earnings call last week, Tesla stated that the Model Y could become the best-selling vehicle globally based on revenue in 2022 and on units in 2023. For context, in 2019 the Toyota Corolla topped the list with 1.5 million units, roughly triple the number of all Tesla vehicle sales last year. Because the Model Y is roughly twice as expensive as the Corolla, Tesla seems to be forecasting 750,000 units in 2022 and 1.5 million units in 2023, nearly 10X and 20X the 86,000 units sold, respectively, in 2020.

Notably, Tesla did not change its guidance for the year despite a global semiconductor shortage that is impacting nearly every automaker. Ford, for example, is cutting its second quarter production plans by roughly 50%. Thanks to its vertical integration and rapid work-around strategies, Tesla seems to be navigating the shortage effectively. Specifically, it has pivoted to firmware for microcontrollers made by new suppliers. As a result, we believe Tesla could increase its market share significantly this year.

During its quarterly call, Tesla also disclosed a shift away from radar in its Full Self Driving (FSD) beta Autopilot software. Echoing the reason that Tesla decided not to incorporate LiDAR initially, Elon Musk explained that fusing camera and radar signals adds unnecessary complications given the precision of cameras.

3. How Safe Are Gene Therapies?

Gene therapy holds the promise of curing disease and revolutionizing health care. In these early days, however, scientists must focus on its safety.

Recently, scientists at the Francis Crick Institute used CRISPR Cas9 to edit embryos and found off-target edits, or unintended changes to the genome, in 16% of them. These off-target edits suggest that more detailed sequencing techniques, perhaps long read sequencing, will be necessary to ensure the safety of gene-editing.

Adding more trepidation to the debate, several companies including Blue Bird Bio have reported serious adverse events (SAE) from their gene therapy trials. Interpreting whether the SAEs are a function of gene therapy or pre-existing conditions/external factors will be important. Again, long-read sequencing, which is more comprehensive and reliable than short-read sequencing, could provide some important answers.

Adding to concerns this week, Adverum Biotechnologies announced that a patient went blind in one eye following the company’s gene therapy for diabetic macular edema. While the company will investigate, both the adeno-associated virus (AAV) drug delivery vector and ocular gene therapy are mature technologies. In fact, in 2017 the US Food and Drug Administration (FDA) approved Luxturna, a gene therapy for a rare form of hereditary blindness.

Recently, ARK estimated the number of active gene therapy clinical trials at 712, 238 of them initiated in 2020. As the shift to gene therapy trials continues, monitoring their safety profiles will be critical.

Ether hit an all time high at $2,800, pushing the second largest cryptocurrency’s market cap to more than $320 billion. In our view, ether’s price has broken out for a number of reasons, among them the following:

Increased Institutional Interest:
During the last two weeks Four Ether ETFs launched on the Toronto Stock Exchange, making it easy for institutions to gain access as demand for crypto exposure broadens beyond bitcoin. In addition, institutions and companies like the European Investment Bank and Visa have validated the Ethereum blockchain by announcing issuance and settlement use cases, respectively.

Strong On-Chain Signals:
Usage of the Ethereum network is increasing and, by some measures, outpacing that of Bitcoin, as shown below by the number of active wallets and total transaction fees. In our view, Decentralized Finance (DeFi) and Non-fungible tokens (NFTs), both of which are burgeoning, explain Ethereum’s recent breakout. 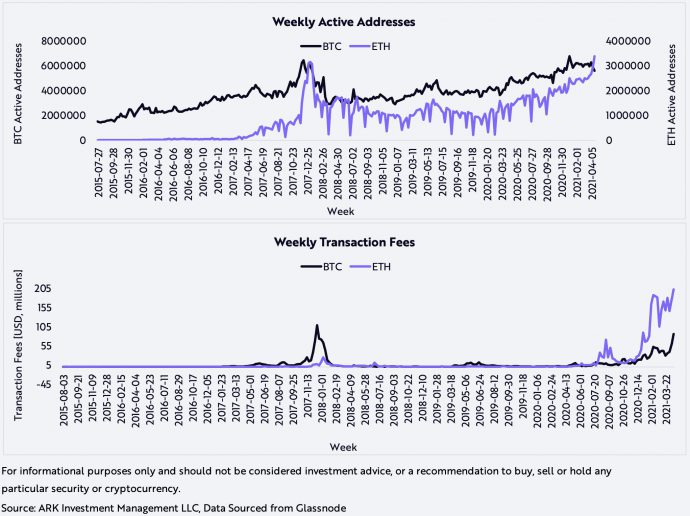 Imminent Protocol Upgrades:
Slated to go live in July, Ethereum Improvement Proposal (EIP) 1559 will change Ethereum’s transaction fee model significantly. Aiming to lower the volatility of Ethereum’s fees, EIP-1559 introduces a mechanism to burn some transaction fees, detracting from circulating supply and introducing deflation to the Ethereum ecosystem. The impact on ether’s price could be like that associated with a Bitcoin halving event.

Additionally, EIP-1559 could become a contentious upgrade, as miners will bear the brunt of fees burned. A miner revolt could impede the progress of the EIP-1559 upgrade.