This week, both the Center for Disease Control and Prevention (CDC) and the U.S. Food and Drug Administration (FDA) put a pause on the administration of Johnson & Johnson’s (J&J) adeno virus vaccine. J&J uses DNA from the SARS-CoV-2 spike protein as well as an adenovirus to incite an immune response.

Trials cannot predict all the symptoms and side-effects that mass market vaccinations will cause. After receiving J&J’s vaccine, for example, six women between 18 and 48 years old suffered from a rare blood clot – Cerebral Venus Sinus Thrombosis (CVST) – 6 to13 days later.

Acting FDA Commissioner, Janet Woodcock, believes that the pause will last just days. We believe her confidence could be informed by the fact that the odds of developing a CVST from J&J’s vaccine is 0.000088%, lower than the 0.0005% risk to the entire US population on any given day.

2. Could A Decline in Physical Retail Sales Drive US Digital Advertising to New Heights?

Last year was momentous for everything ‘digital.’ In most sectors, digital solutions solved problems as the COVID-19 pandemic forced sheltering in place.

In our view, a decline in the US retail footprint could turbocharge the next leg of digital ad spending, as shown in the chart below. 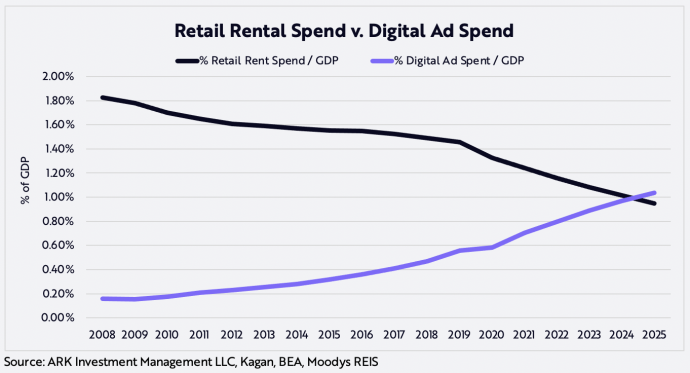 According to online figures and our estimates, US retail vacancy rates jumped 350 basis points last year to 13%, shrinking the retail rental market by $35 billion, from $312 billion to $277 billion, as the pandemic forced a shift to online shopping. As with digital advertising, this trend was in place before 2020, suggesting that it will continue as merchants try to boost online sales.

If this thesis is correct, US digital ad spending could grow 17% at a compound annual rate, from $121 billion last year to $265 billion, during the next five years. As a result, and as shown above, relative to GDP, digital advertising at 1.04% would be higher than retail rent at 0.95% in 2025.

3. What is the Nvidia Ominverse?

This week Nvidia announced more than a dozen new products during its annual GPU Technology Conference (GTC). Among them were the ARM-based server Grace CPU, the Bluefield DPU to accelerate the performance of next-generation data centers, and the Omniverse open platform. Omniverse is Nvidia’s infrastructure- and platform-as-a-service solution enabling photorealistic simulations of the real world and the Metaverse.

Omniverse is a collaboration platform with multiple GPUs for 3D production. Nvidia’s CEO Jensen Huang once described Omniverse as the Google Docs for physics-based simulation. The platform consists of Nucleus servers for live syncing, KIT forOmniverse native applications, Connect for third-party design applications like Unity and Autodesk, and RTX Renderer for ray tracing technology. Since December, the Omniverse platform already has attracted more than 17,000 beta users, boding well for the launch of its enterprise license this summer.

In our view, the Omniverse platform has two distinguishing characteristics. First, it will accelerate automation in the enterprise with “digital twins”, as illustrated by WPP and BMW. In a simulated environment, enterprises can create synthetic data to augment real world data as they train neural nets. Second, the Omniverse platform illustrates Nvidia’s strategic move up the tech stack from chip design to infrastructure-as-a-service or application platform-as-a-service.

This week Dubai’s Crown Prince Hamdan bin Mohammed announced plans to test GM Cruise’s autonomous vehicles in 2023, aiming for 4,000 autonomous cars roaming his country by 2030.  Cruise’s Origin will be Dubai’s exclusive self-driving taxi provider through 2029. Walmart seems to agree that Cruise is onto something big, as this week it participated in its latest $2.75 billion funding at a $30 billion valuation.

Interestingly, Cruise recently acquired Voyage, an autonomous vehicle startup focused on retirement communities. Given the impending integration of Voyage, we believe Cruise probably has more work to do than most observers realize before it launches a commercial full self-driving taxi network.

5. Artificial Intelligence (AI) is Moving to the Edge

We believe that since AI is embedded in many products and services, the cost and latency of running compute tasks on data center servers are more relevant and could become prohibitive. Jem Davies, an ARM fellow, highlighted this point by explaining how a voice-enabled coffee maker could consume up to $15 a year in cloud computing costs. For applications like self-driving in which the decision time is critical, the latency and cost associated with servers hundreds of miles away could become life-threatening.

Given the limitations of data center server processing, enterprises are beginning to push compute workloads to the edge. Apple’s FaceID is a good example. Because the iPhone – not a server – hosts the biometric data and AI that power FaceID, users can activate airplane mode, turn off WIFI, and still use FaceID. This edge computing paradigm reduces latency, minimizes computing costs, and eliminates the liability associated with faulty data.

Edge computing is central to ARM’s recently announced v9 architecture. The new architecture will support Scalable Vector Extensions 2 (SVE2), a mathematical specification that underpins the Fugaku supercomputer. Excitingly, SVE2 support could enable CPUs to perform complex matrix-based calculations that otherwise would offload to GPUs. As a result, we believe more robust machine learning and data processing should happen at the edge, perhaps giving coffee makers the ability to recognize voices without help from servers hundreds of miles away.