#264: We believe the COVID-19 Pandemic Accelerated the Shift Away from Cash by Three Years, & More

1. We believe the COVID-19 Pandemic Accelerated the Shift Away from Cash by Three Years

During the past year, the use of cash at Square’s merchants in the US dropped nearly 10 percentage points as a share of total transactions, from the high 30% range to the high 20% range, a drop three times the average annual decline during the past five years, according to a recent Square report. In other words, the coronavirus crisis seems to have accelerated the shift away from cash by three years.

Since 2015, the Fed’s Diary of Consumer Payment Choice has calculated cash as a share of transactions that has been roughly 10 percentage points below that from Square’s data, as shown below. Explaining this discrepancy, cash has dominated small dollar transactions, a category that historically has characterized the spending at many Square merchants. We believe several trends gained momentum during the coronavirus pandemic, explaining the accelerated shift from cash. Consumers changed their physical payment habits for small dollar transactions from cash to cards and digital wallets, and they started ordering more products online. As a result, the Fed’s Diary of Consumer Payment Choice is likely to show that the use of cash dropped below 20% of all transactions in 2020 for the first time.

We believe that if consumers continue to abandon cash, it should be easier for Square to merge its merchant and consumer ecosystems. In the past, Square has surveyed Cash App users about their willingness to pay for transactions by scanning a Cash App QR code displayed on merchant’s Point-of-Sale (POS) device. Abandoning cash and learning about the utility of QR codes during the coronavirus, more consumers are likely to answer Square’s survey question in the affirmative.

2. The Experience Curve Could Boost Electric Vehicle Margins in the Short-Term

In the 1960s Bruce Henderson, the founder of Boston Consulting Group, suggested that the phrase “experience curve” captured the essence of Wright’s Law. According to Wright’s Law, for every cumulative doubling in the number of units produced, costs decline at a fixed percentage rate.

Henderson postulated that market share was critical to the success of technologically enabled products. Because cost declines are a function cumulative production, market share leaders should enjoy virtuous cycles: as consumers select lower priced products, the more competitive companies scale production leading to a faster cumulative doubling in the number of units produced and a concomitantly lower costs relative to the competition. This dynamic can cause significant margin expansion in the embryonic stage of a new product, as shown in section B below. 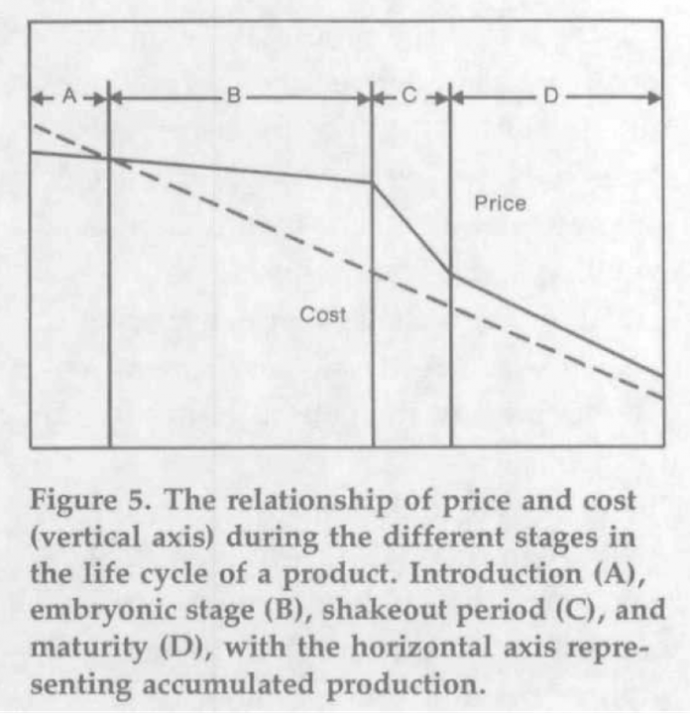 ARK believes that electric vehicles have entered the embryonic stage of the learning curve, though many companies still are in the introductory phase during which costs exceed price. If we are correct, the leaders in the electric vehicle market should enjoy margin expansion during the next few years while the rest of the industry attempts to catch up on the experience curve.

On Wednesday morning, Bloomberg reported that the Chinese government is considering a joint venture with dominant Chinese internet platforms like Alibaba, Tencent, and Bytedance so that it can monitor user data. While not official and not covered by local media, the rumor caused fears of another round of regulatory tightening in the space.

The same morning, the SEC announced that it will roll out the The Holding Foreign Companies Accountable Act, a law signed by Donald Trump in December to crack down on US listed Chinese companies that fail to comply with US auditing standards. According to the Act, the US could delist companies with ties to the Chinese government or those with board members who are Chinese Communist Party officials. Chinese listed ADRs will have three years to comply with the new laws.

These headlines caused what we believe will be short term turmoil in Chinese technology stocks, especially those listed only in the US. In both the US and China, many policy makers have vested interests in the growth of their economies and businesses. Policies might accelerate or hinder the pace of innovation for a time, but we believe self-preservation probably will bring policymakers back to both tables.

4. How Personalized Will Cancer Care Become?

Cancer researchers have deduced that personalized medicine leads to better patient outcomes. At the University of California, after a meta-analysis of 346 Phase I trials, scientists found that biomarkers improved patient response rates by 30% while non-biomarker trials improved response rates by only 4.9%.

Given such strong results, imagine the potential response rates to therapies tailored completely to one individual! Scientists are working on personalized medicines based not only on genetics but also on tumor microenvironments.

At the University of Michigan, scientists found that human melanoma metastases transplanted in mice correlated to human clinical outcomes. While the use of mice as metastatic predictors is not scalable or practical, especially because tumors take months to grow, the results from the trial are likely to encourage a shift toward personalized approaches beyond genetics.

Organoids, for example, replicate organ complexity and can monitor the interaction between and among cells as therapies impact organs. ARK believes that innovation in personalized medicines could deliver much better patient outcomes in the future.