Bitcoin’s total market capitalization, or network value, crossed $1 trillion for the first time on Friday as its price passed $54,000. Despite its run, ARK’s analysis suggests that bitcoin is early on its path to monetization. In our view, bitcoin’s current $1 trillion network value could scale to $6 trillion during the next five years. 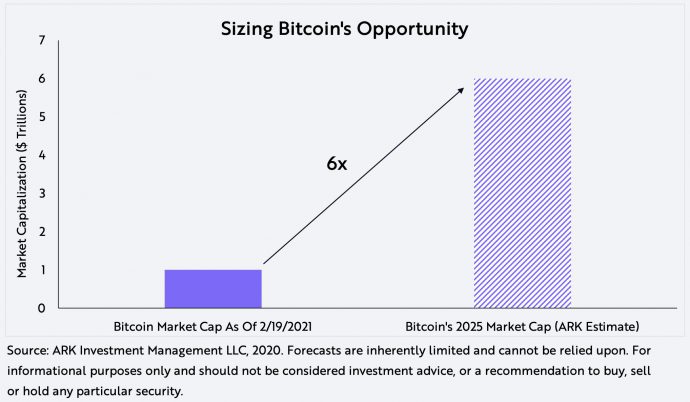 As discussed in the white paper we published last year, we believe bitcoin’s largest market opportunities include:

As the cornerstone of a new asset class, bitcoin seems to have earned an allocation in investment portfolios. As a result, capital allocators should consider the opportunity cost of ignoring it.

During the next decade, ARK believes that multi-cancer earlier detection (MCED) tests will transform oncology. As we have written previously, MCED tests have the potential to shift the stage-at-diagnosis from metastatic toward localized disease. Public and private payers, however, are unlikely to reimburse MCED screening until 2024 or 2025 when companies will have published trial data supporting the clinical utility of such tests.

While MCED screening could save employer costs over the long-term, other monetary and psychological consequences also should be considered. Because cancer is so rare in the baseline population, MCED tests probably would identify an equal number of true-positives and false-positives, forcing employers to pay for unnecessary follow-up diagnostic tests. For patients diagnosed with cancer as a result of MCED screening, employers probably will not be able to distinguish between life-extension imparted by earlier treatment and lead-time bias, making it more challenging to quantify MCED benefits. Moreover, because the employee turnover rate in the US averages five years, employers adopting MCED tests could incur costs for diagnosing and treating cancers that, at less progressive companies, would not occur until later in life.

3. Audi’s CEO Could Be Right for the Wrong Reason

Audi’s CEO Markus Duesmann recently stated that electric vehicles will have less range than that currently offered by Tesla. In our view, Duesmann is trying to justify Audi EVs’ short range today with the suggestion that range is unlikely to impact consumer purchasing decisions in the future. ARK’s research suggests that the EV market will segment and include a new class of short-range neighborhood electric vehicles which Audi could be planning to address.

ARK first modeled EV price parity with gas-powered cars based on a range of 200 miles. We concluded that such an EV would accommodate the travel needs of roughly 80% of the U.S. population, or nearly every commuter with a personally owned vehicle.

Now ARK’s research suggests that a range of 350 miles would be necessary to satisfy most consumers who want to replace their gas-powered cars with EVs. Though real-world driving behavior would suggest otherwise, we believe consumers still seem to be basing their EV purchase decisions on range.

Last week, several companies announced plans involving the convergence of e-commerce and payments. Uniting them were two-sided networks aggregating demand and supply, or consumers and merchants.

For the first time, Shopify announced the expansion of Shop Pay to Shopify merchants on a new platform, Facebook. While it framed the launch as value-add for merchants and denied its ambitions to become a marketplace, in the words of CEO Tobi Luetke a “distorting middle channel,” Shopify likely will use Shop Pay as a customer acquisition tool for its consumer-facing Shop app, ultimately feeding its merchant sales funnel. During its investor day, PayPal presented its vision of a digital wallet with “hundreds and hundreds of million consumers building demand curves… that retailers will be able to address”. During its earnings call, Affirm hinted at building out its consumer brand by expanding “into higher frequency purchases,” establishing closer relationships with consumers and generating demand for its merchants. Finally, a recent Square job post suggests that Cash App is likely to integrate with “larger businesses”, already having aggregated an estimated 35 million consumers.

Venture capitalist Bill Gurley has analyzed two-sided networks, or marketplaces, through an interesting lens. Gurley argues that aggregating demand organically is more difficult than aggregating supply and will differentiate marketplaces from one another. Given his lens and logic, digital wallets like Cash App and Venmo could face much less friction than others in forming two-sided networks, as they already have aggregated tens of millions of monthly active users and have leveraged their scale to integrate with merchants.