ARK’s Expected Value For Exact Sciences In 2027: $140 Per Share Read Now
ARK Invest> Explore ARK’s Newsletter> #257: Despite Bitcoin’s Run to An All Time High, Its “Hype” Seems Contained Relative to That of Ethereum, & More

#257: Despite Bitcoin’s Run to An All Time High, Its “Hype” Seems Contained Relative to That of Ethereum, & More

1. Despite Bitcoin’s Run to An All Time High, Its “Hype” Seems Contained Relative to That of Ethereum 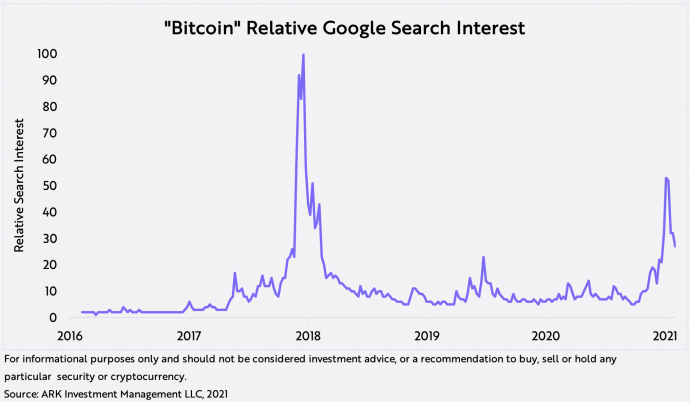 Ether paints a different picture. Google’s relative search interest for Ethereum in this cycle hit a higher high than after its parabolic move in 2017. Since early January, however, it has slipped to ~60% of that peak. Meanwhile, the price of ether has broken out to an all-time high of $1,750 as of this writing. 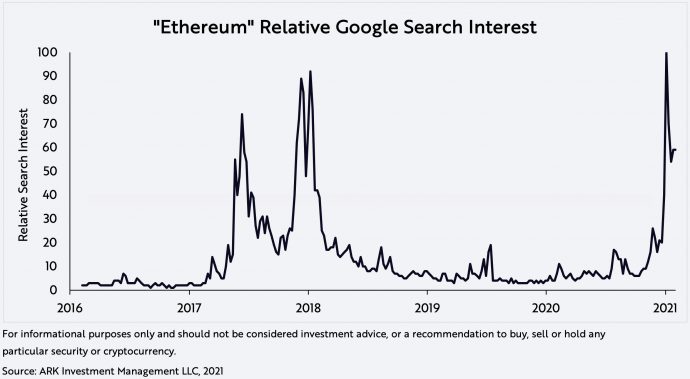 Because investors are more familiar with cryptoassets now compared to 2017, we believe the different search dynamics suggest that institutions could be the incremental force behind bitcoin, while retail investors are focused more on ether. Microstrategy’s conference for institutional investors this week could support the same conclusion.

2. Could Type 1 Diabetes Be Gene Edited Away?

Gene-editing solutions could have a profound impact on the prognosis for diabetes patients. In the United States, diabetes plagues 34 million people not only with the disease itself but also with medical costs and a loss of income totaling roughly $327 billion per year. If effective in controlling insulin sensitivity, CRISPR gene-editing’s total available market could expand dramatically, perhaps exponentially.

3. The Robotaxi Race Is Gaining Momentum in China

This week Baidu announced its 2020 Beijing Autonomous Vehicle Road Test Report, a week after AutoX launched its fully driverless robotaxi in Shenzhen. According to the report, after testing autonomous vehicles in Beijing for the past three years, Baidu has collected 2 million cumulative kilometers of real-world driving data, accounting for 91% of all autonomous test miles in Beijing.

Meanwhile in Guangzhou last month, private autonomous competitor WeRide raised $310 million in Series B funding and launched its Mini Robobus. Founded in 2017, WeRide is a Guangzhou- and California-based autonomous driving technology startup that is leading Guangzhou’s robotaxi pilot program and has completed more than 147,000 trips with ~60,000 passengers as of November 2020.

As China’s robotaxi competition heats up, the top contenders – among them, AutoX, Baidu’s Apollo, Pony.ai and WeRide – are collaborating with local governments and picking their battles on a regional basis. To the extent that China’s autonomous vehicles must partner with municipalities on vehicle-to-everything (V2X) technology, we believe this strategy could be an efficient way to commercialize, creating a number of regional robotaxi monopolies across China.