#254: Could We Eat Our Favorite Fried Foods Without Worrying About Bad Cholesterol, & More

1. Could We Eat Our Favorite Fried Foods Without Worrying About Bad Cholesterol?

This week at the J.P. Morgan Healthcare Conference, Verve Therapeutics, a private gene-editing company, presented interesting pre-clinical data on coronary heart disease (CHD) in non-human primates. In the U.S., CHD is the leading cause of death, one every 36 seconds.

Verve’s scientists discovered that by inactivating the PCSK9 gene they were able to lower the level of low-density lipoprotein (LDL), or bad cholesterol, and therefore the probability of heart attacks in non-human primates that otherwise seemed healthy.

Verve presented data showing that one treatment of in vivo base editing to inactivate the PCSK9 gene in non-human primates was effective, durable, and well-tolerated. It reduced the average PCSK9 protein level in the blood by 89% for six months and did not deliver any off-target effects.

In our opinion, this encouraging data suggests that base editing could cure other point mutations, or “misspellings”, in base pairs of DNA, potentially providing treatments for populations that heretofore have been difficult to treat.

Outside of China, the number of EV companies going public is mounting and, if automotive history is any guide, we believe most will disappear in one way or another. As gas-powered cars commercialized in the early 1900s, for example, roughly 485 companies entered the business. By 1930 fewer than 50 survived and just three accounted for 80% of auto output. Likewise, in China, more than 500 EV companies had registered by 2019 but only a handful were able to raise additional funds last year to produce one vehicle or to scale manufacturing. Now it appears EV startups are proliferating outside of China. Again, if history is any guide, most of them will fail to reach scale.

3. In A Lackluster Year For Sports, Online Betting Took Off

Despite shortened seasons, canceled tournaments, and low viewership of sports programming in 2020, online sports betting thrived in the US. According to reported figures, sports bets placed, or ‘the handle,’ soared by 39% on a year over year basis, from roughly $13 billion in 2019 to $18 billion.

Augmenting fantasy sports and e-sports, legalized online sports betting is giving companies – and the leagues themselves – an opportunity to offer exciting interactive experiences and generate new sources of revenues.  As shown in the chart below, we believe revenues in the three sports betting categories combined could grow 31% at a compound annual rate from $9.5 billion last year to $37 billion in 2025, as we believe the handle for online sports betting could scale 10x from roughly $18 billion to $180 billion. 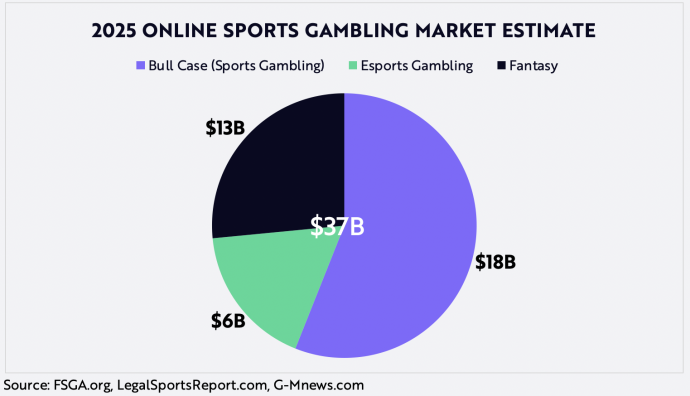 4. Invitae And PacBio Are Partnering To Design An Ultra-High-Throughput DNA Sequencing Platform

During the J.P. Morgan Healthcare Conference last week, Invitae (NVTA), a leading medical genetics company, and Pacific Biosciences “PacBio” (PACB), a provider of long-read sequencing instruments, announced a collaboration to develop an ultra-high-throughput sequencing platform based on PacBio’s HiFi sequencing chemistry. This collaboration could increase the number of threats to companies focused on short-read sequencing.

Bolstered not only by results from this year’s PrecisionFDA Truth Challenge but also by improvements in HiFi accuracy via Google’s (GOOGL) DeepVariant as well as research community feedback, we think PacBio’s HiFi sequencing method provides the most complete and accurate view of the human genome.

To drive widespread adoption, PacBio likely needs to improve instrument throughput and variable cost. Collaborating with Invitae, we imagine PacBio can gain critical insights into its customers’ challenges, from automated sample prep to large-scale data processing. Invitae’s high sample volume could help PacBio’s long-read sequencing to capitalize on its Wright’s Law curve, as costs decline 28% for every cumulative doubling in the number of whole human genomes sequenced on long-read machines.

In our opinion, HiFi sequencing should help Invitae pull further away from its competition in the molecular diagnostics space, enabling the detection and evaluation of hard-to-sequence variants that could change patient management meaningfully. Unlike with short-read sequencing, HiFi-sequenced genomes should allow for the digital reassessment of patients’ DNA throughout their lifetimes, especially as researchers learn more about hard-to-sequence genes and the effects of structural variation within the human genome.

Ultimately, we believe the combination of talent, resources, know-how, and sample volume should allow both companies push long-read sequencing into routine medical practice faster than otherwise would be the case. By publishing data on clinical utility and diagnostic yields across disease types, they also should be able to demonstrate the system-wide value of HiFi sequencing over short-read whole genome sequencing.