1. Has Christmas Come Early with Cures for Beta Thalassemia and Sickle Cell Disease?

This weekend, in collaboration with Vertex Pharmaceuticals (VRTX), CRISPR Therapeutics (CRSP) presented new data on ten patients treated in its gene-editing CTX-001 trial for beta-thalassemia (TDT) and sickle cell disease (SCD). In a positive surprise, the company disclosed that nine more patients have been treated, suggesting that the companies are pleased with its safety profile.

Accompanying the presentation was a publication in the New England Journal of Medicine (NEJM) describing in detail results from the first two patients who received infusions more than a year ago. Reinforced by this NEJM publication, the trial results have increased our conviction that CRISPR Cas9 could cure disease with no off-target edits.

2. What is the End Market for Solid-State Batteries?

This week QuantumScape (QS), a solid-state battery company, released data demonstrating that its single-layer battery cell could charge in 15 minutes, operate in a wide range of temperatures, and achieve more than 800 cycles, roughly equivalent to 240,000 miles in an electric vehicle with a 100kWh battery. Batteries rarely perform this well across all three vectors. Worth noting, however, according to Bloomberg QuantumScape also is using an electrolyte gel, making it more of a hybrid solution than a pure solid-state battery, at least for the time being.

Many labs and battery companies have demonstrated impressive results, but few have commercialized successfully at scale. ARK will continue to track the space closely.

3. Amazon Is Building Its Own AI Training Chip for Release in 2021

While Nvidia is the exclusive provider of AI training chips for Amazon Web Services (AWS) today, we believe the competitive dynamics will change in 2021. During the first half of the year, Israeli company Habana – now owned by Intel – will supply Amazon with training chips. In the second half of 2021, Amazon will deploy its in-house designed Trainium AI chip which AWS CEO Andy Jassy said will drive down the cost of AI training significantly.

This announcement reaffirms our view that Nvidia’s main competition in the long term will come not from other chip makers but from hyperscale cloud companies. Thanks to their unprecedented scale, companies like Amazon and Apple are now making silicon that outperforms merchant silicon at a lower cost. As a result, we believe Intel will lose its Mac business over the next three years. While this dynamic will not be as dire for Nvidia, over time its data center business is at risk to vertical integration at AWS and Google. More promising, because more of the market will remain on premise, Nvidia is likely to gain share thanks to its highly specialized software stack.

New chips should lower AI costs. As delineated in ARK’s upcoming Big Ideas 2021 report, during the past two years cloud AI chip training costs have declined roughly 37% per year. Further reductions will be necessary to democratize AI research and deployment.

Last week, WarnerMedia announced that this year it will release its 17-film motion picture slate on HBO Max the same day the films open in theatres, at no extra cost. According to WarnerMedia’s CEO, Jason Kilar, the decision was to “do something firmly focused on the fans, which is to provide choice.” That said, the move to a hybrid release model caught many in Hollywood off guard and threatens to disrupt, if not destroy, the movie theatre industry.

For decades, status quo has been a box-office-only release followed several weeks or months later by a direct-to-consumer, whether streaming, cable, or DVDs. Why did content providers adhere to this model for so long? The answer is simple: the box office generates more revenue than do direct-to-consumer options. According to our research, a 2-hour film released in theatres monetizes at roughly $4.50 per hour compared to $0.22 per hour on Netflix.

In the years ahead, however, we believe consumers are likely to pay up for early access to movies at home, enhancing the economics of direct-to-streaming significantly. In fact, earlier this year digital sales of NBCUniversal’s Trolls World Tour earned nearly $100 million in just three weeks. While the theater experience – big screens, surround sound, and buttery popcorn – has earned a hefty premium for years, in our view, at-home viewing is convenient, cozy and, with the right setup, just as good if not better than the theatre. Giving consumers “choice”, Warner Media seems to have put the final nail in the movie theater coffin.

5. The Most Interesting Black Friday Weekend Metric Is Not Sales Volume 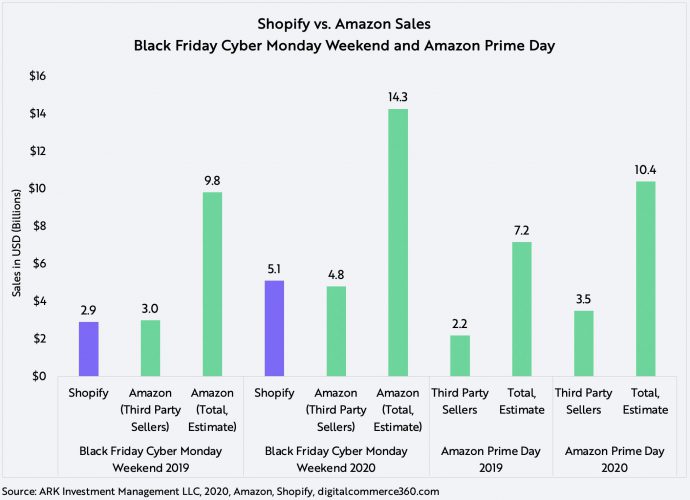 Perhaps more important is another metric. Shopify’s Shop app, a consumer mobile application for shopping and tracking packages, climbed the US App Store download ranks at an accelerated rate during the busiest shopping weeks of the year. On December 1, it broke into the top 10 of downloaded apps across all categories, ranking just behind the Amazon app. On December 1, Shop also ranked first across the App store in the UK and since then has ranked #2 compared to #15 at Amazon. In the Canadian App Store, Shop also has overtaken Amazon this season.

Why are these comparisons important? Unlike Amazon, Shopify is not a marketplace: it is a technology provider that enables businesses to sell products and services online. Consumers view Amazon primarily as a retailer while most Shopify end-customers probably don’t know that Shopify is powering their online shopping. With more than one million merchants on its platform, Shopify will have to “organically aggregate demand”, in Bill Gurley’s words, if it wishes to become a marketplace.

While publicly it announces stunning merchant sales numbers that take the spotlight, our analysis suggests that internally Shopify is putting together the pieces for a powerful marketplace by aggregating consumer demand through Shop App and Shop Pay. Once this two-sided platform is in place, Shopify will be able to charge merchants for sponsored product listings, targeted advertising, and other value-added services. On the consumer side, Shopify is likely to offer financial products beyond Shop Pay in its Shop app, perhaps aiming to become a digital wallet provider.