1. Visa Partners With An Ethereum-Based Stablecoin

Visa has announced that it will integrate its credit cards with the payment capabilities of Ethereum-based U.S. Dollar Coin (USDC). Launched by crypto company Circle in 2018, USDC has enjoyed significant adoption this year. Now valued at roughly $3 billion, USDC provides cryptoasset investors with the liquidity to gain exposure to US dollars outside of traditional financial rails.

The partnership will integrate USDC’s software into select Visa credit card issuer platforms. According to a Forbes article, “Eventually, Visa-supported businesses will be able to send USDC payments internationally to other Visa-supported businesses. The funds will get converted to the national currency and can then be spent anywhere that accepts Visa.”

Visa announced this partnership two months after leaving the Libra Association, which Facebook has renamed the Diem Association. Visa’s decisions to abandon Libra/Diem and join forces with USDC suggest that its reservations centered more on Facebook than on cryptocurrencies.

During the same week that Visa threw its support behind stablecoins, Congress introduced a bill mandating that prospective stablecoin issuers obtain banking charters. While we believe this is unlikely to pass, such a bill would throw a wrench into crypto innovation in the US.

This week, Stripe launched Treasury, an application programming interface (API) that will give Stripe clients the opportunity to offer banking services to their customers. With a few lines of code, for example, Shopify will be able to offer business checking accounts, cross-border payments, and business debit cards to small businesses on its ecommerce platform.

To enable the service, Stripe is partnering with FDIC-insured banks like Goldman Sachs and, in our view, disintermediated them. As they rely on Stripe to scale their distribution, banks could lose control of their relationships with customers like Shopify and Shopify’s customers. By delegating customer-facing services to Stripe and even Stripe’s customers, banks could be ceding trusted relationships and economic claims to Stripe.

We believe banks could face a fate similar to that of media companies when Netflix entered their market. In its early days, TV studios partnered enthusiastically to get digital distribution, not anticipating that Netflix would disintermediate them with its own studios. As it gains scale in financial services, Stripe could route API calls not to bank brands but to banks offering consumers the best economic terms. Without direct to customer relationships, many banks will be in a race to provide API responses, serving customers they will never meet as the industry commoditizes. In our view, Twilio has done the same thing to the telecommunications industry.

Looking to IPO at a $30 billion valuation, Doordash notes in its S-1 that its business model could be at risk if it fails to develop autonomous ground and aerial based delivery systems. ARK agrees.

In partnership with Starship Technologies and through its acquisition of Scotty Labs, Doordash is investing in autonomous technology but might not win the race to build an autonomous drone logistics network. ARK believes that, much like Uber and other ride-hailing companies, Doordash probably will have to partner with a drone logistics provider which will lower its share of delivery economics significantly.

ARK estimates that drones will deliver food orders for only $0.25 per order at scale, boosting food delivery as a percent of food–away–from–home from 2% today to nearly 40% by 2030. Drones are likely to deliver nearly half of those orders. Owning the technology stacks, drone manufacturers like Skydio or Amazon are in good positions to offer the logistics networks and enjoy the lion’s share of drone delivery economics.

4. DeepMind’s AlphaFold Ushers in a New Age of Computational Biology

Proteins are essential to all life on earth. They are composed of hundreds to thousands of linked subunits, called amino acids. Each amino acid is unique in size, shape, and electric charge, causing a protein to twist and contort in 3D space as the chain settles into a comfortable position. The resulting structure determines a protein’s function. Hemoglobin, a protein found in red blood cells, for example, has grooved pockets that bind to oxygen (O2), transporting it throughout our bodies.

Traditionally, scientists have used imaging techniques like x-ray crystallography to determine protein structures. In 1972, chemist Christian Anfinsen proposed that the sequence of a protein’s amino acids determines its 3D structure. Since then, to avoid the high cost of experimentation, researchers have attempted to ‘simulate’ protein structures with brute force calculations that haven’t cut it.

This week DeepMind shocked the world with AlphaFold, an algorithm capable of predicting protein structures on par with contemporary experimental methods. The CASP consortium considers an accuracy score above 90 GDT1 a viable solution. AlphaFold achieved a median score of 92.4 GDT.

In our view, AlphaFold is a profound breakthrough for two reasons. First, the NN-training set did not include proprietary data, only the ~170,000 known protein structures in a free, public database. Second, according to our estimates, DeepMind trained AlphaFold for only $20,000, demonstrating the power of novel NN-architectures combined with deep domain expertise in computational biology.

While AlphaFold seems to promise major breakthroughs in drug discovery, protein engineering, and foundational biology, a limitation could be its accuracy in predicting proteins different from those in the model’s training set. We are looking forward to DeepMind’s discussion of this potential weakness in its forthcoming paper on AlphaFold.

According to our estimates, R&D pipelines in the pharmaceutical/biotech industry – especially early pre-clinical assets – are undervalued. Alphabet’s (GOOG) AlphaFold probably has exacerbated this undervaluation.

Clinical pipelines seem to be undervalued because next generation sequencing (NGS), artificial intelligence (AI), and CRISPR and other gene therapies will boost their efficiency, shorten development timelines, reduce failure rates, and increase returns on investment dramatically.

Based on our research on these technologies, before learning of DeepMind’s breakthrough, biotech companies could harness them to accelerate time-tomarket by 25% and reduce trial failures by 10%. AlphaFold could improve those rates, as 40% of all R&D costs are pre-clinical. Potentially applicable to all proteins and to protein-to-protein interactions, NN-based algorithms could turbocharge human therapies and agricultural breakthroughs.

We believe AlphaFold could increase the net present value of a pre-clinical asset from $57 million to more than $155 million, as shown below. Thanks to AlphaFold, the cost to discover each new protein structure could drop from over $1 million that historically has been the case to pennies. 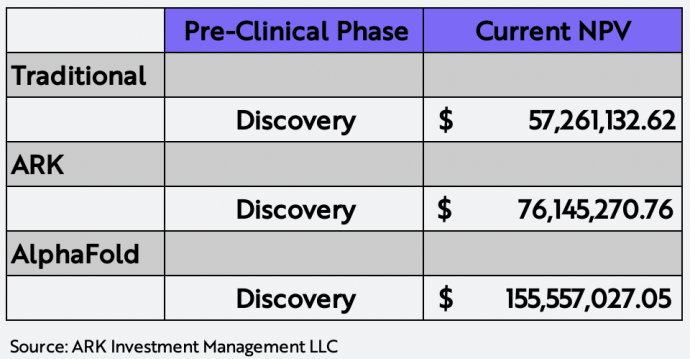