A “Third Place” is a space outside the home and workplace/school where people gather, and communities build. Today, video games are becoming third places. During most of gaming’s history, community activities and development were offline – video games were just video games. Thanks to advancements in technology, however, video games have gone social.

Fortnite is one of the best examples of the shift to social gaming. In 2017, it launched as a first-person battle royale shooter game. Three years later, Fortnite now holds virtual concerts for millions of players and has dedicated a space for users to party, not battle.

Fortnite is not alone. In southeast Asia, Sea recently launched a ‘training ground’ where players can meet and hang out in Garena Free Fire, the most popular battle royale mobile game in the world. A few months after Free Fire’s launch, a quarter of its users are spending time daily in this new space.

Gamers seem to love this new genre and want more choices. Tobi Lutke, the CEO of Shopify and an avid gamer, is a good example, as shown in his tweet below. In our view, gaming is in the early days of a massive shift in user behavior.

If the trend toward more socialized gaming continues, as we believe it will, then according to our research, the combination of increased play time and monetization should propel video game revenues forward at a 16% compound annual rate during the next five years, taking them from $175 billion today to roughly $365 billion in 2025.

As multi-cancer screening tests proliferate, ARK forecasts that many more early-stage cancers will be detected over time. That said, the goal of cancer screening is not to detect disease but to save lives. To improve survival, oncologists will need to prescribe precision therapies for early-stage tumors.

When performing surgery and attempting to cure cancer, surgeons remove as much of an early-stage tumor as possible. MRD focuses on cancer cells unintentionally left in place that could cause a clinical relapse, as illustrated in the y-axis in the chart below. Medical imaging often is not sensitive enough to detect a relapse until the cancer has evolved to an advanced state. MRD monitoring can detect tumor growth months, if not years, before medical imaging. Many MRD tests also can scan for the genetic mutations associated with precision therapies. 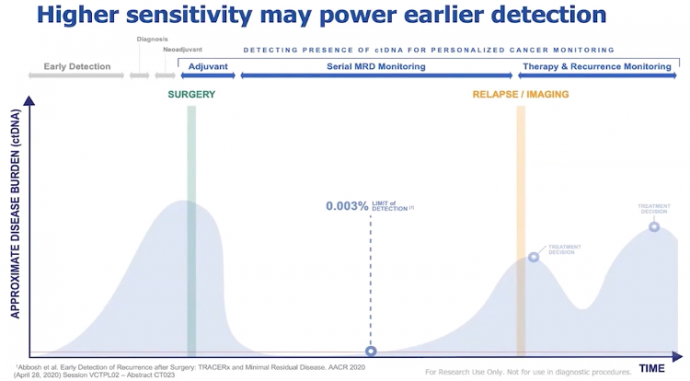 Thanks to the sustained cost declines associated with next-generation DNA sequencing (NGS), artificial intelligence, and synthetic biology, MRD monitoring should become even more cost-effective in 2021.

3. Square and PayPal Move Closer to a Closed-Loop Payments Future

Based on recent earnings reports and product launches, Square and PayPal could threaten the duopoly power of the major card networks sooner than many investors expect. PayPal’s management mentioned digital wallets more times than ever before during its third quarter earnings call. According to CEO Dan Schulman, PayPal wants to create “one of the most compelling and expansive digital wallets in the world” with capabilities far surpassing those of PayPal’s Venmo or Mobile Cash today. Tied into PayPal’s digital wallet ambitions is further penetration of the physical world. PayPal already has QR code partnerships with major retailers including CVS in the US and is in discussions with more than 100 other large retailers. By rolling out QR codes and embedding wallet payments, PayPal could disintermediate third parties, improving its transaction economics. Interestingly, PayPal has not mentioned card networks on any of its earnings calls this year. In our view, PayPal could be using the COVID-19 crisis as ‘cover’ to move away from card networks and offer alternative payment solutions such as QR codes.

Square also is doubling down on QR codes, offering three options for its sellers to enable commerce: first, directly through Square’ POS hardware which can display a QR code; second, with Square Online which enables customers to scan, order, and pay with printed QR codes; and finally, with Square Online Checkout, enabling customers to scan printed QR codes for selected items or general use cases such as donations.

At the same time, Square is rolling out Cash for Business, a service that enables businesses to accept payments through their business accounts on Cash App. We believe most Cash for Business transactions should be funded with Cash App users’ balances, and not linked credit cards, suggesting that transactions between Cash App users and Cash App sellers will be closed loop, disintermediating third party platforms and enabling Square to reduce transaction related costs. Remarkably, Cash for Business now accounts for 9% of Square’s GPV and 20% of Cash App revenues after revenue growth of 320% on a year-over-year basis year during the third quarter.*

4. Xpeng Switches Up Its Autonomous Strategy to Include Lidar

This week Xpeng announced that it would mass produce vehicles with lidar sensors as part of its next generation autonomous driving strategy. While in the past Xpeng has mimicked Tesla’s strategy, giving Tesla reason to accuse it of stealing Autopilot source code, this announcement suggests a deviation from Tesla’s path to full autonomy. Elon Musk believes LiDAR is “a crutch that will drive companies to a local maximum” and prefers radar.

Perhaps Xpeng is pivoting to LiDAR after finding it difficult to mimic Tesla’s path to full autonomy without an autonomous chip and the latest Autopilot rewrite. While Xpeng could be using LiDAR as a redundant sensor for features like autonomous emergency breaking, its description of autonomous suggests that LiDAR is one of its primary perception sensors.

Key to our understanding of Xpeng’s strategy will be the role of HD maps, which are critical to Waymo’s and Cruise’s autonomous driving plans. Xpeng’s press release mentions high precision mapping, as does its S1, without disclosing its role. While LiDAR and HD mapping might accelerate Xpeng’s commercialization strategy, they could impede its ability to scale. ARK will continue to search for more clarity on the details of Xpeng’s autonomous strategy.

Stick with ARK as we follow the latest autonomous developments in China and tweet your insights to @TashaARK!