1. Quibi Is Shutting Down

Just six months after launching, Quibi, the mobile-only subscription-video-on-demand (SVOD) service, is shutting down. What went wrong? According to co-founders Meg Whitman and Jeffrey Katzenberg, Quibi’s failure was “likely for one of two reasons: because the idea itself wasn’t strong enough to justify a standalone streaming service or because of our timing.”

While launching a new mobile–centric streaming service during the middle of a global pandemic was no easy task, Quibi failed because it seems to have been a half-baked uncompetitive service. For $7.99 a month and with no advertising, Quibi launched a tiny catalog of ‘movie-quality shows designed for your phone’. As shown below, Quibi was expensive compared to other SVOD services offering much more programming. 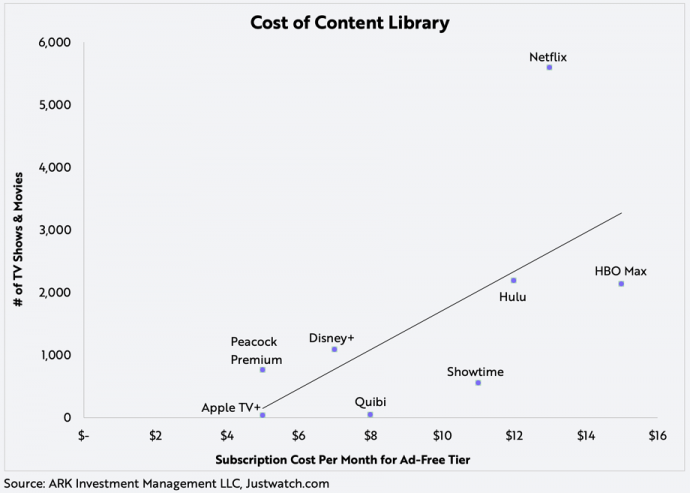 Not only did it fail to stack up to SVOD competitors, but Quibi entered a short-form video market rife with free alternatives like YouTube, TikTok, Instagram, and Snapchat. While poor timing may have accelerated its demise, we believe that Quibi would have failed regardless because it offered little value relative to competitors.

2. Potentially CRISPR Will Delete the Drivers of Tumor Growth

Cancer cells harbor spontaneous – or somatic – genomic mutations that differentiate them from healthy cells. Somatic mutations drive tumor progressions that can become lethal. Many targeted cancer therapies aim to disrupt proteins created by mutated genes, but do not attack the mutated genes themselves.

The CNIO researchers used CRISPR to delete a specific type of somatic mutation—a gene fusion. Simply, gene fusions result when two genes, often from different chromosomes, collide inside a cancer cell. Fusions create highly dangerous proteins, called chimeras, that drive tumor growth. The researchers engineered molecules, specifically guide RNAs, to bind to the left and right of the gene fusion, deleting the fusion. Conceptually, in repairing their own DNA, the cancer cells destroy the source of their growth. Because fusions occur only in tumor cells, CRISPR therapy protects healthy cells from damage.

In our view, editing pathogenic gene fusions with CRISPR could add to the growing repertoire of targeted cancer therapies.

3. Robots Are Entering Construction Sites on the Ground and in the Air

This week Trimble formed a strategic partnership with Softbank’s Boston Dynamics, giving Spot – a robot – access to the construction market. Trimble will equip Spot with sensors to scan and measure in and around construction sites, protecting construction workers from the movement of heavy machinery.

ARK believes that during the next few years many types of robots will infiltrate construction sites, both on the ground and from the air. Komatsu’s drone technology, for example, works alongside its autonomous haul systems, providing images and maps of construction sites.

Drones should be able to collect job site data much more cost effectively than humans, with sensors that are less accurate and lighter than those that Trimble has mounted on Spot. Today, without Trimble equipment, Spot sells for a hefty $75,000, while Komatsu’s drones cost less than $5,000 upfront plus a monthly subscription of $1,800. ARK wonders if a fleet of drones that collects massive, albeit less accurate, data will be able to compete with ground-based robot systems.

4. PayPal Unveiled Plans to Enable the Purchase and Sale of Cryptocurrencies

PayPal and its subsidiary Venmo have announced plans to enable cryptocurrency purchases. Within the next few weeks, users of Paypal’s Cash or Cash Plus will be able to buy, sell, and hold bitcoin, ether, litecoin, and bitcoin cash.

In June, CoinDesk surfaced rumors of PayPal’s crypto plans, suggesting that its 346 million users around the world would be able to buy and sell cryptocurrencies.

Next year, PayPal plans to enable crypto purchases through its network of more than 26 million merchants and through Venmo, its P2P payments app. According to its FAQ, “Once launched in 2021, when a consumer selects cryptocurrency as the funding source, the cryptocurrency will be instantly converted to fiat currency and the transaction will be settled with the PayPal merchants in fiat currency.” PayPal has not disclosed when or if it will enable cryptocurrency withdrawals, a cause for concern for the crypto community.

With 346 million active users around the world, PayPal will be the first network capable of introducing crypto to a mainstream audience.