Without live sports, linear TV would lose one of its most important value propositions. According to a study done by The Trade Desk (TTD), live sports are preventing 60% of cable customers from cutting the cord. To keep their customers engaged, linear TV providers have paid billions of dollars for the rights to broadcast live sports, the most recent deal between Turner Sports and MLB costing $3.2 billion over seven years.

Within the next year, contract negotiations will begin for three of the four major sports leagues in the US. As shown below, the NFL, MLB, and the NHL will be able to cut ties with the major networks in 2021. But, will they? 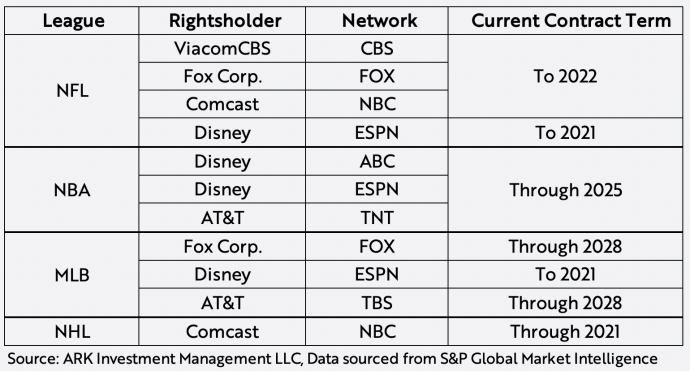 While sports leagues have been experimenting with streaming TV for years, no major team has struck a streaming-first national broadcasting deal. Thanks to their reach to date, linear TV providers have been able to pay more for sports rights than any other content distributors. During the past 40 years, sports leagues have extracted more from them in successive rounds of negotiations, the latest round generating $10.8 billion per year across the major four league sports.1

We believe that since Amazon, Apple, and Google have higher cash hoards and more extensive reach than linear TV providers, they are using streaming services as customer acquisition strategies for their base businesses. Recently, Amazon extended its streaming rights to Fox’s Thursday Night Football, an agreement that included one game a year exclusively for Amazon. While seemingly insignificant, exclusive rights to one game could signal that some sports leagues are open to more extensive streaming deals. If Amazon, Google, and/or Apple gain more sports rights, users will begin to ask why they still pay sky-high prices for live sports when they can watch them elsewhere for free?

If you would like to read more about the disruption of linear TV, check out our recently published Bad Ideas Report.

2. Did Cruise Automation Update Its Autonomous Plans in Response to Waymo’s Announcements?

ARK’s research suggests that the autonomous driving industry will submit to natural geographic monopolies thanks to the amount of location-specific driving data necessary to launch. With high vehicle utilization rates, first movers will be able to collect “big data” and build significant barriers to entry. While Waymo will be the first company to launch a commercial autonomous service, a competing platform could take majority share by scaling at a faster rate. The more real-world driving miles a commercial service collects, the better the autonomous system is likely to perform.

With the largest autonomous-capable fleet in the world, Tesla could have a significant advantage over competitors. GM’s scale and manufacturing capability could provide Cruise with a competitive advantage over Waymo, which outsources production to traditional automakers. The questions are: will GM execute in time, and will it matter?

3. A Leak from SITC Revealed a Win Against Solid Tumors

On Wednesday, a leak from the Society for Immunotherapy of Cancer (SITC) revealed that Iovance Biotherapeutics’ (IOVA) tumor infiltrating lymphocytes (TILs), combined with Merck’s Keytruda, delivered an impressive overall response rate of 44% in patients with metastatic head and neck cancer. Patients on Keytruda alone had an overall response rate of only 16%.

While the sample was small, only 8 patients, and the manufacturing and scaling of this complex therapy could be challenging, in our view the TILs data is extremely encouraging not only for patients with head and neck cancer but also for those with other solid tumors. Indeed, in other early stage trials Iovance’s TILs therapy showed promising efficacy in both melanoma and lung cancers.

Neural net-based compression is intensifying the trend toward AI eating software. For decades, the Motion Picture Experts Group (MPEG) managed the standards for video compression, evolving them from MPEG 1 in 1993 to H.264 today. These handcrafted algorithms forced various hardware, software, and media companies to cooperate and pay hefty royalties. All of the algorithms found common patterns in pixel blocks and saved bandwidth by sending efficient pixel representations.

Neural nets work on principles different from MPEGs. Instead of encoding pixels, neural nets encode semantic level information—eyes, mouth, nose, and their positions. Much like a sketch artist, the decoder “draws” the picture based on the semantic description and its own “imagination”.

Long term, GANs are likely to dominate the transmission of internet video. We would not be surprised to see companies like YouTube and Zoom switch to GANs, enabling them not only to slash bandwidth costs but also to create new features.

5. China Restricts the Ability of Online Travel Agencies to Discriminate on Price

Effective October 1, the Ministry of Culture and Tourism of China issued provisions to curb malpractice in the online travel industry. The provisions will penalize false advertising, the deletion or alteration of reviews, and price discrimination based on big data.

Until recently, the Chinese online travel industry has charged different prices for the same trip – sometimes 20%+ higher – based on purchase frequency, demographic data, and device type, among other variables. As a result, “Slaughtered by Big Data” (“大数据杀熟”) became one of the top 10 viral phrases in 2018. Subsequently, in 2019 the government began drafting the provisions that just took effect.

While the policies are consumer friendly in theory, they may not be easy to enforce. The online travel industry is notoriously opaque, making proof of price discrimination difficult. That said, the policies exemplify China’s willingness to adapt quickly as the economy digitizes at an accelerated pace. It also is sending a message to other digital industries abusing big data and discriminating against customers on price.

6. In China, Mobile Payments Are Boosting Entrepreneurship, Income, and Risk-Taking

Mobile payments have become ubiquitous in China, as discussed in a previous newsletter. With a positive impact on business formations and household incomes, mobile payments also have protected households during income shocks, according to a recent paper from Peking University. As shown in Figure 2 from the paper, between 2011 and 2018 transactions in most Chinese prefectures shifted from fiat currency to mobile payments.

Mobile payment ecosystems also seem to have provided a buffer against negative income shocks. According to the Peking University paper, when incomes dropped 10% during tough times, consumption declined 25% less in Chinese households that had adopted mobile payments compared to those that had not, -4.8% compared to -6.3%, perhaps because mobile payment ecosystems enabled relatives and friends to support one another more quickly and conveniently than otherwise would have been the case.