#242: Digital Wallets Are Adding Users at an Exponential Rate, & More

1. Digital Wallets Are Adding Users at an Exponential Rate

PayPal’s Venmo and Square’s Cash App have amassed roughly 60 million users organically in the last 10 and 7 years, respectively, a milestone that took J.P. Morgan more than 30 years and five acquisitions to reach, as shown below. 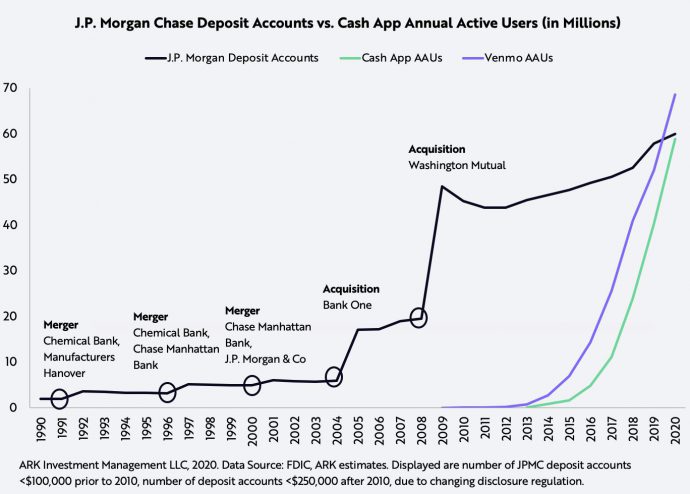 According to ARK’s research, during the next five years the number of US Digital Wallet users will more than double to 227 million, generating a market capitalization of roughly $830 billion if investors value each user at roughly $3650, the average valuation per US bank customer at year-end 2019. In our view, $3,650 is quite a conservative valuation for Digital Wallet users given banks’ poor track records in cross selling their services. On average, US consumers use only 1.8 products per financial institution. Digital Wallets should be able to provide and extract more value per customer as we believe they cross sell more services successfully thanks not only to a more user-friendly experience but also to the convergence of their 24/7 data collection advantage and artificial intelligence. By the end of this year, we expect the number of J.P. Morgan Chase deposit accounts to total approximately 60 million* while Cash App scales to 59 million Annual Active Users (AAUs) and Venmo to 69 million.

For more insights and perspective, we invite you to read our Square valuation blog and battle test our open source model on Github.

According to a new survey from Stratasys subsidiary MakerBot, 74% of respondents plan to invest in 3D printing during the next year. Including 1,200 participants in 20 sectors, the survey results highlight the advantages that respondents believe 3D printing offers, particularly in the wake of the COVID-19 pandemic. Respondents not using 3D printing services today cited cost savings as the most likely reason they will invest. ARK believes that companies most impacted by the coronavirus pandemic will accelerate their adoption of 3D printing not only to reduce costs but also to survive. Aerospace comes first to mind.

Notably, 38-46% of the respondents in Military & Defense, Consumer Goods, and Aerospace are using 3D printing to reduce dependence on external suppliers. As the pandemic subsides, many companies are likely to reorganize their supply chains to prevent further disruptions. Not only will it enable manufacturing to take place closer to the end user but 3D printing also will help reduce complications, creating products with new parts and configurations previously impossible with traditional manufacturing methods.

In other survey results, roughly 40-50% of the respondents in Automotive, Consumer Goods, Military and Defense, and Manufacturing are 3D printing new business lines. To maximize its benefits, 3D printing must be incorporated into the early design and ideation phases of product life cycles, which is rare today and a key reason its adoption has been slower than analysts had expected. Perhaps fallout from the pandemic, particularly the need to lower costs, will force companies to use 3D printing not only for prototyping, which accounts for the vast majority of its use cases now, but also for better and more cost-effective results throughout the production process.

ARK estimates that 3D printing could grow from a $10-15 billion industry to more than $100 billion in the next 5 years. In hindsight, the pandemic could demarcate its inflection point.

3. Will an Intelligent Transportation System Accelerate the Commercialization of Autonomous Vehicles in China?

In a document titled “Strategy for Innovation and Development of Intelligent Vehicles”, China outlined its blueprint for autonomous mobility. Authored by 11 ministries and released in February, the plan revolves around a completely intelligent transportation system that supports connected roads and vehicle-to-everything (V2X) capabilities.

Two months later in April, with its “Apollo Intelligent Transportation Whitepaper”, Baidu Apollo released a full-stack, open source solution to intelligent transportation. Baidu Apollo claims that its solution will yield returns 6-13x higher than traditional spending on infrastructure and that, thanks to some early deployments, select cities are enjoying a 30% drop in peak traffic. Since April, Baidu has won 10+ municipal contracts to implement its intelligent transportation solution, the largest of which was a RMB450 million, or $60-65 million, in the Huangpu District of Guangzhou.

While Western critics question the feasibility and economic benefits of large-scale intelligent transportation systems, ARK believes that China’s command and control system – 11 ministries and bureaucracies notwithstanding – has a better shot at success than most other countries. That said, we wonder if smart transportation infrastructure will make enough of a technological difference to commercialize autonomous travel in China faster than anywhere else in the world.

Researchers estimate that roughly 70% of rare diseases are genetic, most of which have been difficult to diagnose. Without genomic analysis, children with rare diseases and their families typically enter arduous and expensive diagnostic odysseys that can take years.

As of September 2018, 1,200 children had been sequenced using rWGS at Rady Children’s, 34% (n=408) of whom received diagnoses and 70% (n=286) of those diagnosed received immediate, life-changing adjustments in medical care. Following the pilot, Blue Shield of California decided to cover Rady’s rWGS service at $5,000—an industry first.

While the breakthroughs are remarkable to date, ARK believes that long-read DNA sequencing could advance the diagnoses of rare and other diseases at warp speed. A 2019 study argued that short-read sequencing data diagnoses rare diseases at <50% rate, even when aided by advanced analytics. In our view, the main reason is that short-read systems cannot sequence adequately larger mutations that cause many genetic disorders, such as copy number variants (CNVs).

Recently, Pacific Biosciences (PACB) and Leiden University, a hospital in the Netherlands using MOON for rare disease diagnoses, launched a summit series called SMRT Leiden centered around the clinical utility of long reads. Invitae seems likely to combine MOON with PacBio’s long read HiFi chemistry to establish a best-in-class rare disease diagnostic pipeline for critically ill children. In our view, given its vertical integration of genetic counseling and clinical workflow management and its franchise in pediatric medicine, Invitae is well positioned to launch such a service, while PacBio’s eagerness to focus on cost declines and pursue clinical applications could turbocharge its adoption. Given their prevalence and the potential of a $5,000 reimbursement, our analysis suggests the market for diagnosing pediatric diseases could be as large as $7.5 billion in the United States alone.