In our latest whitepaper, we argued that SaaS is on the threshold of another golden age. Lo and behold, this week five software companies filed S-1s, signaling their intent to go public:

Luring these companies into the public markets are valuations not seen since the tech and telecom bubble in the late nineties. While all five appear to be growing revenues at impressive rates, not one is close to positive cash flow territory, as shown below. 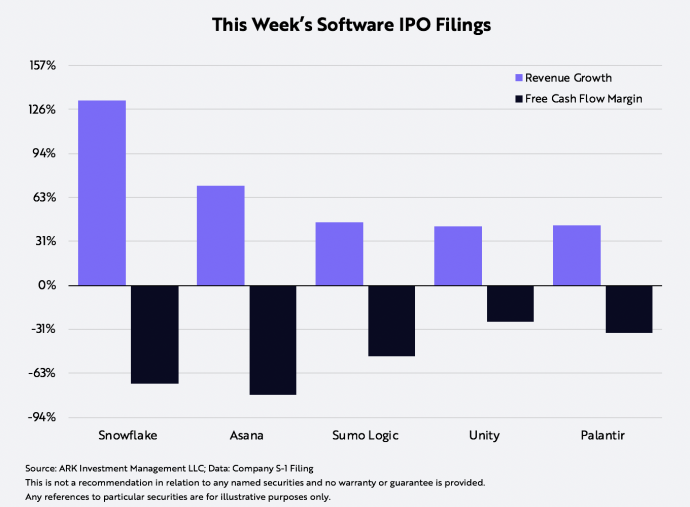 That said, SaaS economics involves significant spending upfront to capture and capitalize on the lifetime value of a customer. According to our research, SaaS represents an $800 billion opportunity during the next five to ten years, giving these companies plenty of runway to grow.

In an upcoming white paper exploring its maturity as an institutional asset, we delved into bitcoin’s volume and liquidity. Recently, depending upon the number of venues aggregated, bitcoin’s trading volume per day has ranged from $200 million to $12.4 billion, as shown below. 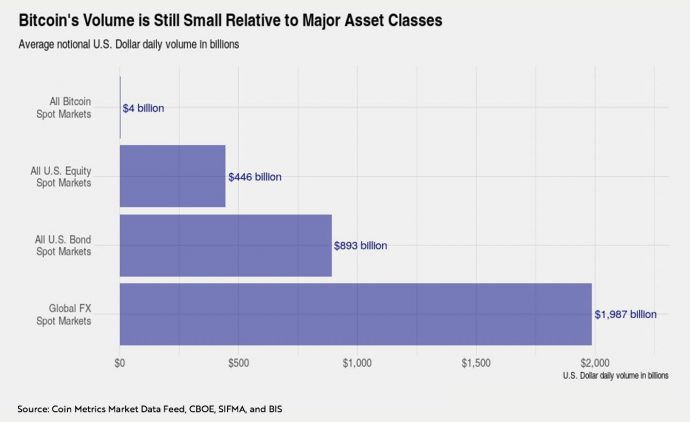 For a US buy-side institution purchasing bitcoin for the first time, the USD market is perhaps the most relevant but it is relatively illiquid compared to other trading venues. Given $200 million in daily trading activity, a buy-side institution limited to 10% of the volume could deploy roughly $20 million per day in the USD market. Including the major fiat currencies, however, bitcoin’s daily trading volume triples to $600 million, the U.S. dollar accounting for roughly half of the total. Stablecoins more than triple bitcoin’s daily trading volume once again to $1.9 billion, thanks primarily to Tether. Other stablecoins with more regulatory oversight – like USD Coin, Paxos Standard, and TrueUSD – trade little on a daily basis. Accounting for nearly 80% of the total, derivatives expand bitcoin’s daily volume more than five-fold to $12.4 billion, giving institutions limited to 10% of the volume an opportunity to deploy $1.2 billion per day.

At only $2.6 billion per day, bitcoin’s spot market volume is comparable to that of a large cap stock, as shown below. That said, since 2012 it has been growing exponentially, 215% at an annual rate. If it were to continue compounding at that rate, bitcoin’s daily volume would exceed that of the US equity market in fewer than 4 years, and that of the US bond market in fewer than 5 years. 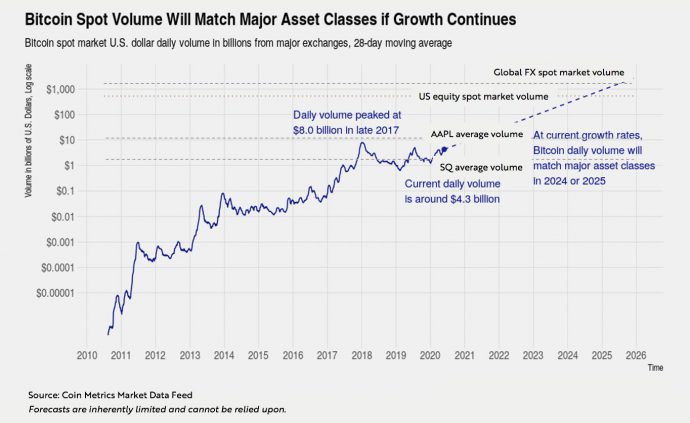 3. Can Walmart Boost Social Commerce in the US?

Reportedly, Walmart, the world’s largest retailer, is working with Microsoft to co-bid for TikTok. If successful, Microsoft and Walmart would own TikTok’s US operation with 100 million users.

What does the world’s largest retailer want with TikTok? Walmart seemingly is aiming to be TikTok’s exclusive e-commerce and payments provider. ARK believes that TikTok could become a highly profitable revenue stream for Walmart.

While associated with fun short-form videos, TikTok also allows users to live-stream which, according to ARK’s research, is the most promising format for “social commerce” today. A medium to sell goods online, video has been a powerful tool over many years. Think QVC and Home Shopping Network. Live streaming takes video one important step further: hosted by popular online influencers, they become part product review, part sales pitch. In China, a more mature e-commerce market, live streaming is ubiquitous, selling goods across platforms like Alibaba, JD.com, Pinduoduo, and Douyin (The TikTok of China).

We believe Walmart could usher social commerce into the US and recapture share at a rapid rate as it overtakes the live-streaming advertising model. According to our research, and as shown in the below chart, US social commerce sales could scale 20-fold during the next five years, from $45 billion last year to roughly $900 billion in 2025. 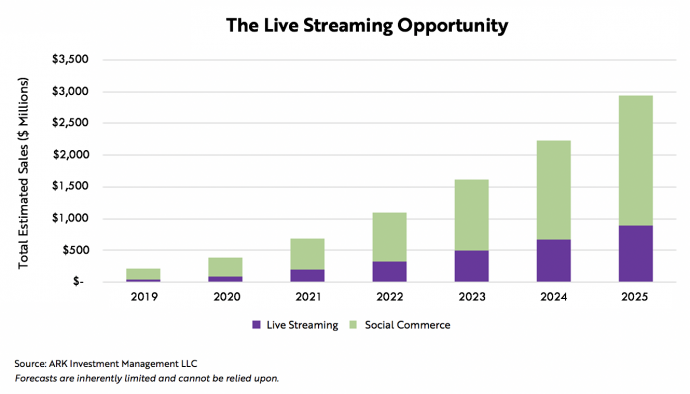 Elon Musk tweeted that 400 watt-hour per kilogram (Wh/kg) batteries with a high number of cycle lives could reach production scale in three to four years. For context, the cells used in the Tesla Model S have an energy density of roughly 250 Wh/kg. Interesting to note, Musk has stated that electric flight becomes interesting at 400 Wh/kg.

Improvements in energy density – more energy per unit of raw material – enable battery cost declines and unlock performance that varies by use case. A reduction in weight and friction might add a dozen miles to the range of an EV, for example, but roads provide most of its support. Roads offer no support for planes in flight, so battery breakthroughs enabling electric flight could be game changing.

Musk’s tweet prompted a range of reactions, some declaring 400 Wh/kg batteries impossible and others speculating about secret battery breakthroughs. In our view, neither outcome seems likely. Instead, and as shown below, 400 Wh/kg in three to four years would be consistent with the pace of improvements in battery energy density during the past 30 years. 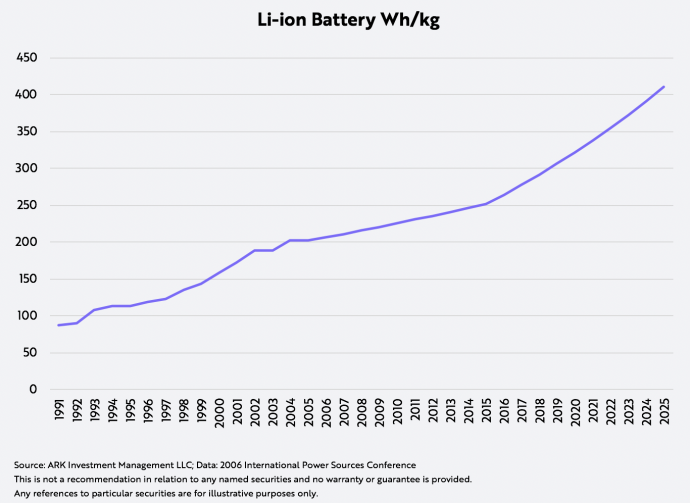 Desktop Metal, a 3D printing startup, is going public through a reverse merger with Trine Acquisition Corporation, a special purpose acquisition company (SPAC). Early deal terms suggest that it will be valued at $1.8 billion, roughly 90 times this year’s sales. For comparison, currently the public markets are valuing ExOne (XONE), a 3D printing company providing similar technology, at roughly $156 million, or 3 times analysts’ estimates for 2020 sales.1 ARK wonders if the flurry of initial public offerings (IPOs) will shrink the gap between public and private valuations.

6. Ant Group: What’s Behind Potentially the Largest IPO Ever?

This week Ant Group, parent company of the Alipay digital wallet, filed for a concurrent listing on Shanghai’s STAR Market and the Hong Kong Stock Exchange. With more than 700 million monthly active users (MAUs),1 Alipay is the second largest financial services platform in the world, trailing only WeChat Pay’s 800 million. Alipay has evolved from a digital payment solution for Alibaba’s e-commerce platform into a full-fledged digital wallet, offering not only access to financial services such as payments, credit, investments, and insurance but also a wide range of commercial services, as shown in the chart below. 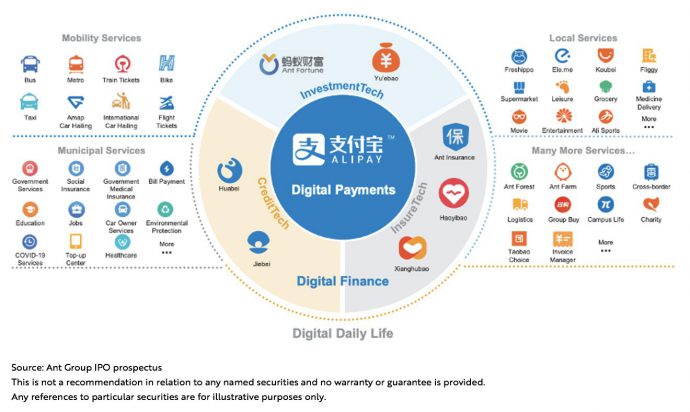 Alipay not only acts as a marketplace for financial services but also provides partner financial institutions with extensive insight into its customers as well as risk management tools, enabling them to customize products for Alipay users. As a result, according to Ant, Alipay shifts most of the risk associated with its financial products – like 98% of the debt originated by Alipay CreditTech – to partner banks.1

Alipay grew its payment volume 60% in the two years ended 2019, from $10 trillion to more than $16 trillion,1 topping China’s GDP by 12%. Understanding that they will evolve differently in each region of the world, we believe that Alipay is the role model for digital wallets, setting a high bar for their value creation elsewhere in the world.

7. Polygenic Risk Scores Could Be Ready for Prime Time

Most tests for hereditary disease assess monogenic risk, analyzing a limited number of genes for mutations, or variants, that disrupt important biological processes. Typically, clinicians trust these tests because of the clear relationship between variants and diseases and, concomitantly, the course for patient management.

In contrast, polygenic risk scores (PRS) surface thousands of common variants scattered throughout the genome. While weak individually, a cumulative score of the small, genetic ‘nudges’ can be a powerful tool to assess an individual’s predisposition to disease.

Despite their potential, clinicians have not embraced PRS. Unlike PRS, monogenic risk tests have enjoyed widespread clinical acceptance, thanks to an established body of evidence and standardized variant interpretations. In contrast, PRS have weaker predictive capability, particularly for people of non-European ancestry, patient types not included in earlier PRS studies.

That PRS can modify and improve the estimated risk of hereditary disease suggests strongly that thorough genetic tests will not commoditize. We believe that diagnostic providers who do not push the boundaries of test design, machine learning, and functional genomics will face severe disruption.