#230: Tesla Continues to Gain Market Share in China and Around the World, & More

1. Tesla Continues to Gain Market Share in China and Around the World

During the first half of 2020, Tesla’s market share of battery electric vehicles in China reached 21%, up from 6% for the year in 2019 and 2% in 2018. It appears that concerns about Tesla’s ability to sell lower-end cars in China have been misplaced.

On a global basis during the first half of the year through May, Tesla’s market share increased roughly 300 basis points from 23% on average in 2019 to 26%. While many investors used to ask what will happen to Tesla when traditional automakers start making and selling electric vehicles, ARK now wonders how high Tesla’s market share will go, a remarkable turn given that our base case assumption is in the opposite direction, 19%, for 2024

2. Liquid Biopsies Designed to Detect Early Stage Cancer Could Save Thousands of Lives

Cancer is a progressive disease. Virtually all solid tumors begin as benign lesions that progress at an arbitrary rate, culminating in metastatic disease. While metastatic cancers comprise the minority of new diagnoses, they account for the majority of deaths over five years.

We believe that liquid biopsies designed to detect early stage cancer, such as those offered by GRAIL and Thrive Earlier Detection, could improve the cancer mortality rate dramatically. Conceptually, liquid biopsies improve mortality by shifting diagnoses from metastatic to local or regional, increasing the odds of survival substantially. With liquid biopsies, if local, regional, and metastatic cases were to comprise 70%, 25%, and 5% of new diagnoses, respectively, then according to our estimates, cancer screening individuals with no other screening alternative – like patients with pancreatic cancer – could result in 31,000 fewer cancer deaths per year in the US alone, as shown on the left in the chart below. In other words, liquid biopsies could save an equivalent of the number of lives lost each year to automobile accidents. From another perspective, screening individuals aged 40+ years could save as many as 85,000 lives per year, more than the number of lives lost to diabetes each year, as shown in the right on the chart below.

ARK plans to release its model for cancer screening and a comprehensive white paper in the near future. 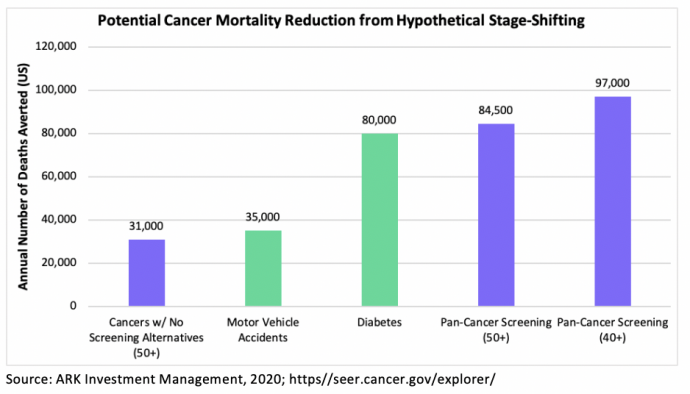 3. Cellectis’ Allogenic CAR-T Cell Therapy is Put on Hold by the FDA

This week, in response to a patient’s death, the FDA put Cellectis’ (CLLS) allogeneic – or donor-derived – CAR-T cell therapy for late stage multiple myeloma (MM) on hold. In our view, the cardiac arrest was not related to the cell therapy for a few reasons. First, having failed multiple lines of therapy, patients in Phase I clinical trials often are extremely sick, the reason they agree to participate in trials which have not been tested for safety and efficacy in humans. The patient who died had undergone several therapies, including autologous CAR-T cell therapy, without success. Moreover, the adverse event happened on day 25, three days before the clinical end point would have been met, at which time Cellectis would not have had to report any adverse events. Finally, the patient was the first to be treated at the higher of two doses. Cellectis disclosed they were planning to expand enrollment at the lower dose, 1 million cells/kg before the patient death. In our view, this clinical hold is unlikely to impact Cellectis’ or Allogene’s other CAR-T programs, the latter’s licensed from Cellectis.

4. The US Upfront Market for Television Advertising Is Plummeting This Year

Historically, the “upfront market” for television advertising has accounted for 25-30% of the annual $70 billion in US TV ad budgets. The upfront market typically takes place in the late spring/early summer when the major TV networks showcase their fall programming and woo advertisers to buy ad slots ahead of the season.

Because of the coronavirus crisis, the upfront TV advertising market has hit a wall. Given the uncertainty surrounding the future of live sports and fall programming, advertisers have slashed budgets for linear TV. EMarketer, for example, expects the upfront market to collapse by roughly 27% this year.

After years of increasing in the face of declining viewership, ad spending on linear TV could be descending into years of secular decline. The coronavirus might have tripped the switch, but streaming TV could seal the deal.

While EMarketer expects a rebound next year, we do not. With plenty of new streaming options, accelerated cord cutting, and programming uncertainty, advertisers are likely to gravitate, if not flee, to more efficient platforms. ARK believes that, from a peak of $70 billion in 2019, the linear TV ad market could collapse by more than 50% to $34 billion during the next five years.

5. Slack May Have Found Its North Star Despite Losing to Microsoft’s Teams

Though first to market with a business chat program, Slack has been crushed by Microsoft’s Teams app. Teams has more than 75 million daily active users (DAUs) compared to Slack’s 12 million. Using its old play book of copying and bundling, Microsoft seems to have vanquished yet another startup.

Not so fast. While Microsoft has been integrating Teams with Office 365 and adding features like video conferencing, Slack has been building Connect for the last four years. Connect takes the Slack model of shared channels a step further, allowing up to 20 organizations to collaborate inside the same Slack channel, closing the communication gaps between and among large teams just in time for a world working remotely at home.

Contrasting the difference between Microsoft’s and Slack’s strategies, Ben Thompson of Stratechery wrote: “…while Microsoft is busy building an operating system in the cloud, Slack has decided to build the enterprise social network. Or, to put it in visual terms, Microsoft is a vertical company, and Slack has gone fully horizontal.”

We believe no company has succeeded in building a truly social network for businesses. Perhaps the closest is Bloomberg in the finance industry. If Slack were to replicate its success across industries and organizations – a big if – it could become the most impactful social network since Facebook.