#226: Nikola Plans to Enter the Market at an Uncompetitive Price Point, & More

1. Nikola Plans to Enter the Market at an Uncompetitive Price Point

Founded to develop hydrogen fuel cell class 8 trucks, Nikola Motor Corporation made headlines this past week as its stock debuted via reverse merger and hit a $30 billion market cap, even though it has not produced one truck. Nikola aims to lower the cost of trucking. ARK’s research suggests, however, that hydrogen trucks will have a higher total cost of ownership than their battery-electric alternatives, as shown below. 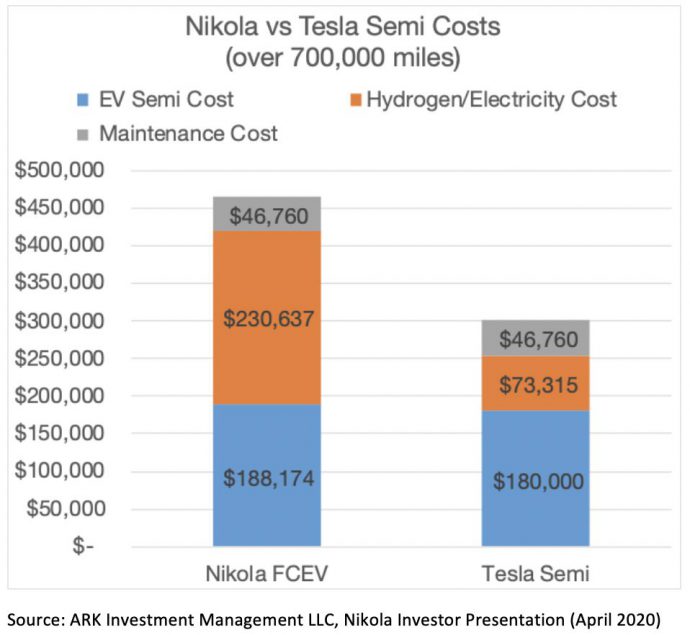 While hydrogen costs and hydrogen drivetrain inefficiencies are key to the difference between hydrogen fuel and electric truck costs, perhaps the more important competitive obstacle will be the infrastructure for hydrogen refueling which is an order of magnitude more expensive than charging stations for battery electric vehicles. Assuming incorrectly that most trucks max out on weight before running out of trailer space, advocates for hydrogen fuel cell trucks often claim that the weight of the batteries will limit the freight an electric truck can transport.

ARK will be surprised if Nikola ever delivers a single fuel cell truck.

2. Snapchat Is Not A Messaging App – It’s A Platform

Is Snapchat just a messaging app popular with Gen-Z? One look at recent product launches would suggest not.

On Thursday, Snap held its annual Partner Summit and provided details on new features and functionality. ARK is most excited about ‘Snap Minis‘, third-party programs that run in Snapchat. Essentially, Snap has created its own app store.

Snap Minis are similar to WeChat Mini-Programs. A multi-purpose app with over a billion monthly active users, China’s WeChat mini-programs has met with amazing success since launching in 2017. Today, roughly 70% of WeChat’s users interact with one or more mini-programs monthly.

ARK believes that Snap could enjoy similar success and evolve into a platform company.

According to the survey, roughly 60% of institutional investors had a neutral to positive bias toward cryptoassets, with 36% already invested. Skewing the results, however, were crypto-focused funds. Institutional skeptics of cryptoassets most often cited concerns about price volatility, market manipulation, and valuation metrics.

Fidelity’s survey results suggest that institutional interest in cryptoassets has gained some momentum during the past year, perhaps encouraged by an increase not only in the number of service providers for institutional custody, trading, and derivatives but also in the trading of regulated derivatives.

Having completed its transformation from a non-profit research organization to a commercial entity, OpenAI released its first product: an API (Application Programming Interface) to access its GPT-3 model. GPT-3 enables a variety of tasks such as translation, question-answering, and writing. Companies like Reddit and Quizlet are participating in the private beta test.

Based on Google’s Transformer technology, GPT-3 is the largest language model ever trained. At an estimated cost of $12 million, it includes more than 175 billion parameters trained on 500 billion data tokens.

Prior to GPT-3, various language tasks required different language models and training data. Thanks to its size and extensive training, GPT-3 is a single model with a range of language skills, attaining a level of generalization previously thought impossible.

From a business model perspective, APIs for AI might not be much of a revenue generator. According to The Information, for example, AWS’s SageMaker revenue was just $11 million in 2018.

5. Could Fears of Overdiagnosis Be an Obstacle to Early Cancer Detection Using Liquid Biopsies?

Since the introduction of cancer screening, insurers and physicians have been concerned about overdiagnosis bias. Conceptually, cancer screening considers many slow growing – indolent – tumors to be lethal, even though they are unlikely to be fatal. As a result, cancer screening’s ability to improve survival could be overrated and, in a vicious cycle, the treatment of indolent tumors could damage the unit economics of cancer screening.

Because ARK believes that liquid biopsies will transform cancer screening, we have researched the impact of overdiagnosis not only on the unit economics but also on patient health. In our current model, we assume that liquid biopsies will detect the same number of indolent as lethal cancers, and that 90% of patients with indolent tumors will undergo medical imaging and 50%, surgeries. As a result, overtreatment risks suggest that diagnostic test providers will have to lower prices or grapple with lower reimbursements, reducing the overall market opportunity.

That said, as the cost of liquid biopsies drops toward and below $1,000 per test, the market opportunity should scale significantly with or without overdiagnosis. The economics of liquid biopsies for cancer screening are likely to be compelling once test providers gather evidence on early detection and survival benefits net of overdiagnosis costs. Moreover, as genomic sequencing and machine learning accelerate our understanding of tumor biology, helping to differentiate indolent from aggressive cancers, overdiagnosis bias should diminish.

Stay tuned as we continue to evolve our thinking on overdiagnosis from the patient’s perspective.

6. Online Services Could Quadruple the Notarization Market in the US

According to the National Notary Association, most states cap fees on notarizations, limiting their average to $5.21. Given the roughly1.25 billion notarizations per year, we believe the market for this service is roughly ~$6.5 billion per year in the US today.

Created to deter fraud, notarizations still assure that transaction-related documents are authentic, though less efficiently than once was the case. As transactions have shifted online, notarizations have not kept pace: while required for many large transactions, most still are offline and in person.

DocuSign and Notarize.com are enabling notaries to move online, especially now that states are providing incentivizes to do so. Colorado, Delaware and Virginia, for example, allow higher fees for online than in-person notarizations. We believe that if other states follow, the notarization market could more than quadruple to $30 billion per year.