During the Ebola pandemic in 2014, Sierra Leone introduced digital payments and saved more than 2,000 lives and $10.7 million in costs with the help of the United Nations (UN). Now that Brazil’s coronavirus death toll has surpassed Italy’s and the WHO expects 190,000 coronavirus deaths in Africa, once again digital payments could be imperative in preventing the spread of the virus in developing countries.

Several African central banks are promoting cashless payments to “reduce the risk of transmission of coronavirus”. Besides reducing its transmission, digital payments should be able to help organize the fight against the virus, as in Sierra Leone in 2014.

Given its underdeveloped medical system, Sierra Leone recruited workers to swab corpses for Ebola but struggled with paying and retaining them until the UN intervened. Before introducing digital payments, remuneration was complex and irregular. Facing crowds and chaos, staff had to travel to payment centers only to find that authorities could not verify their identities. At one point, Sierra Leone’s National Emergency Response Center spent more than 70 percent of its time trying to resolve these payment issues, leaving workers no alternative but to go on strike.

In response, the UN introduced mobile wallets. Workers received secure payments and could cash them at any of 5,000 agents across the country. According to the UN, the introduction of digital payments helped save 2,095 lives and $10.7 million in costs by reducing mistakes and fraud, removing the costs of physical cash transfer and cutting travel costs for response workers.1

1 To put this cost saving in perspective, US$10.7 million is equivalent to the annual cost of funding Sierra Leone’s Free Health Care Program that caters for 1.4 million children under 5 years and 250,000 pregnant women, providing check-ups, ongoing treatment, medications, and surgery.

2. Tesla Appears to Offer the Least Expensive Residential Storage Products on the Market

Based on our research, Tesla’s residential battery storage solution is the least expensive option available on a cost per kilowatt hour basis, as shown in the chart below. One explanation is Tesla’s ability to divert the excess capacity in its vehicle battery cells to those in its stationary energy storage products, matching battery production with demand. 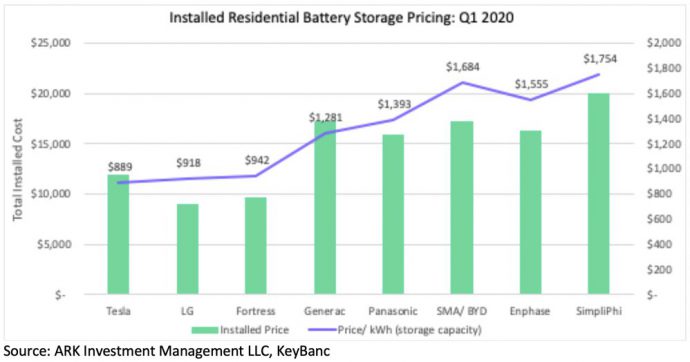 Powerwall features such as Storm Watch automatically charge batteries in advance of severe weather conditions, increasing stored and available energy during power outages. Because its hardware and software are vertically integrated, Tesla added Storm Watch to Powerwall 2s retroactively with a software update and offered its customers a number of strategic benefits. We look forward to learning more about Powerwall’s features and pricing during Tesla’s Battery Day in the next few weeks.

Audi’s new CEO is launching project “Artemis,” a unit designed to cut through bureaucracy and leverage all of VW Group’s resources to build a competitive EV by 2024. To date, VW has spent billions of dollars not only on EV projects but also a modular platform for EVs, but its flagship vehicle, the ID3, has been plagued with software issues. That Audi is not adopting VW’s EV platform is damning, particularly because its first attempt at an EV, the Audi e-tron, seems to have faded away.

Our major takeaway is that no company gets an EV right the first time around, bringing to mind the Tesla/Apple analogy. After the launch of the Apple iPhone in 2007, competitors needed two to three product cycles to catch up.

A smartphone product cycle, however, is much faster than that for cars. If they remain on a four-year development cycle, traditional auto manufacturers are unlikely to be competitive with Tesla until 2024 or 2028. As ARK’s internet analyst, James Wang, notes, the only reason competitors caught up to Apple so quickly was Google’s decision to develop the Android OS. We believe the auto space enjoys no such innovator.

4. The Tesla Ride-Hailing Network Could Be A Boon for Tesla and A Bust for Uber And Lyft

In past newsletters ARK has argued that Tesla should launch a ride-hailing network with human drivers as the COVID-19 crisis subsides. Among the reasons that ride-hailing is an attractive opportunity for Tesla are the following:

(1)   Tesla could put unemployed gig workers back to work.

(2)   Tesla’s electric vehicles appear more cost-effective per mile than gas powered vehicles. ARK estimates that a Model 3 is 30% less expensive to operate than a Toyota Camry, offering the opportunity for higher take home pay for drivers, higher than average take rates for Tesla, or both.

(3)   Uber’s and Lyft’s pricing structures suggest that the Model 3 could charge premium prices.

(5)   With trade-in values superior to those for gas-powered vehicles, Tesla could offer drivers an attractive longer-term investment opportunity.

(6)   With capacity utilization in the 40-50%+ range compared to 4-5% for a personal vehicle, ride-hailing vehicles will provide Tesla with much more data to train its Autopilot system and launch its autonomous taxi network.

(7)   Tesla could offer ride-hailing drivers the opportunity to own autonomous vehicles, if not fleets, on its network.

(8)   Ride-hailing could offer Tesla a profit margin opportunity superior to that for electric vehicles.

ARK estimates that if Tesla were to launch a human-driven ride-hailing network, charging $3-4 per mile with a 20-30% take rate, then during the next four to five years its network could collect an additional 40 billion miles to train Autopilot and could generate an additional $12 billion per year in earnings before interest and taxes (EBIT), taking our bear case price target from roughly $1,500 to $2,700 in 2024. In other words, during the next few years ride-hailing could enable Tesla to add a recurring revenue stream not dependent on solving for full autonomy.

5. Regeneron and Intellia Expand Their Collaboration at an Interesting Time

The expanded collaboration between Regeneron and Intellia focuses on Hemophilia, a genetic blood clotting disorder and a crowded therapeutic market focused on just 20,000 patients in the United States, suggesting that Regeneron believes that Intellia has a competitive advantage. Currently, Hemophilia patients undergo three prophylactic infusions per week, not all of which are successful in preventing bleeding. Both BioMarin Pharmaceutical (BMRN) and UniQure (QURE) are in Phase 3 gene therapy trials for Hemophilia A and B, respectively. While finding trial candidates could be challenging, Intellia and Regeneron could have increased confidence that CRISPR-Cas9 will cure Hemophilia A.

6. RISC-V Could Be the Future of Computing Hardware

RISC-V could be the fastest growing computer chip standard in history. In just five years since the creation of the RISC-V foundation, more than 500 members have signed up, including the Who’s Who of the semiconductor industry, ranging from Huawei to Nvidia, as shown below.

RISC-V’s primary appeal is its open source ecosystem. Just as Linux made UNIX technology free and ubiquitous, RISC-V aims to do the same for computer hardware. Already, companies have built CPUs using RISC-V technology and open-sourced them to the community. Every Nvidia GPU today ships with a tiny RISC-V microcontroller onboard. Western Digital is moving all of its products to RISC-V processors. Being open and free has made RISC-V the most obvious choice among low-end and power-efficient applications.

While it may not disrupt ARM or Intel overnight, “free” RISC-V could become the most disruptive force in chip design. RISC-V should debut in IoT and embedded applications this year and move upmarket to phones and servers during the next five years.

7. Is Bitcoin Coming to Ethereum?

While comparing the amount of bitcoin locked on an Ethereum-powered tokenized bitcoin protocol (e.g. WBTC) to that locked on a Bitcoin-powered bitcoin payment protocol (e.g. Lightning Network) is not apples-to-apples, the growth of bitcoin on Ethereum suggests strong demand for more advanced features not available on the Bitcoin network. A tokenized bitcoin allows users to denominate their holdings in bitcoin when interacting with the Ethereum network. Instead of using ether, Ethereum’s native currency, to make a loan or earn interest, holders can interact with Ethereum’s “DeFi” protocols using a bitcoin-denominated token.

Currently, the most popular Ethereum-powered bitcoin token is WBTC, which functions like Tether, a collateralized stablecoin. Instead of being backed by USD in a bank account, WBTC is backed by bitcoin in a vault.

The traction of tokenized bitcoin on Ethereum should benefit both ether and bitcoin. Certain Ethereum-powered tokenized protocols like tBTC require participants to overcollateralize bitcoin in ether reserves, increasing the demand for ether. Similarly, a bitcoin bridge to the Ethereum ecosystem should add features and functionality not available on the Bitcoin network, adding to the demand for bitcoin.

ARK will continue to monitor these interesting dynamics between Bitcoin and Ethereum. The explosive growth of tokenized bitcoin on Ethereum suggests interesting synergies.

8. Let’s Not Forget About Ad-Supported Streaming

As linear TV struggles to sustain users and ad dollars, Roku is disrupting its stronghold. On Tuesday, Roku announced the addition of more than 100 new live ad-supported channels to its network.

Legacy players aren’t going out without a fight. This year alone, Comcast, Fox, and Viacom have acquired three players in the ad-supported streaming space: Xumo, Tubi, and Pluto TV respectively. That said, what can they do to protect their core linear TV business? Not much.

In our view, as cord-cutting accelerates, the $70 billion US linear TV ad market could be cut nearly in half to roughly $37 billion during the next four to five years. In all likelihood, the ad dollars will shift to free ad-supported channels, with Roku – the operating system with 30% of the smart TV ad load – gaining significant share.