1. Can Quibi Recover from Its Rocky Start?

Quibi, the mobile-only subscription-video-on-demand (SVOD) service, is mobile-only no longer. After one week on the market, Quibi is throwing out its playbook and offering its service on TVs after marketing itself as the first platform with “movie-quality shows designed for your phone.” With more than half the world on lockdown, Quibi is blaming the coronavirus for its lackluster mobile-only start. We believe there are other factors in play.

As we wrote last week, Quibi – with advertising – appears too expensive at $4.99 a month to compete in the short-form video space that has plenty of free alternatives like YouTube, TikTok, Instagram, and Snapchat. At the content level, it also is butting heads with giants like Apple, Amazon, Disney, and Netflix. Is Quibi prepared to outbid them for content?

We believe that instead of recognizing the errors in its strategy, Quibi seems to be blaming the current macro environment. Quibi is repackaging old-world media and competing against lean and mean technology companies. In our view, Quiby may have been set up to fail from day one.

2. Auto Loan Delinquencies Are Putting the Auto Industry at Risk

Based on the success of ridehailing networks and the shift from gas-powered to electric vehicles, ARK believes that the risks to auto loans and the asset-backed securities supporting them are not well understood and could cascade through the global auto ecosystem. As shown below, the percent of auto loans delinquent by 90 days or more has been rising for almost four years and is approaching levels last seen during the Global Financial Crisis (GFC) in 2008 and 2009. During the GFC, most people prioritized servicing their auto loans over their mortgages because, in the absence of ride-hailing, they relied importantly on cars to keep their jobs.

During the coronavirus crisis, the situation has flipped. Forced to work from home, breadwinners are prioritizing the servicing of their mortgages, especially now that ridesharing offers an alternative to car ownership. As a result, the percentage of delinquent auto loans could double or more, approaching levels similar to mortgage loans or even credit cards during the GFC.

Moreover, investors probably have overestimated the value of the underlying collateral supporting auto loans. While the stock of used vehicles predominantly is gas-powered and human-driven now, the shift to electric and then autonomous vehicles is likely to destroy the residual value of used vehicles.

Who is at risk? Service accounts for a third of auto dealerships’ gross profit will be in harm’s way because the cost of maintaining electric vehicles is a fraction that of gas-powered vehicles, particularly those with over-the-air software updates. Financing and insurance accounts for another third of dealers’ gross profits, both of which should be disrupted in the shift from gas-powered to electric vehicles. Traditional auto manufacturers also have significant exposure to auto loans on their balance sheets and have been incentivizing sales with cheaper financing. If auto loan delinquencies and defaults continue to rise, dealerships could go bankrupt and auto makers could lose both their distribution networks and their ability to generate sales with cheap financing.

While ARK previously concluded that autonomous cars could provide transportation at a cost lower than the fuel necessary for walking, further research suggests that they should be able to undercut short-haul flight costs as well, as shown below. To avoid airports and airplanes in the future, consumers probably will choose to kick back and watch Netflix or sleep in autonomous taxi backseats. Flights covering 700 or fewer miles, especially routes like 230 miles from Los Angeles to Las Vegas, are particularly at risk. 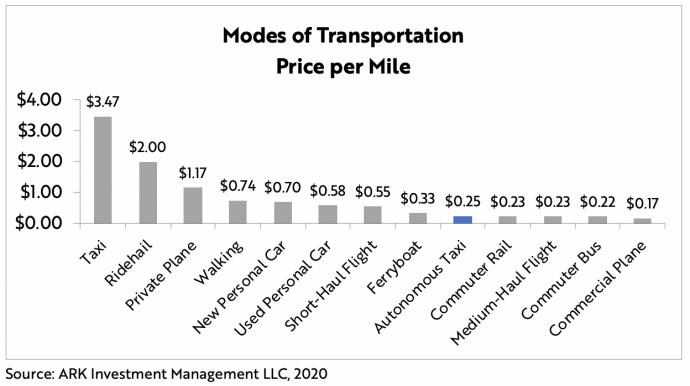 Note also in the graph above that the cost per mile of short haul flights today is equivalent to that of used cars. As social distancing and travel restrictions subside, consumers are likely to opt increasingly for travel by car as opposed to cramped planes with passengers potentially infected by viruses and bacteria. At less than half the cost per mile, autonomous taxis should accelerate that migration.

The government bailout might be a short-term fix, but the longer-term outlook does not seem promising, as the airline industry is likely to lose share to autonomous taxi networks from its most profitable routes.

ARK recently discussed GRAIL’s progress in using liquid biopsies to detect cancer earlier. We now want to focus on the uniqueness of its approach.

What is DNA methylation? Unlike mutations that cause spelling changes in DNA, methylation is akin to boldfacing or italicizing certain letters of the genome. Methylation changes how the body interprets and acts on the DNA’s instructions. Based on an unbiased search of the whole genome, GRAIL has discovered more than 100,000 methylation sites that are feeding its machine learning classifier.

Finally, we note that, in collaboration with the Geisinger Health System, Thrive Earlier Detection plans to publish results on its liquid biopsy in the near future. We’re excited to see how both approaches will advance the earlier detection of cancer.

5. The COVID-19 Crisis Has Not Stopped Fintech Start-Ups from Raising Capital

As consumption has shifted online during this crisis, venture capital has been funding fintech start-ups fairly aggressively. “Years of offline-to-online migration are being compressed into several weeks,” according to Stripe, a private payment facilitator that raised $600 million this week, extending the September 2019 Series G capital raise that valued it at $35 billion.

Likewise, stock trading start-up Robinhood apparently is raising $250 million at an $8 billion valuation, taking advantage of the tripling in its revenues to $60 million in March on a year over year basis despite several hours-long outages. That said, its new valuation is not much above the $7.6 billion at which Robinhood raised $300 million last year.

Trade Republic, a German neo-broker, raised EUR 62 million from Accel, Founders Fund, and others earlier this week. Aiming to become a “one-stop shop” for financial management, much like Robinhood, Trade Republic soon will be introducing savings accounts.

While the COVID-19 crisis is putting some bricks-and-mortar financial companies at the mercy of bailout funds, fintech start-up funding is likely to hit a 10-year high in 2020. Moreover, the value of fintech exits in the first three months of this year already has exceeded that of the entire year of 2019.

Apple’s A-series of chips for the iPhone and iPad are among the fastest in the world, rivaling the performance of desktop PCs. As a result, Apple is looking to put the same kind of processor inside the Mac, replacing Intel’s x86 CPUs, reducing costs, improving battery life, and most importantly, giving Apple full control over its hardware-software stack.

With only 7% share of PC sales, Apple may not seem like much of a threat to Intel, but MacBooks are hugely popular with developers. Almost a third of professional developers use Macs, suggesting that Apple’s switch to ARM could attract a disproportionate number of software developers.

While seemingly a small change to the PC ecosystem, Apple’s decision could have a much more profound impact on cloud computing. Not many developers are designing desktop applications on MacBooks, but they are working on cloud apps like Salesforce, Instagram, and Spotify. Developers prefer that cloud servers run on the same hardware as their laptops, most of which are on Windows today. If laptops were to switch to ARM, servers probably would follow, putting Intel’s monopoly in the $90 billion server market at serious risk.

The shift away from Intel already is underway. For five generations, Amazon’s AWS powered its popular M-series compute instances with Intel CPUs. Last year, however, AWS introduced the M6, powered by its own chip, the Graviton 2 ARM CPU.

For years, developers have been forced to jump through hoops, developing on their x86 laptops and deploying on ARM servers. If and when Apple releases an ARM laptop, the hoops will disappear, and Intel could lose share in one of its most profitable lines at an accelerated rate.