1. The NBA Is Beginning to Move Online

Five hours after the NBA suspended the 2019-2020 season, the Phoenix Suns informed its fans that the games would go on, virtually. The Suns plan to simulate the rest of its schedule on NBA2k, a popular video game, streaming it on Twitch. The team played its first virtual game last Sunday to a crowd of more than 11,000, not far below its average home-game attendance of roughly 15,000.

Given its initial success, other leagues are planning to replicate the Suns’ online model. On Friday, Formula 1 racing announced virtual races until the U.S. is out of harm’s way.

Staying relevant, even if virtual, is essential as sports leagues suspend operations. When not in season, teams lose fans’ attention. Google search results illustrate the risk to teams as they go dark. Based on Google search results, Fortnite – one of the most popular online video games today – enjoys more success in states without an NBA team than in those with a team. Competing for the attention of traditional sports fans, eSports are likely to scale significantly during the next few months.

2. The COVID-19 Pandemic Could Accelerate the Adoption of Fintech

Globally, businesses and governments are promoting cashless payments to combat COVID-19. According to Peter White, microbiology professor at the University of New South Wales, cash notes have the potential to be “super spreaders”, as COVID-19 lives longer on objects than on human hands because enzymes in human sweat break down the virus more quickly.  As a result, governments in India, Ghana, Kenya, Australia, Israel and the UAE are waiving fees for mobile payments and banning cash for public transport, among other measures.

Credit and debit cards do not seem to be a solution to the problem. In a LendEDU study last year, Mike Brown showed that cards harbor even more germs than New York City Penn Station bathrooms. Because mobile phones change hands less often than credit or debit cards, mobile probably is the safest means of payment.

Having pivoted as agile industry disruptors for years, innovative companies already are helping users navigate the challenges of the COVID-19 crisis and serving as backstops until the US government distributes stimulus payments of $1,000-2,000 to adults. In days, for example, Square enabled its merchants to offer curbside pickup and announced that it will add a local delivery feature. In addition, it gave away $100,000 to Cash App users in the largest Cash App Friday ever and is offering discounts of 10% on grocery purchases at stores like Walmart through its Boost instant discount program.

3. COVID-19 Could Accelerate Consolidation in the Auto Industry

This week many automakers, including GM, Ford, Fiat Chrysler, and later Tesla, began shutting down production in response to COVID-19. The United Auto Workers pressured traditional automakers to protect union members and close facilities, while California lawmakers convinced Tesla to pause production at its Freemont facility.

ARK has predicted that automakers will face a wave of consolidation during the next decade as electric vehicles and autonomous technology take hold. COVID-19 could accelerate that trend as consumers put vehicle purchase decisions on hold, forcing automakers to focus on cost cutting measures including, perhaps, research and development that may not pay off for another 5 or 10 years. On Friday, for example, Ford announced that it is eliminating its dividend for the first time  since the financial crisis.

Additionally, now that coronavirus precautions are forcing consumers to stay at home, perhaps fearing for their jobs, they are likely to cut back on spending, potentially prioritizing Netflix bills over auto loan payments. Automakers with loan-heavy balance sheets could be left holding the bag.

4. Analysis Suggests that Short-Term Holders Were Responsible for Bitcoin’s Sell-Off

After bitcoin’s historic sell off last week, cryptoasset data provider Coinmetrics released a report concluding that most of the sellers were new to the asset class. Using on-chain data Coinmetrics illustrated in the report that buyers new to bitcoin (BTC) were linked to the shocking 50% drop in its price in the last few weeks.

The movement of 280,000 BTC previously untouched for 30 days marks the fourth largest spike in bitcoin’s price history. That said, the negative spike was lower than the positive spike last year as BTC seemed to be heading back to $20,000, a sign perhaps that longer term sentiment is more positive than negative.

As posited in ARK Disrupt Issue 213, a large contributor to the selloff seemed to be bitcoin liquidations to satisfy margin calls on derivative exchanges allowing up to 100 times leverage. Bitmex, the largest crypto derivatives exchange, saw more than $700 million in liquidations of its bitcoin perpetual swap. During the selloff, the amount of BTC held on Bitmex soared to an all-time high, suggesting that highly leveraged longs were doubling down, before margin calls squeezed them out.

5. R&D Should Be Considered an Asset, Not an Expense, Particularly in the Genomics Industry

Within the MolDx space, ARK considers research and development (R&D) not just an operating expense but also an asset. R&D dollars can result in novel products, patents on intellectual property, and reductions in cost-of-goods-sold (COGS), generating future cash flows.

The chart below illustrates how aggressively various MolDx providers are funding R&D (x-axis) and the net value of R&D dollars spent during the past three years (y-axis), both of which should convert into future cash inflows. The companies cluster among subdomains in the MolDx space, among them tissue profiling, liquid biopsy, big data cancer genomics, and germline testing. ARK will continue to model how different MolDx providers are enhancing their business prospects with R&D. 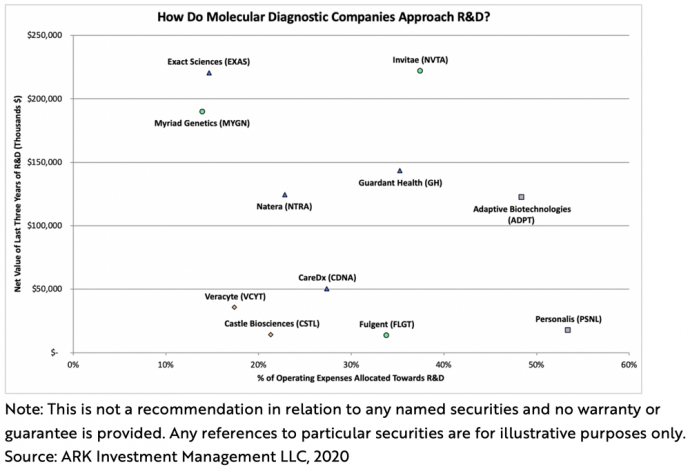