1. Netflix Makes Movies to Attract Users and TV Shows to Keep Them

Netflix’s reliance on third-party content providers has been a constant source of concern for investors. Recently, that concern has intensified as several of its partners, importantly Disney and Comcast, have launched competing services and are pulling content from the Netflix platform.

Anticipating such moves for years, Netflix has been reshaping its content library to minimize its reliance on third-party programming and to attract users based more on their interests. In 2013, Netflix released House of Cards, its first original series, and since then it has created a vast library of original content. According to our estimates, roughly 25% of all Netflix content in the US today is original programming.  In 2019 alone, it produced more than one original piece of content on average per day – 371 new TV shows and movies. 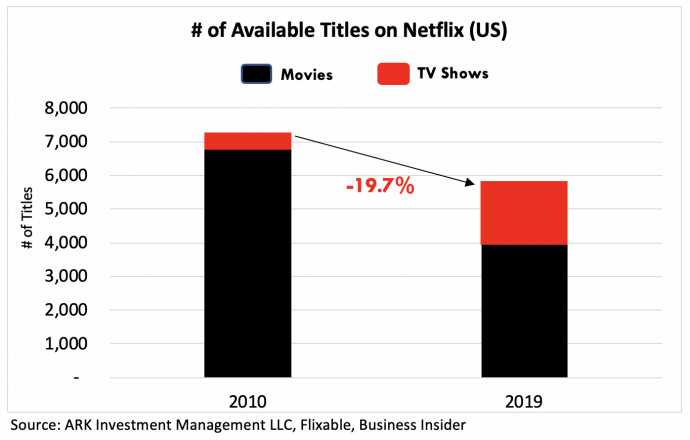 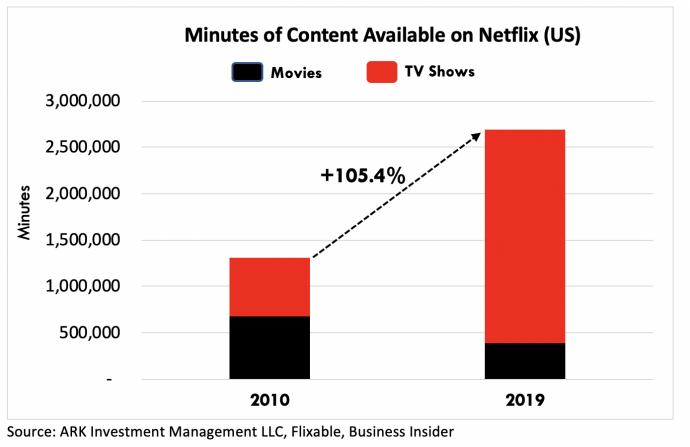 To remain competitive in the ‘steaming wars,’ Netflix probably will continue to replace more third-party content with original programming. Netflix has been preparing for these wars for years.

2. How Can Rising Software Prices Be Deflationary?

Apparently, the headline of 62% inflation is misleading. The most widely cited measure of inflation, the Consumer Price Index (CPI), uses a basket of goods weighted by their relative share of household consumption. In other words, it weights the price of wheat more heavily than the price of safety pins. By contrast, Capiche weights 100 software-as-a-service (SaaS) products equally. Nice-to-have software like Slack has the same weight as essential products like Microsoft Office. As a result, the average weight skews heavily toward niche software applications.

In reality, software prices are falling on average. Unlike household staples like wheat, software improves constantly. Adobe Photoshop or Dropbox, for example, are much more capable today than in 2010. Likewise, a dollar buys more computing power, storage, and functionality than it did a decade ago. Moreover, thanks to the ‘free tiers’ of Google Docs and Slack, software is even more deflationary.

Given software’s invisible contribution to GDP at ever lower prices, inflation in the US could be much lower than the government has reported, and real growth much stronger, camouflaging what could be evolving into “a deflationary boom”.

3. Illumina’s Super-Resolution Technology Could Enable the $100 Genome Sooner Than Expected

During this week’s J.P. Morgan Healthcare Conference, Illumina (ILMN) unveiled several sequencing platforms. Two of them, the NextSeq 1000 and 2000, featured a breakthrough in high-resolution optics that ARK believes could bring the $100 genome to reality sooner than expected.

Most sequencers read DNA based on images from microscopic flashes of light, each color corresponding to one of four DNA bases. Until now, optics have not been able to distinguish between and among flashes clustered tightly together, causing lower quality data and more expensive sequencing. This week, Illumina announced that the NextSeq 1000 and 2000 use super-resolution optics which overcome these challenges.

ARK believes that during the next two years Illumina will upgrade its flagship NovaSeq system with super-resolution optics, taking another leap toward the $100 genome and enabling myriad clinical applications once considered impossible.

As was the case last year, financial advisors reported that cryptoassets have earned an allocation in client portfolios because of their low correlation to traditional asset classes.  The percent of advisors highlighting low correlations increased from 42% last year to 52%.

When asked about client concerns, advisors cited the lack of regulatory clarity first and foremost. The percent of advisors citing regulatory uncertainty as the primary deterrent to gaining exposure to cryptoassets increased from 30% last year to 56%.

5. Visa’s Acquisition of Plaid Could Move the Needle in Fintech

On Monday, Visa announced it will acquire Plaid for $5.3 billion. Plaid allows users to link their bank accounts to apps like Cash App, Venmo, Robinhood, and Coinbase. In contrast, Visa users have to enter their account and routing numbers to confirm debits and credits, often taking days before verification. Plaid removes this friction, potentially enabling fintech companies to grow at faster rates than otherwise would be the case. Serving as a proxy for its utility, the number of bank accounts linked to Plaid has increased dramatically, as shown below. 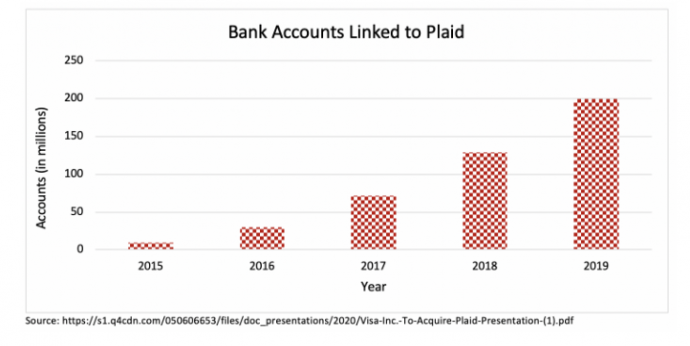 Over the last few years, several banks in the US have criticized Plaid’s data collection which is based on bank account credentials instead of secure APIs. Lurking behind this strained relationship is the question of who owns the bank account data, bank account holders or the banks. Given Plaid’s tumultuous relationship with banks, we found it interesting that both Gordon Smith, Co-President of JPMorgan Chase, and Dan Schulman, President and CEO of Paypal, were quoted as supportive of the acquisition in Visa’s press release.  Perhaps Visa, JP Morgan Chase, and Paypal have come to terms on a more secure way to access and use Plaid’s data.

While expensive, the Plaid acquisition gives Visa several strategic advantages. Offering a less expensive method to transmit funds by way of ACH, it should have greater pricing power when negotiating with Square on Cash App, with Paypal on Venmo, and with Robinhood. From another angle, Plaid will give Visa another way to gain share against US checking accounts. Checks transmitted roughly $26 trillion in 2018, far outpacing the $7 trillion transmitted by debit and credit cards.