1. Is Gaming Approaching an Inflection Point?

According to Matthew Ball’s recent essay, 7 Reasons Why Video Gaming Will Take Over, the gaming industry could be seriously underestimated and undervalued. Over the past decade, gaming has evolved into an entertainment juggernaut that is beginning to usurp other media. Like television, it is leveraging upon a diverse set of distribution platforms, among them PCs, consoles, mobile phones, and subscription services.

That said, growth in gaming is likely to be powered by its unique characteristics, like content that never ends and can morph into an infinite number of storylines. Instead of causing the cannibalization seen in TV and music, new technologies have added revenue streams to the gaming industry, and should continue to do so.

As Ball explains, “The gaming industry today is the closest analogue to the Golden (1938-56) and Silver (1956-1970) Ages of Comics that created the characters, worlds, and storylines that now dominate the box office.” Moreover, unlike books and TV shows with last pages and final episodes, gameplay never ends. Online multiplayer games allow users to play out an infinite number of scenarios.

According to our research, the gaming market will grow at an annual rate of roughly 8% during the next five years, from roughly $149 billion in 2019, including China, to $216 billion in 2024.  Cloud-based gaming platforms like Google’s Stadia could add yet another dimension to the market.

2. Molecular Diagnostics Are Increasing the Efficiency of Clinical Trials

Innovative approaches to trial design have gained share in recent years, as shown below. Stay tuned for the publication of ARK’s upcoming Big Ideas 2020, featuring new research on the efficiency of biotech R&D spending which could recover from a 20-year decline, potentially dramatically. 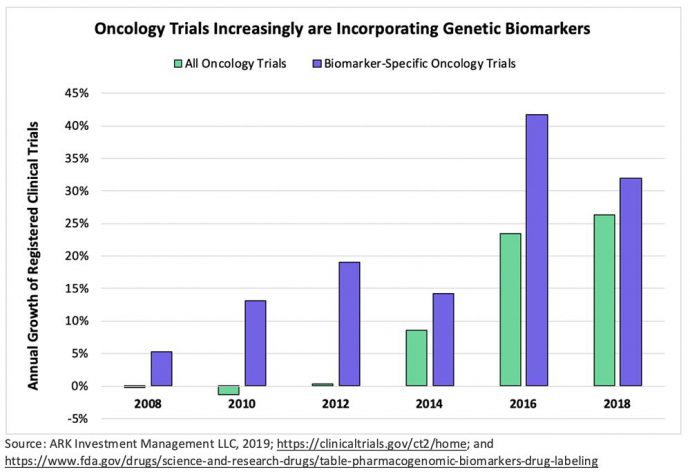 After WeWork’s pre-IPO debacle last year, Softbank began to curb the willy-nilly growth of many of its portfolio companies. As shown in the chart below, they have laid off thousands of employees in recent months.

According to the Founder of car leasing startup Getaround, SoftBank is a “thoughtful partner” but has its own challenges which could cause “ripple effects across their whole portfolio”. Getaround recently let go of roughly a quarter of its workforce. Other startups also have announced a newfound focus on profitability. In the words of Bird’s CEO, “The challenge is to try to stay disciplined”.

Despite $500 billion in dry powder, venture capital seems to be pulling back on new investments. For the first time in at least 15 years, US venture capital investments declined on a quarter to quarter basis throughout 2019. SoftBank’s Vision Fund is no exception as they are reneging on term sheets that already had been promised to startups.

As a result, with a combined value of nearly $2 trillion, today’s private unicorns could suffer from more valuation down rounds. At the same time, startup CFOs probably will have to budget more stringently, cutting back on B2B SaaS and other products with low sunk costs. Most companies, for example, run on Microsoft Office which includes Teams, its messenger software. In tough times, why would they add another service like Slack?

4. Segway’s New S-Pods Might Not Look So Silly in Ten Years

At CES, Segway showed off the S-Pod, a chair similar to the vehicles in the movie Wall-E. The S-Pod is a self-balancing chair that can travel up to 24 miles per hour.

While S-pods might look strange today, ARK believes that many form factors will surface once autonomous technology proliferates. Operating only on city and suburban streets, pod-like autonomous vehicles could offer micro mobility solutions much safer than bikes and scooters. S-pods might not be the winning design choice but do offer a glimpse into the shapes associated with reimagined personal transport.

According to ARK’s research, autonomous taxis could price profitably at $0.25 per mile when deployed at scale. If this scenario is to be realized, the ten-year net present value of cash flows from autonomous taxi platforms could approach $2 trillion in 2020. Micro mobility autonomous solutions also could undercut autonomous taxi prices, increasing consumer access and adding to the mobility investment opportunity.

5. The Rate of Automation Is Accelerating

Automation is proliferating at a record rate. Robot density per 10,000 employees in the manufacturing and auto industries, for example, increased to 200 and 1,200, respectively, over 30 years. In contrast, robot density at Amazon reached 3,000, more than twice that of the auto industry, in only seven years, as shown below.

Important to note, higher automation does not translate necessarily into higher robot density and fewer jobs. Instead, it can add new services that expand addressable markets and create new jobs. Between 2017 and 2019, for example, Amazon doubled the number of robots in its distribution centers from 100,000 to 200,000 while increasing employment company-wide and stabilizing robot density at roughly 3,000. Robots enabled Amazon to offer its free one-day delivery service to more Prime members as it continues to transform the ecommerce landscape.