This week, Tesla offered an “Acceleration Boost” software update to improve the Model 3’s 0-60 mph acceleration from 4.4 to 3.9 seconds. As shown in the chart below, this improvement would be the equivalent of adding roughly 85 horsepower (hp) to a gas powered car. 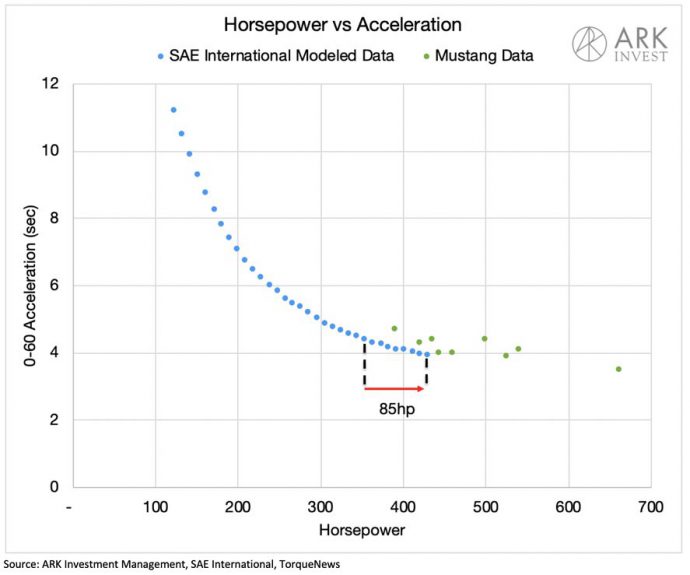 Tesla is charging $2000 for this over-the-air (OTA) software update, much less than such an improvement would cost in a gas powered car. Not only would switching engines to enhance horsepower require significant time and labor in a body shop, but it also would cost more than $4,000 just for the engine, as shown in the chart below. 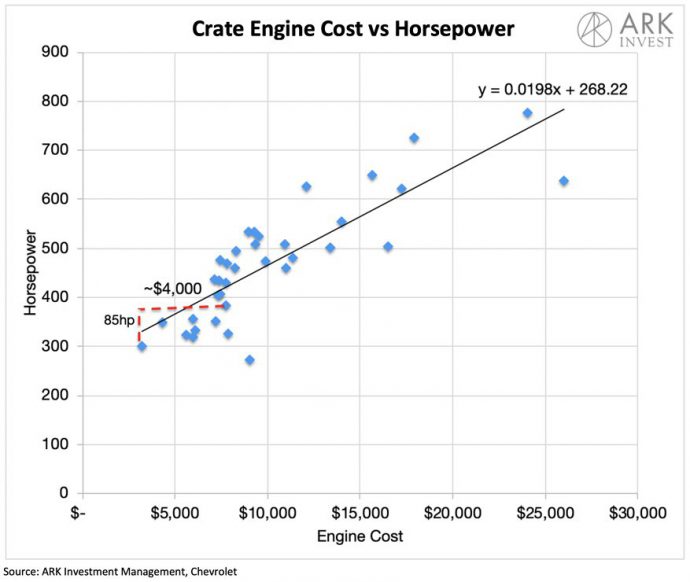 Highlighting Tesla’s lead in OTA updates, news broke on Thursday that VW is experiencing software problems with its ID.3 electric vehicle. ID.3 production could start with incomplete software, which means that more than 10,000 vehicles will be produced and require manual software updates to fix the problem. While Tesla is offering OTA updates for a fraction of the price of performance upgrades in traditional vehicles, other automakers are struggling with the transition to electric vehicles.

Historically, evaluating the financial success of a theatrical movie release has been straight forward. If ticket sales exceeded the costs of production and distribution, the movie has been profitable. Admittedly an oversimplification because movies can generate revenues in many other ways, this equation is a good basis of comparison for the streaming space.

Netflix, Disney, and other streaming companies are producing original content financed by monthly subscription fees. Without ticket sales for Netflix Originals, how can we value this new slate of “original content”?

Netflix spent $175 million to produce ‘The Irishman,’ the most expensive mob movie ever produced, as shown below. Netflix expects roughly 40 million households, or 25% of its subscriber base, to view the film in its first four weeks on the streaming platform. At its current monetization rate of roughly $0.17 per user hour of viewing, Netflix will have trouble turning a profit on the 3.5-hour long film in the short term. 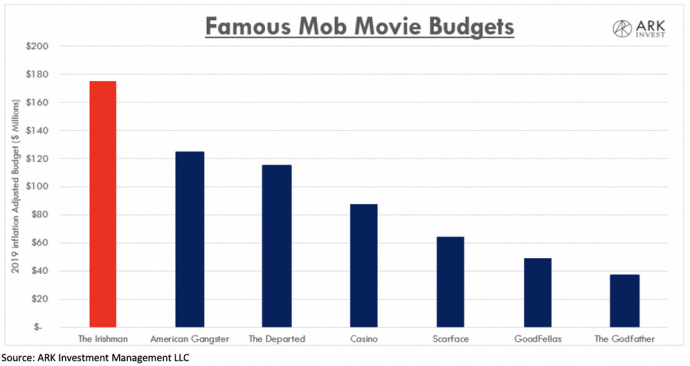 Netflix’s content budget will approach $15 billion this year, most of it for the production and acquisition of “original content.” To get a better understanding of the balance between its subscription pricing model and the profitability of these blockbuster movies, we will be analyzing three variables: budget, hourly monetization rate, and total viewership.

Stay tuned for a blog taking a deeper dive into our forecast of the profitability of Netflix’s “original content”.

3. Access to Credit Is Distributed Unevenly Throughout The US 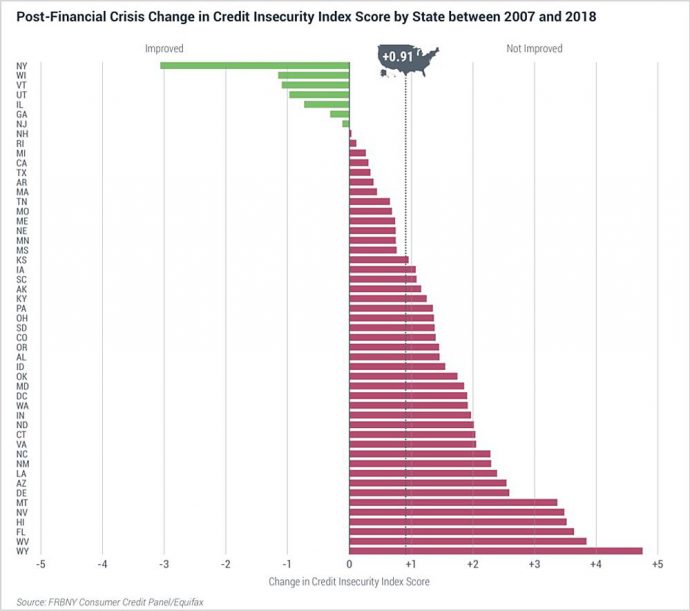 According to the map below, large areas of the US are not served well by the traditional financial system, suggesting that mobile wallets could take share from banks. Mobile wallets have a number of competitive advantages, including lower customer acquisition costs, more data to enable better pricing of risk, and democratized access. As a result, they should enable more equitable access to credit in the US and disintermediate the 20-90% of bank revenues associated today with credit card interest payments. 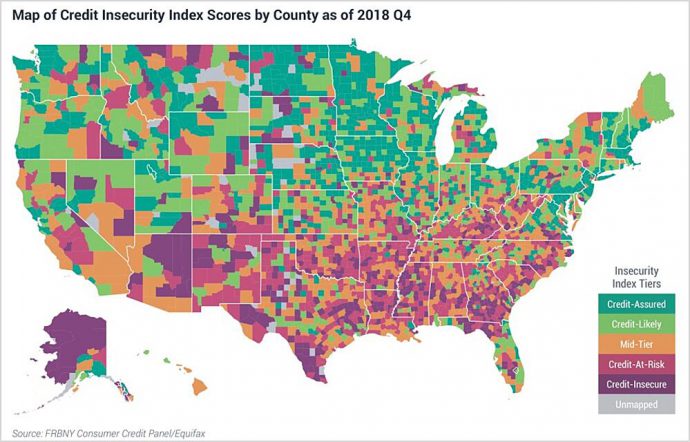 4. Nigerians Have Discovered a Clever Way to Use Bitcoin

In a recent piece, data analyst Matt Ahlborg states, “Paxful is the most important Bitcoin company you aren’t paying attention to.” Founded in 2015, Paxful is an online peer-to-peer (P2P) over the counter bitcoin exchange. As a P2P exchange, Paxful is a supervising authority and neither custodies assets nor interacts with any country’s banking or regulatory infrastructure. Unlike traditional exchange volumes that are correlated with the price of bitcoin, Paxful’s monthly trading volumes have been rising steadily, as shown in the graph below. 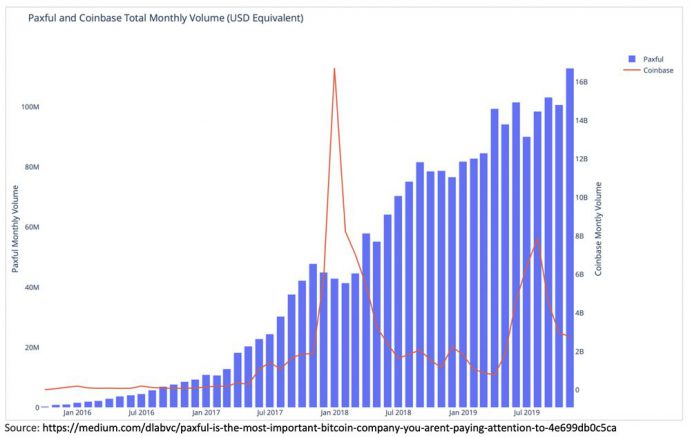 More than 60% of Paxful’s trading volume has been linked to USD denominated gift card trading, as shown below. A majority of the gift cards has been linked to Nigeria even though they have been purchased in the US. In other words, Nigerians have created a clever way to make cross-border payments and circumvent traditional rails with these gift cards and bitcoin. US immigrants are purchasing gift cards and sending their codes to individuals in Nigeria who upload them to Paxful and buy bitcoin. In fewer than 30 minutes, Nigerians then can acquire Nigerian naira in a bank transfer. 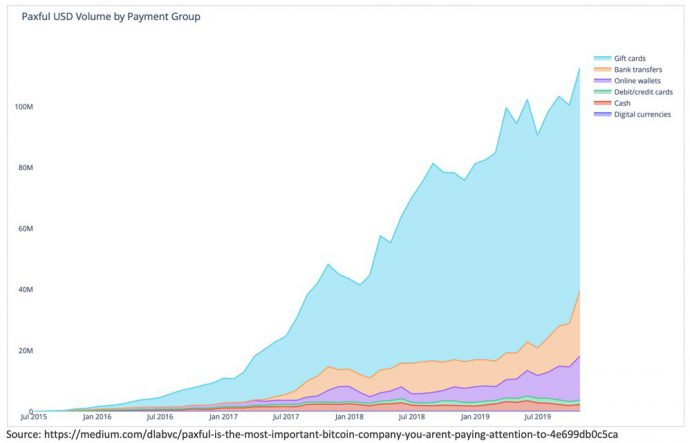 With this clever mechanism, Nigerians are choosing convenience over cost because traditional remittance rails like Western Union increasingly have become difficult to access.Matt Ahlborg’s analysis can be found here.

5. Nvidia’s Acquisition of Parabricks Should Expedite the Analysis of Genomic Data

Many open-source genome assembly programs are flexible, allowing them to run on myriad hardware setups at the expense of speed. GATK, a pre-eminent assembly pipeline, requires more than 30 hours to process one whole genome sequence (WGS) on a standard 48-core CPU instance. Illumina’s (ILMN) flagship NGS platform, the NovaSeq 6000, can generate up to 48 WGSs per day, highlighting the increasing importance of analytic tools. Parabricks tailored its software to Nvidia GPUs and published an article stating that its architecture – including proprietary software, Nvidia processors, and a Dell (DELL) storage cluster – will be able to analyze up to 1300 WGSs per week, or nearly eight genomes per hour.

6. Scientists Create CRISPR-Edited Pigs 3.0 to Address the Shortage of Organs for Transplant

On Thursday, scientists revealed a major advancement which could grow human organs in pigs in order to transplant them into humans. Renowned scientist, George Church, founded eGenesis, the company responsible for this breakthrough. While the paper has not been peer-reviewed, early signs suggest that CRISPR-Cas9 genome editing technology is responsible for the breakthrough.

According to US government statistics, 20 people each day – or 7,300 each year – die awaiting a transplant, while 115,000 people remain on the national transplant waiting list. As shown below, growth in the waiting list has outpaced the availability of donors and transplants significantly during the last 30 years.

The eGenesis team is perfecting porcine germline editing. Prior to this study, it inactivated 25 pig viruses linked to organ rejection. In its recent study, the team used CRISPR-Cas9 gene editing to remove 3 pig genes and insert 9 human transgenes into pigs. The paper concluded that edits – including the knock-down of porcine endogenous retroviruses linked to cancer in humans – were passed down to porcine offspring.

eGenesis’s success with pigs could lead to the transplant of kidneys, livers, pancreases, lungs, and hearts organs into humans, potentially alleviating the shortage of human organs.