1. CRISPR Could Transform Body Fat into Energy and Weight Loss

This study could have profound implications for CRISPR’s total available market. In the United States, more than 34 million people have diabetes and the medical costs and loss of work wages associated with it are valued at $327 billion annually. If CRISPR were to be effective in increasing insulin sensitivity, CRISPR’s total available market would expand significantly, if not exponentially.

“CRISPR could transform body fat into energy and weight loss.”

The path to commercialize new drugs, devices, or diagnostics is arduous and expensive. Contrary to popular belief, this path does not end once the US Food and Drug Administration (FDA) approves a product. Following FDA approval, the Centers for Medicare and Medicaid Services (CMS) conducts a lengthy, secondary review to determine reimbursement. While FDA decisions take roughly 200 days, CMS coverage determinations can take more than 500 days. Without reimbursement, companies receive little to no payment unless they win private payor coverage or collect out-of-pocket payments.

Alternatively, companies can pursue local coverage determinations (LCDs), or reimbursements set by Medicare Administrative Contractors (MACs) in any of 16 US geographic regions. Such disjointed coverage often harms not only patients who must travel to get treatments that the CMS will reimburse but also companies that must fund additional clinical studies required for CMS coverage.

For innovative healthcare companies, the window between FDA approval and CMS coverage – the so-called ‘valley of death’ – can be perilous. Prior to winning CMS coverage, companies can seek New Technology Add-On Payments (NTAP). NTAP, or crosswalking strategies, give companies an opportunity to receive reimbursements similar to those for existing medical products. Often, however, innovative companies are creating therapies and devices which bear no resemblance to existing products.

3. Is Tesla on Pace to Ramp Production Faster Than Ford Scaled the Model T?

Produced on the first moving assembly line in 1908, the Ford Model T is famous for the speed at which it scaled. Interestingly, in its first nine years of production, Tesla has ramped at the same pace as the Model T, as shown below. After learning lessons in “production hell”, Tesla now is preparing to ramp production even faster than Ford scaled the Model T, also shown below. 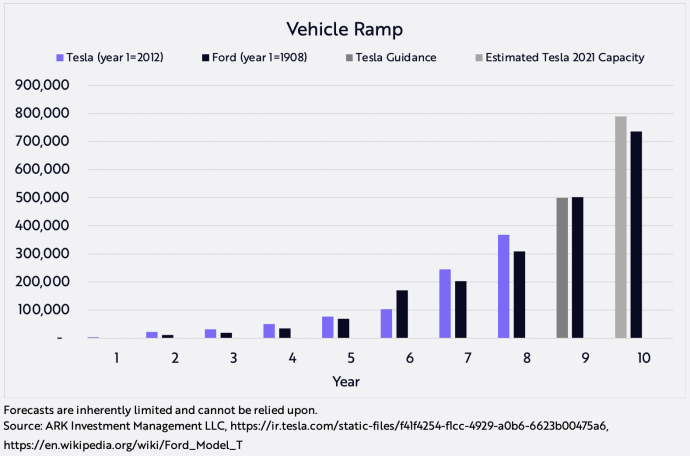 In China, Tesla broke ground for Model 3 production and hit a 200,000 annual run rate in just a year and a half, increasing its capacity by 33% to an annual run rate of roughly 800,000 in year 10, as shown by the gray bar above. Now with plenty of capital, Tesla has construction projects underway in both China and Berlin which, in only a year and a half, could add another 50%, or 400,000 units, to capacity.

4. The FAA Finally Cut Through Red Tape for Amazon Drones

This week, the Federal Aviation Administration (FAA) gave Amazon’s platform clearance to operate as a drone airline. With this certification, Amazon will be able to deliver commercial packages beyond line of sight, eliminating the burdensome requirement of a human operator monitoring drone flights visually from start to finish. ARK estimates that Amazon’s drones will be able to deliver packages for less than $1, giving it an opportunity to offer Prime customers free drone delivery as part of their memberships.

Offering inexpensive and frictionless delivery, drones could reshape consumer shopping behavior. According to ARK’s estimates, e-commerce as a percent of global retail sales could grow from 15% in 2019 to 60% by 2030, with drones accounting for half of the volume.

In the past year, the FAA accelerated drone delivery approvals, starting with UPS and Google’s Project Wing. In 2013, Amazon announced its first Prime Air program but, in the absence of FAA approval in the US, began testing its drones in the UK. Hopefully, the FAA’s recent wave of approvals will accelerate the pace of innovation in the US, allowing drones to transport small packages to consumers’ doorsteps someday soon.

5. Alipay and WeChat Pay Are Important Infrastructure Plays in China

In last week’s newsletter, we discussed Ant Group’s upcoming IPO and its massive scale now that Alipay’s mobile payment volume has topped China’s GDP by 12%. This week, we offer more insights about the usage of both Alipay and WeChat Pay, based on a recent Carnegie Mellon paper.

Based on the 80% of Chinese consumers using mobile payments, the majority uses Alipay for online shopping and WeChat Pay for offline shopping, as shown in the chart below. Alipay began as an Alibaba app for online payments and shopping while, in addition to peer-to-peer transfers, WeChat Pay dominated a category called Red Packets, or red envelopes. In 2014, WeChat Pay virtualized the cultural ritual of sending red envelopes containing cash gifts to friends or family and tripled its user base from 30 million to 100 million in a matter of weeks. 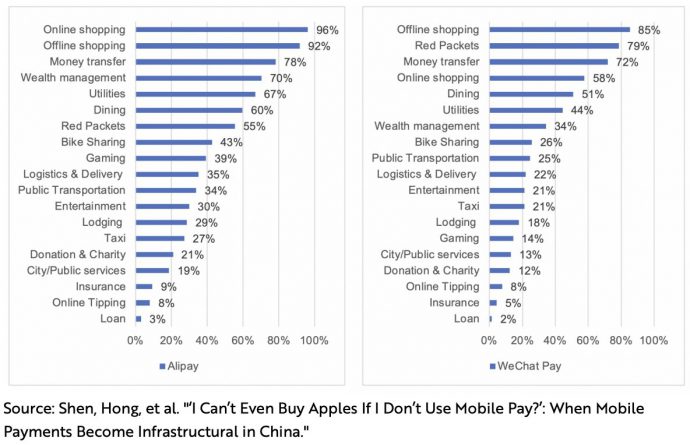 Most offline transactions involving WeChat Pay and Alipay use QR codes, a technology that survey respondents enjoy because it is “easy to see, easy to understand, and easy to act”. Importantly, QR codes are less complicated than Nearfield Communication (NFC) payments which require manual steps and wallet apps.

In restaurants, for example, diners can scan QR codes to see menus, select meals, and pay for them. According to the Carnegie Mellon authors, mobile payments are superseding “pre-existing artifacts” like menus and “practices” like ordering through servers and have become indispensable infrastructure in the day to day lives of the Chinese people.