Zafgen Offers Hope For The Obese

It is no secret that obesity is linked to health risks. Obesity is associated with a higher risk of cancer, diabetes, heart disease, and stroke, as well as the psychological effects from discrimination and the stigma. Weight is not the only excess, however. Spending is as well. Zafgen might have an answer.

Obese individuals spend on average 40% more on healthcare than those with average weight, increasing US medical costs by $161 billion [1] annually. Indirect costs add to the total, including $8.5 billion for absenteeism attributable to obesity,$378 million [2] in additional airline fuel, and $2.9 billion in additional automobile fuel.[3] Cumulatively, obesity costs the United States roughly $196 billion annually, as seen in the chart below, more than lung disease or Alzheimer’s. 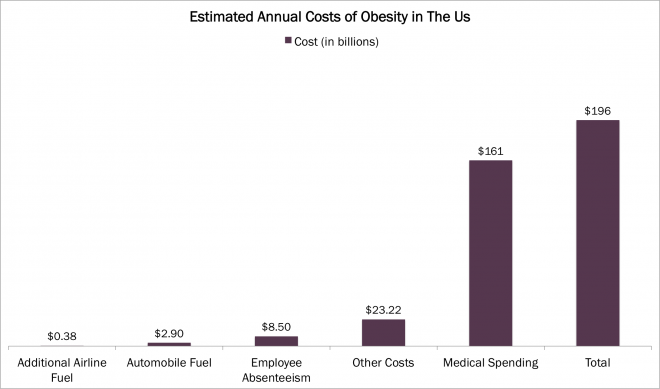 To make matters worse, obesity is on the rise globally. In the US, the Center for Disease Control estimates that roughly 34% of the population is obese. The World Health Organization reports the European rate at 50%. By 2030, obesity rates are expected to rise to 42% in the US, and as high as 80% in some European countries. As obesity rates increase, the costs to patients and society will swell also.

Some causes of obesity, like Prader-Willi Syndrome (PWS), are genetic. Currently without a cure, PWS triggers a chronic feeling of hunger that leads to obesity in adulthood. Treatments include growth hormone injections, bariatric surgery, and adult care facilities.

Other causes of obesity, like hypothalamic injuries arise due to brain tumors other traumatic injuries. The most common treatments, lifestyle management and bariatric surgery, are rarely successful and have undefined benefits, respectively.

Zafgen [ZFGN] is currently testing a compound, beloranib, which could be a cure for all types of obesity. Beloranib is administered by injection twice weekly. While less invasive than bariatric surgery, the injections may cause patient adherence problems.

Unlike current obesity drugs, which are psychoactive and seek to curtail cravings, beloranib targets metabolism and burns fats. Preliminary data is promising, with patients losing as many as 22 pounds in 12 weeks, roughly half the average weight loss after bariatric surgery. Beloranib stands out in a crowded market,with each treatment indication in Phase II trials or further, as shown in the table below.

Beloranib has fast-track and orphan drug status for treating Prader-Willi Syndrome, and is currently in Phase III trials for the indication. As shown above, the $2.3 billion domestic addressable market could be significant for Zafgen, which has a $1 billion market cap. The risks at this stage include potential clinical failure, the emergence of problematic side effects, and low adoption by physicians.

Zafgen is attempting to fight one of the world’s most pressing epidemics, and bringing hope to a market scarred by personal suffering and urgent economic need. Belornib could save the economy billions of dollars, and prevent millions from undergoing the physician’s scalpel. An injectable “skinny drug” that produces results without the risks and strain of surgery could garner significant demand from patients and physicians, and significant support from lawmakers and insurers. This does not mean that unforeseen side effects won’t arise. Zafgen has the potential to trim the fat not only around the waist, but in the budget as well.