We believe that key to Tesla’s viability and value is the gross margin of the Model 3. In the second quarter, Tesla reported auto gross margins of 17.2% excluding regulatory credits. Many bears believe that Tesla is in dire straits: Tesla is unprofitable and can’t support higher car prices without killing demand. Analysts have excoriated Tesla for its recent struggle to get auto gross margins above 20% and have forecast that they won’t top 25% [1] until the mid 2020s, if ever.

In this blog, based on a model powered by Wright’s Law, we forecast that the Model 3’s gross margin could double to more than 30% within the next 18 months. Wright’s Law has been successful in gauging cost declines in more than 60 technologies ranging from solar power to televisions, and semiconductors to ovens.

Applying Wright’s Law to more than 100 years of auto production costs, we demonstrate how well it has served companies like Ford. Now using Wright’s Law to forecast, and assuming the Model 3’s average selling price (ASP) remains at $49,000, we forecast its gross margins at more than 30% by the end of 2020.

Pioneered by Theodore Wright in 1936, Wright’s Law provides a reliable framework for forecasting cost declines as a function of cumulative production. Specifically, it states that for every cumulative doubling of units produced, costs will fall by a constant percentage. Since it began taking shape in the early 1900’s, the auto industry has enjoyed an 85% learning curve – which has translated into a 15% cost decline with every cumulative doubling of units produced. Ford’s Model T conformed exceedingly well to Wright’s Law from 1909 to 1923, as shown below. 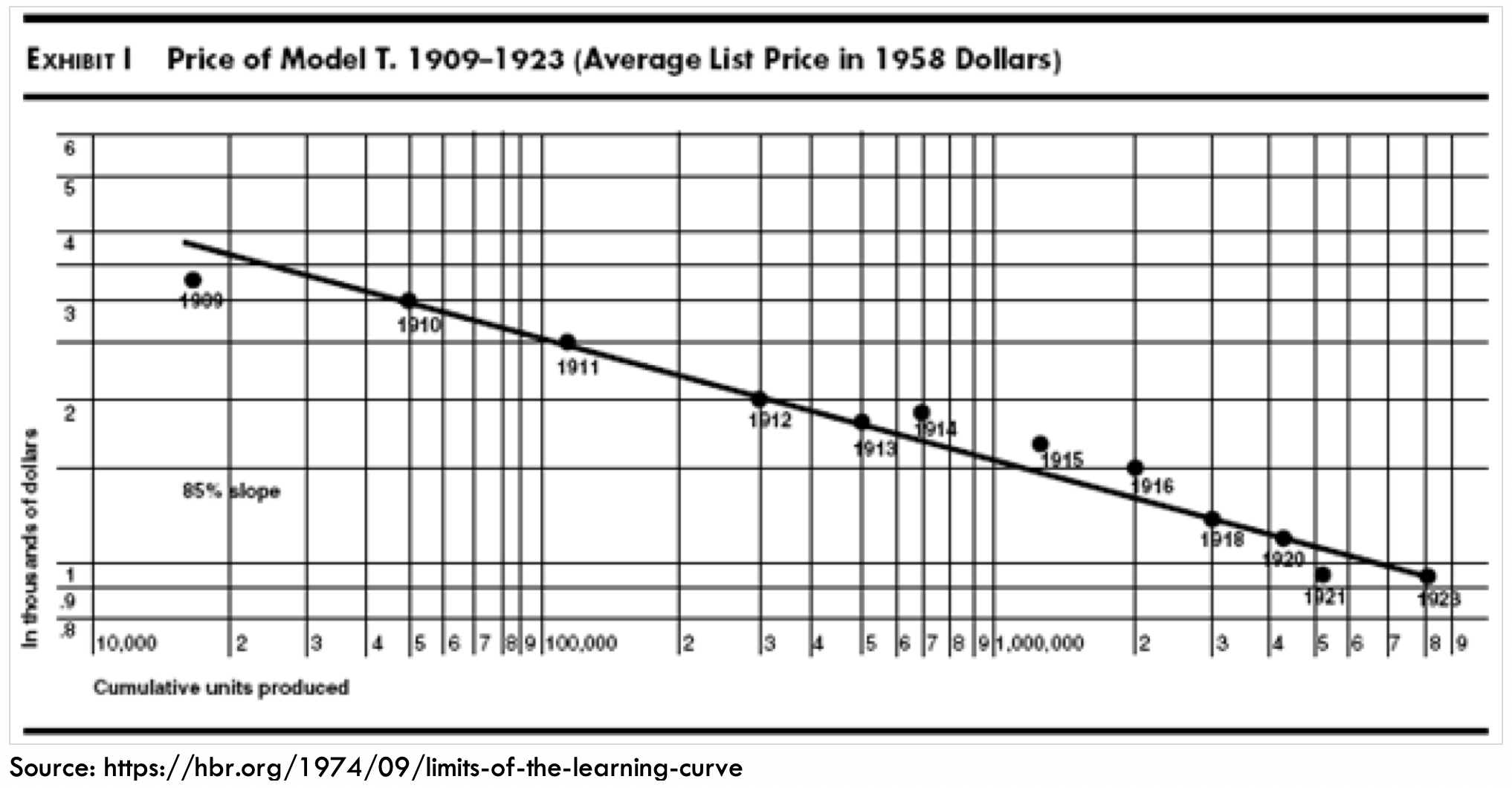 With an 85% learning curve, the Model 3’s cost curve also submits to Wright’s Law, as shown below.[2] For every cumulative doubling of its production, Model 3 costs fall by roughly 15%.[3] An important consideration in understanding this calculation is the word “cumulative,” meaning the number of Model 3s Tesla has manufactured since its launch. 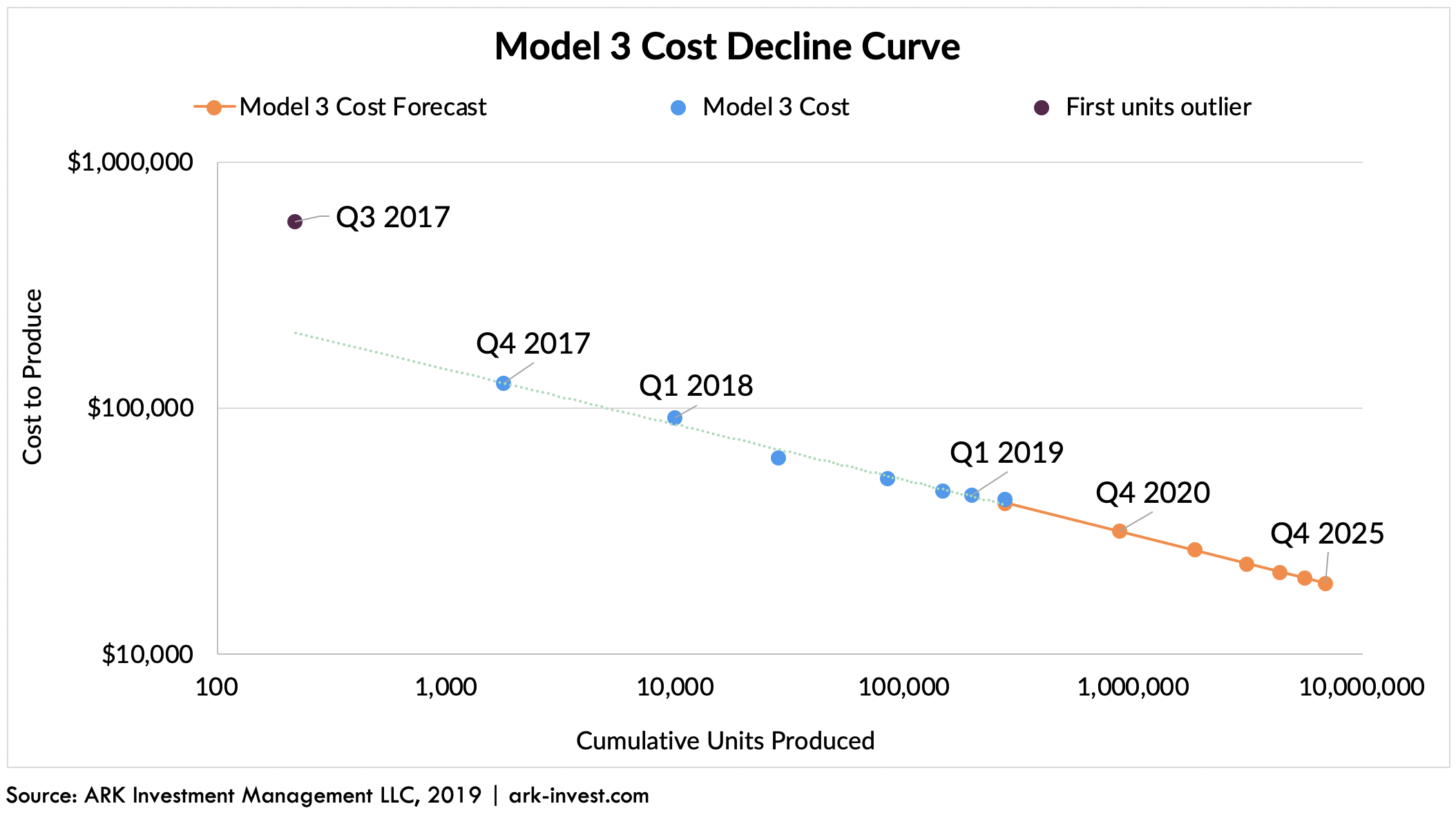 The notion of a cumulative doubling is not intuitive, often causing a misreading of charts depicting Wright’s Law. Unlike most charts, for example, in the chart above the x-axis is not a function of time but of the total number of units produced in the history of the product, in this case the Model 3. Skeptics of this methodology seem to extrapolate the slope of the line and conclude that the cost of all products ultimately will fall to $0, a serious misinterpretation. Cumulatively doubling the number of units ever produced is exponentially more difficult with each turn and would overwhelm demand, not to mention require more matter than exists in the universe, if applied to the gas-powered car and light duty truck market.  As a result, the line terminates at a fixed point rather than $0.

Even though Wright’s Law worked for the Model T, we believe many analysts conclude mistakenly that the introduction of the moving assembly line was the primary reason and that as a result the step function decline in costs was not sustainable. In reality, Wright’s Law has worked throughout the auto industry’s history. Since selling just under 2,000 Model As for an inflation-adjusted ~$23,000 in 1903, Ford as a proxy for the gas-powered auto industry has been on a consistent cost decline, as a function of units sold. Wright’s Law suggests that it would be able to manufacture the Model A today for ~$1,500. The original Model A had 8 horsepower (hp) and a top speed of 28 mph. While Ford no longer sells an 8 hp car, the Tata Nano and Mahindra’s rickshaw – both at 8-37 hp and a weight similar to that of the Model A – cost ~$2,100. If auto buyers still were willing to pay $23,000 for an 8 hp car in the US today, then Ford’s gross margins would approach 90%+.[4] 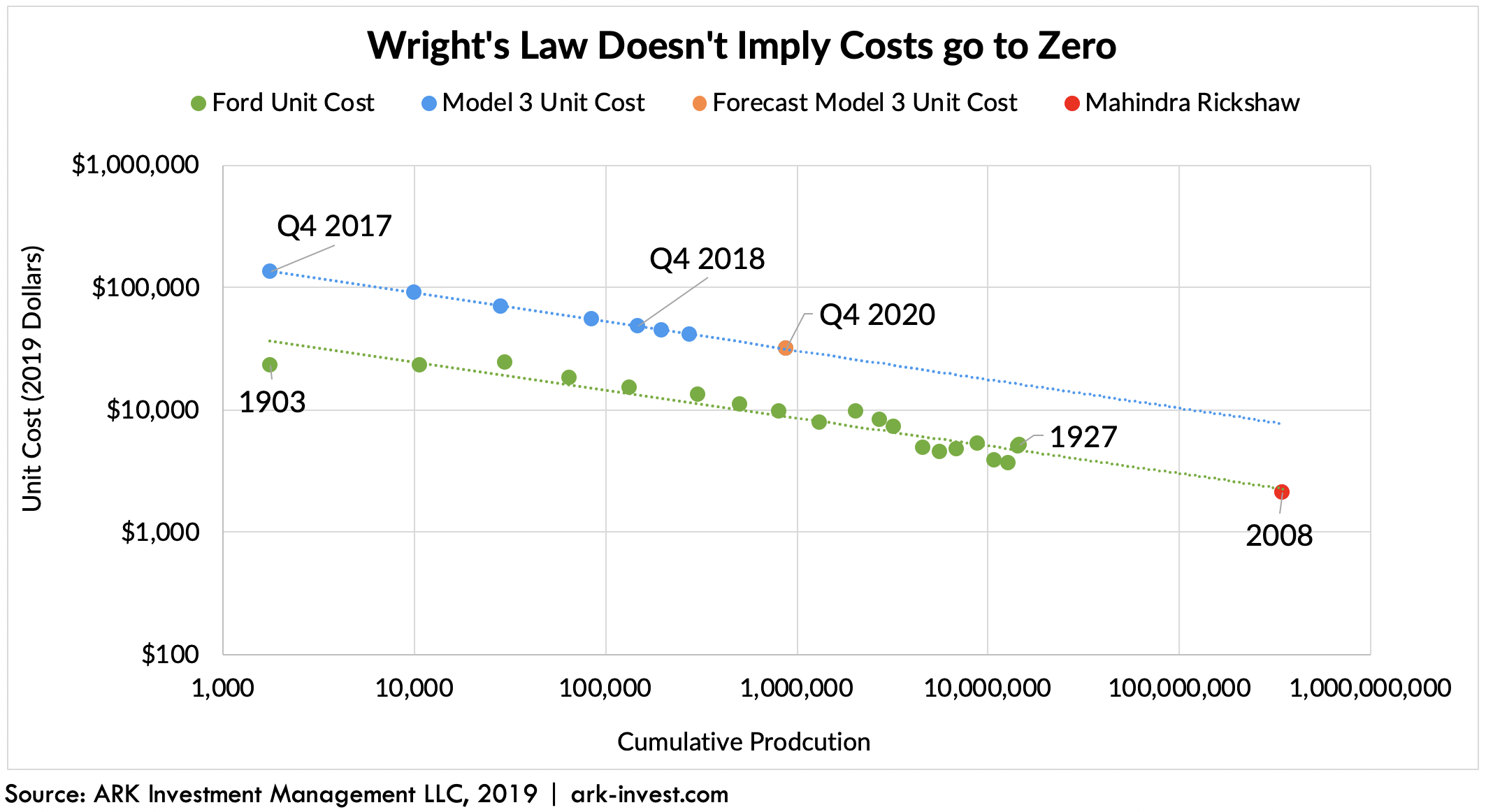 In reality, the cars we drive today are far superior to the Model A. We enjoy safety features like airbags, power steering, and antilock braking, as well as luxuries like radios and air conditioning, and speeds faster than 30 mph.

Wright’s Law must be evaluated according to a metric that incorporates improvements in performance. In the auto industry, that metric is cost per hp. According to Wright’s Law, then, the cost to build a Model A should have dropped from ~$3,000/hp in 1903 to ~$167/hp in 2012 when it manufactured its 350 millionth car, as shown below.[5] In 2012, Ford manufactured the Fusion, Focus, Taurus, and Fiesta for ~$135/hp on average. In other words, Wright’s Law was close to the mark after the production of 350 million cars. 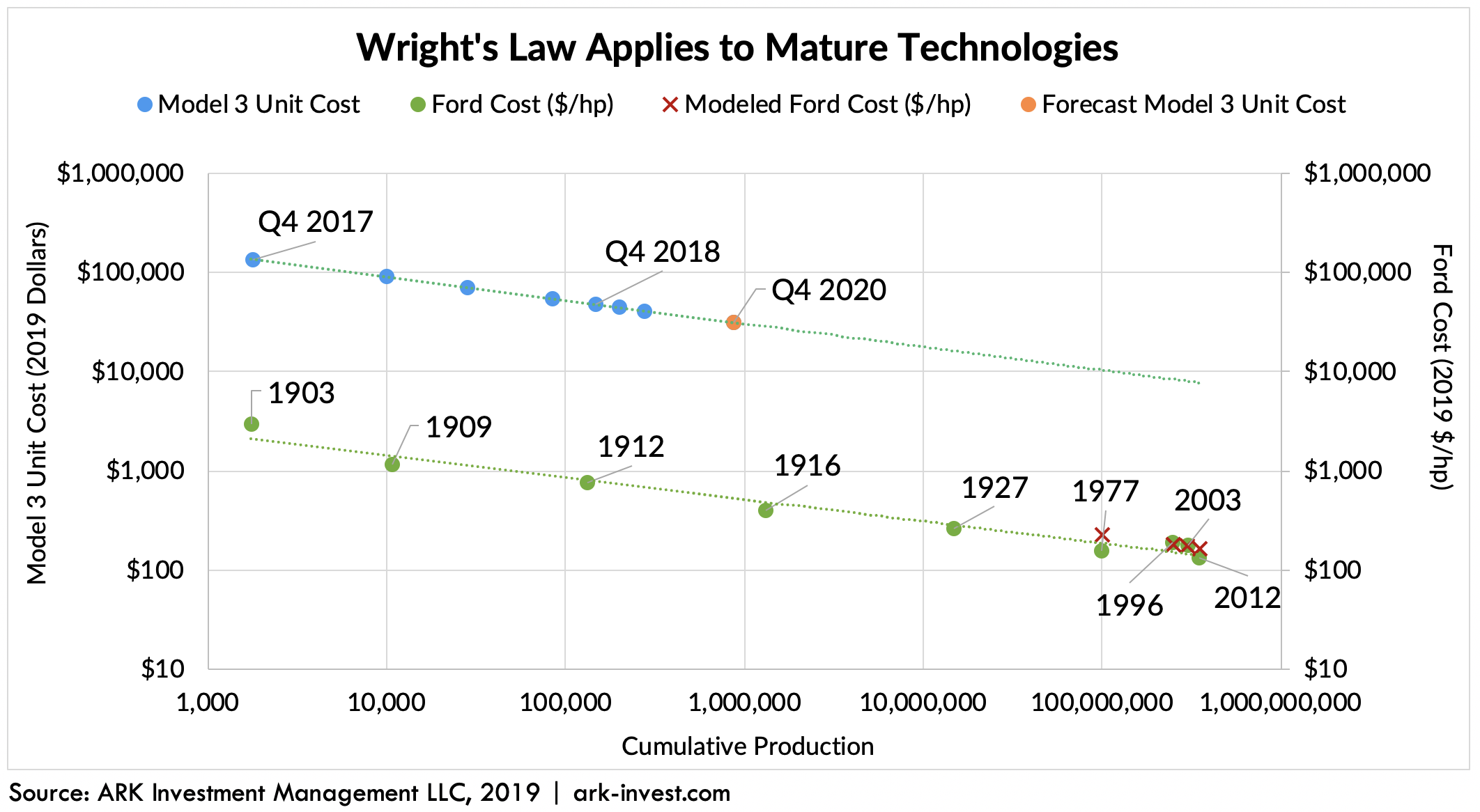 A mature technology appears to stop declining in price because it takes so long to double production off of a large cumulative base. Globally, automakers have manufactured only 3.4 million electric vehicles (EVs) over time, less than 1% of the 2.5 billion internal combustion engine (ICE) vehicles ever made,[6] as shown in the chart below. As a result, even if the production of ICE vehicles were to stabilize at ~90 million vehicles annually, its cumulative doubling would take 29 years, compared to roughly one year for EVs. Wright’s Law applies equally to both technologies but the difference in time to achieve a cumulative doubling explains the difference in annual cost declines: the cost of the average ICE vehicle will edge down by ~0.5% in the coming year while that of its EV counterpart costs will drop by ~12%.

Through the second quarter of 2019 Tesla had manufactured just over 275,000 Model 3s since its launch. According to Wright’s Law, the cost to produce a Model 3 should drop by roughly 23% as it scales to an additional 600,000 cars which, according to our analysis, should occur by the end of 2020.

The ability to lower costs is giving Tesla significant operating flexibility to reinvest profits into more R&D or to lower ASPs and stimulate demand. It has been doing both and probably will continue to do so. As a result, and as shown below, even as Tesla lowers its price, the gross margin on the Model 3 should increase.

Those concluding that Tesla is structurally unprofitable appear to be fighting the entire history of auto manufacturing. We believe the path forward is clear.