Big Ideas 2022 Report Is HereDownload Now
ARK Invest> Analyst Research> Will Automation Cause an Increase in the Unemployment Rate?

Throughout history, automation has sparked fears of unemployment, even though technology appears to have been a net job creator over time. Yet, with each wave of innovation, we believe the conventional wisdom returns to: “This time is different”.

In this piece ARK will feature two historical points overlooked by those criticizing the impact of automation, particularly robotics and artificial intelligence (AI) today.

We believe several industries have served to illustrate these points and others will continue to do so, among them agriculture, food, autonomous vehicles, and manufacturing. During the 30 years ended in the early 1970s, for example, the percentage of farms with tractors increased from roughly 20% to more than 80%, as shown below. Because farming accounted for 21.5% of US jobs in the 1930s, the shift to tractors caused fears of massive unemployment and another depression. 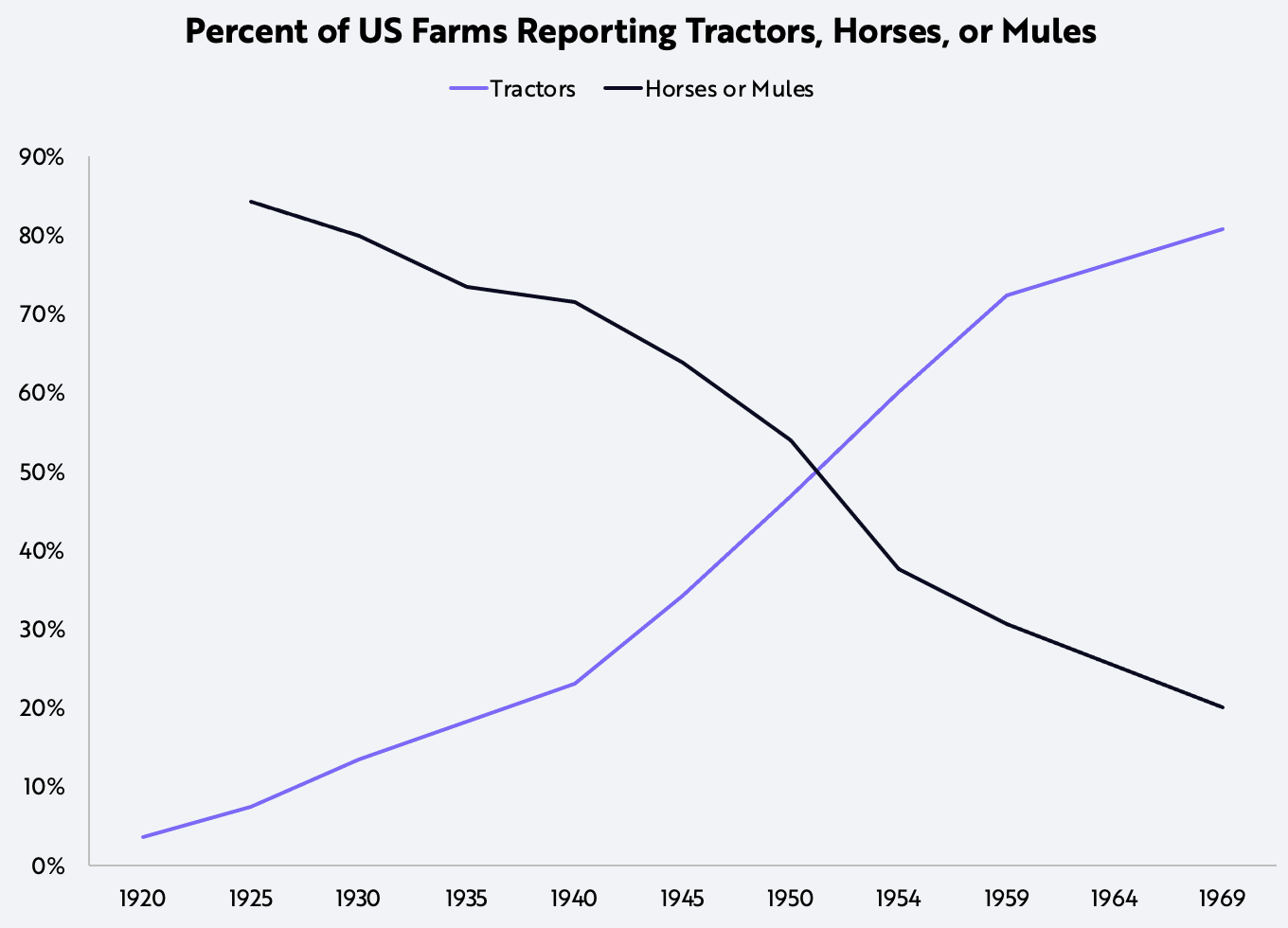 The switch from mules to tractors caused a boom in labor productivity, or output per labor-hour. In 1945, to produce 100 pounds of lint cotton with two mules, a farm had to devote 42 labor-hours and nearly half an acre of land. Thirty years later in 1975, farms with tractors produced the same amount of cotton with only 2.5 labor hours and less than 0.25 an acre of land, as shown below.[1] In other words, labor productivity soared more than 17-fold. 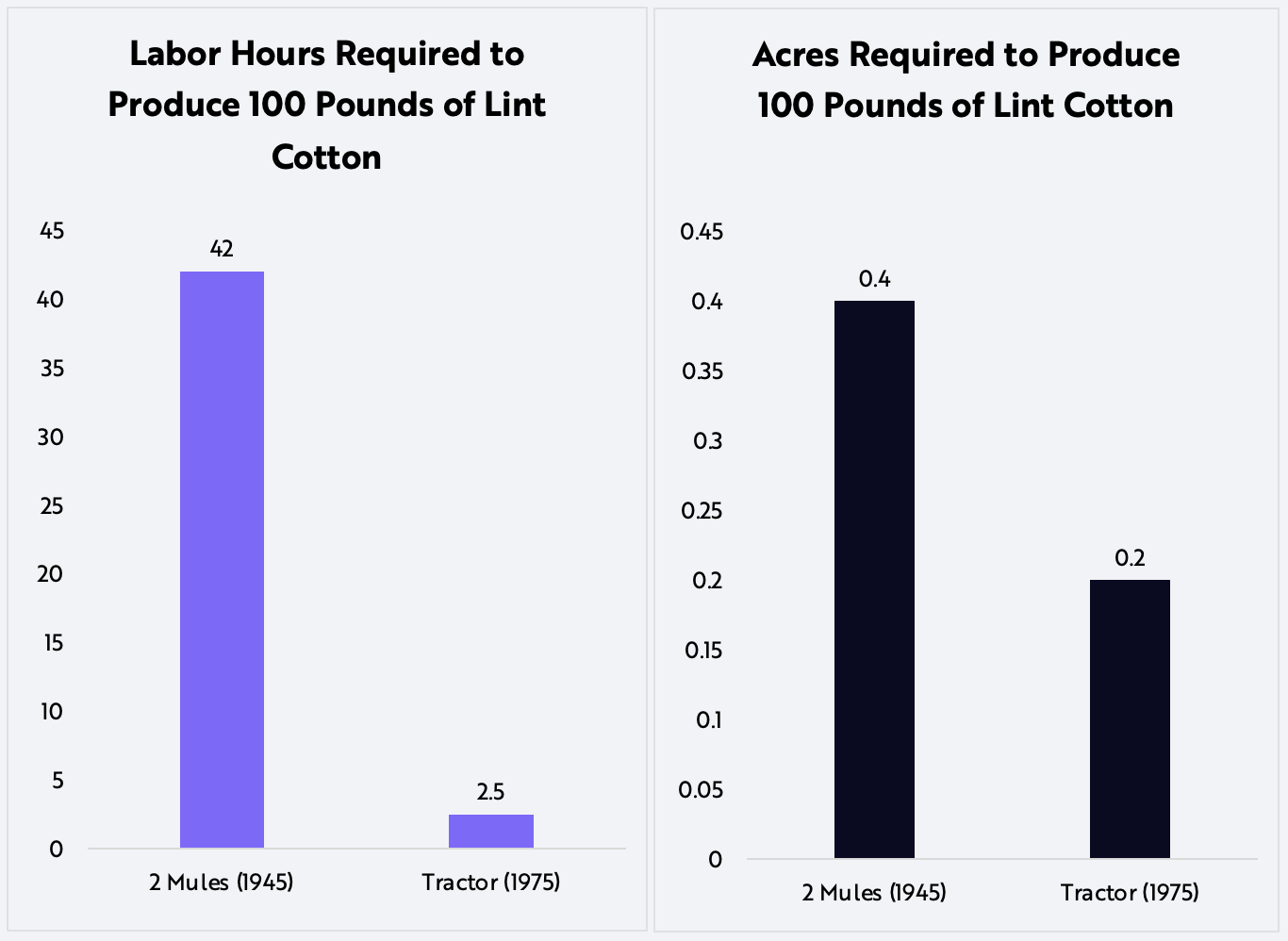 Farm automation created more valuable jobs and higher wages. Thanks to tractors, real farm wages increased more than 76% from the 1940s to the early 1970s, as shown below. 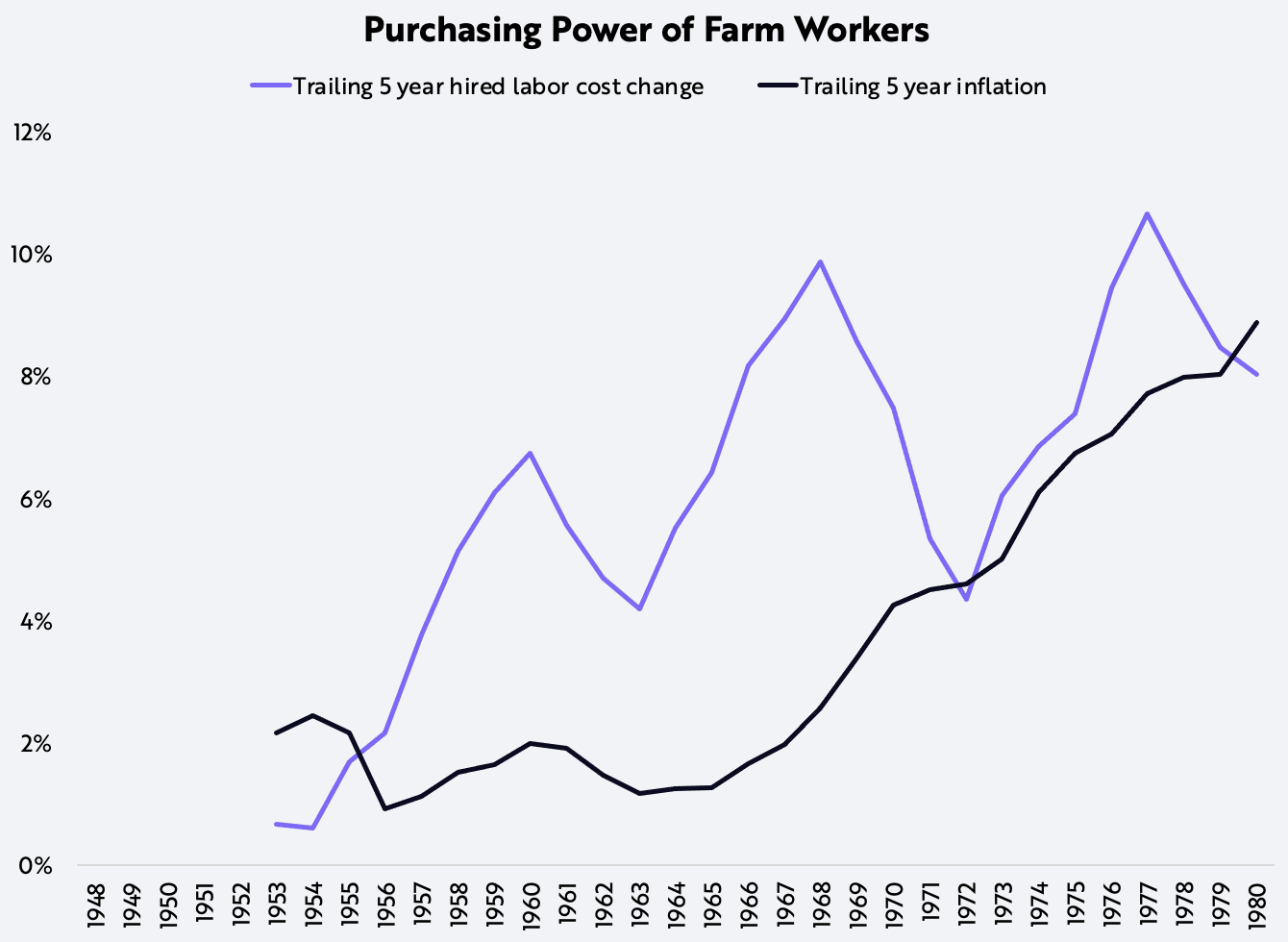 Yet critics tried to change the subject, focusing instead on the drop in total labor hours. Indeed, between 1950 and 1975, total employment in US agriculture did decline from roughly 10 million to 4 million, but 82% of the 6 million “jobs lost” were associated with unpaid family workers, as shown below,[2] who had the opportunity to search and then find paid employment. 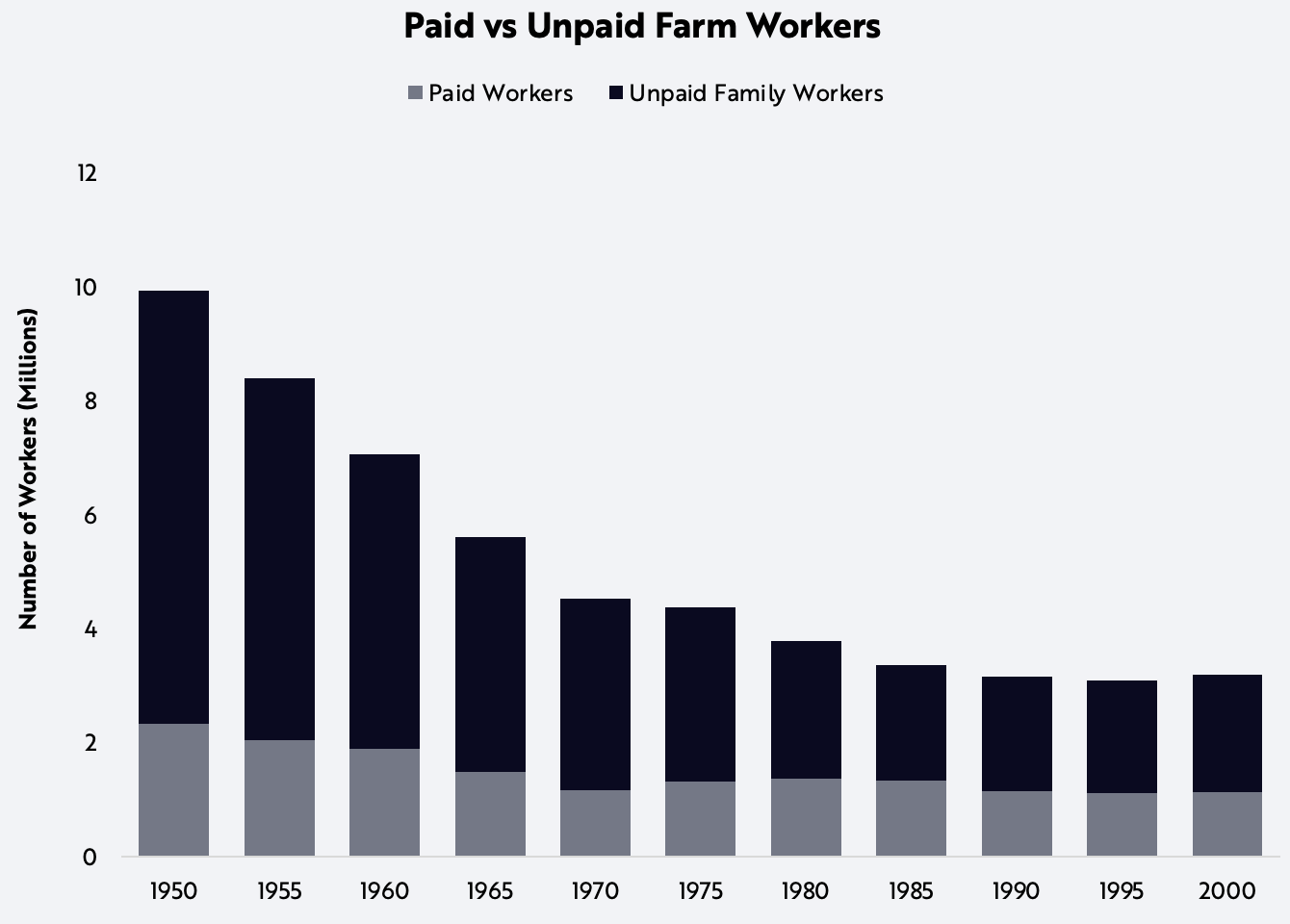 This labor dynamic has not been limited to agriculture. Automation has transformed “unpaid” labor into “paid” labor in other industries. The washing machine, for example, monetized the unpaid time spent cleaning clothes. In the future and as shown below, the automation of food services is likely to commercialize the non-market activity associated with grocery shopping and food preparation/cleanup into more cost-effective food delivery alternatives.

Transportation is likely to submit to the same dynamic, as the time a person spends commuting is “unpaid”. In the US, the roughly 1.1 million professional taxi/ride-hailing drivers[3] and 225 million “non-professional” drivers spend roughly $0.70 per mile to operate their own cars. ARK’s research demonstrates that, with remote operator networks handling corner cases, mature autonomous taxi networks could offer transportation services for just $0.25 per mile, obviating the need for the 1.1 million professional drivers and incentivizing 225 million non-professional drivers to go autonomous. In their early days, ARK estimates that the number of remote operators necessary to scale autonomous taxi networks would be triple the number of professional drivers employed today, roughly 3 million, all of whom would commercialize the trillions of dollars now categorized as non-market activity.

While ARK believes that automation is an important economic force in lowering inflation and accelerating real GDP growth, several other trends seem to have impacted outcomes during the past 15-20 years. Despite productivity gains in manufacturing, for example, real manufacturing wages have been falling, as shown below, perhaps because of the increase in offshoring after China entered the World Trade Organization and the concomitant decline in union employment. 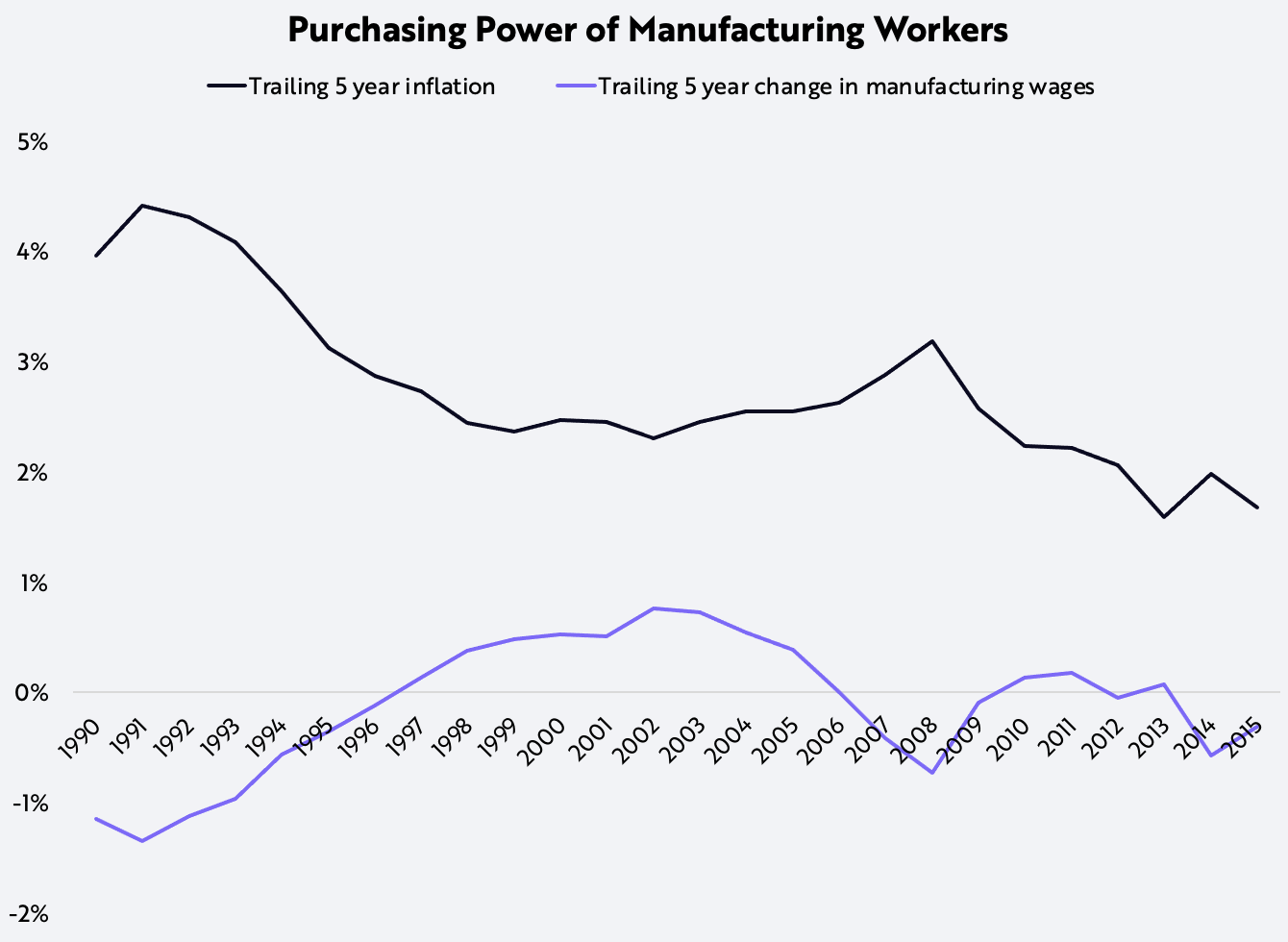 Tags: Artificial Intelligence, China, Healthcare, Market Insights
See More
See all articles
You are leaving ark-invest.com
By clicking below you acknowledge that you are navigating away from ark-invest.com and will be connected to ark-funds.com ARK Investment Management LLC manages both web domains. Please take note of ARK’s privacy policy, terms of use, and disclosures that may vary between sites.
PROCEED