In fewer than five years, Clustered Regularly Interspaced Short Palindromic Repeats, or CRISPR genome-editing technology, has taken the scientific community by storm, not only revolutionizing the pace of biological breakthroughs but also promising medicines that cure diseases now considered incurable. Please enjoy a primer to assist in understanding DNA, the human genome, and the rise of CRISPR. For an in-depth review of CRISPR and the investment opportunities please download our research white papers on “The CRISPR Market Opportunity and Key Players” and “The CRISPR IP Landscape”.

The structure of DNA, the double-stranded helix 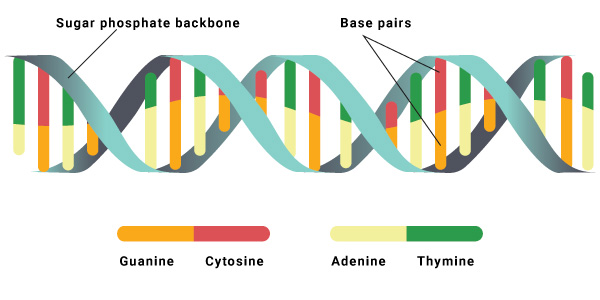 The human genome is composed of 3.2 billion base pairs of DNA, or lines of code, a single error in which could cause disease. Biological tools are evolving that should be able to correct these errors, or mutations, easily and cost-effectively, making cures for diseases possible for the first time in history.

The ability to control genes holds the promise of a cure for any disease. The 23,000 genes in each human genome contain instructions that guide the production of proteins, which are the building blocks that govern the functioning of the human body. Proteins fight infections, carry oxygen, clot blood after injury, and control muscle movements. They regulate brain signals, trigger smells, and form finger and toe nails. Each of these functions depends upon precise amounts of specific proteins.

The Rise of CRISPR
Gene-editing debuted during the biotechnology revolution. As shown below, the first targeted edit was in a yeast cell during the 1980s. Major therapeutic breakthroughs associated with gene-editing have taken place only in the past decade. Today, genome-editing is a rapidly developing field for 21stcentury medicine. 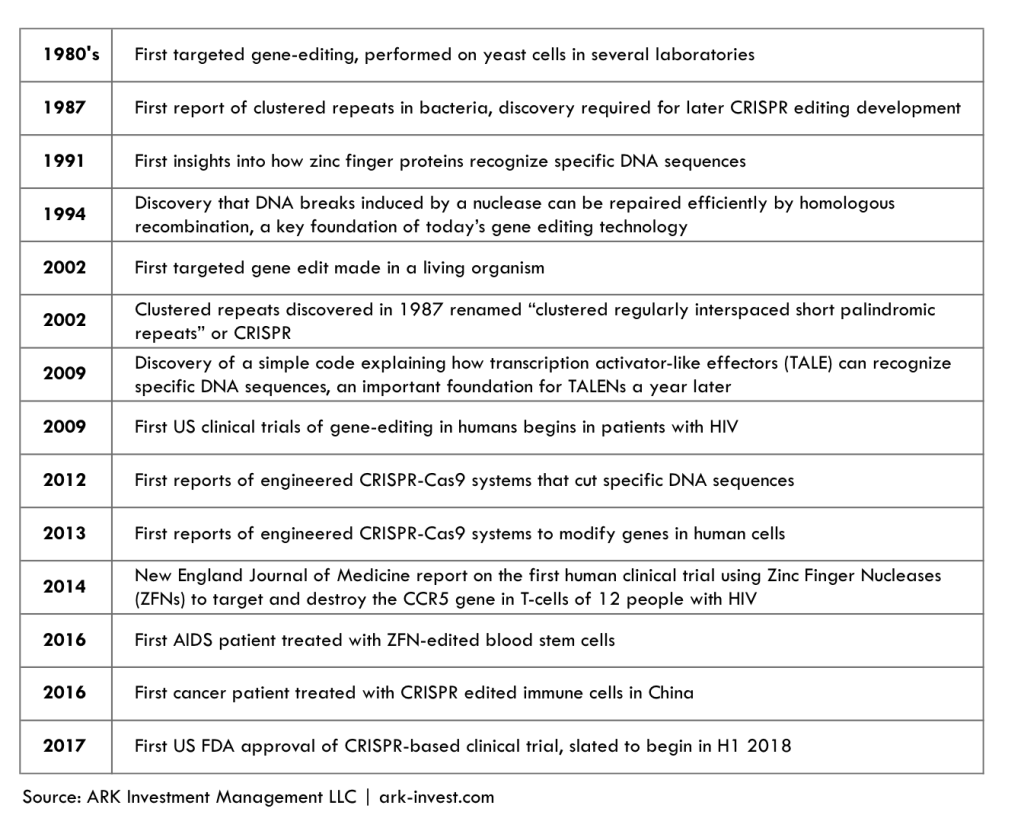 CRISPR is a simple, powerful and programmable genome-editing tool. An acronym for Clustered Regularly Interspaced Short Palindromic Repeats, CRISPR was discovered in a study of viral invaders and bacterial immune defense systems.[1]

According to ARK’s research, unlike previous gene splicing tools, not only does CRISPR have a wide range of applications, but it also is accessible and fast. While associated primarily with gene-editing today, CRISPR ultimately will be able to control gene processes and protein expression.  As a result, CRISPR is evolving into a novel technology platform in the bioengineering space, accelerating innovation in a number of areas, including:

Tags: Energy Storage, Sustainability, Sustainable Investing, Wright's Law
See More
See all articles
You are leaving ark-invest.com
By clicking below you acknowledge that you are navigating away from ark-invest.com and will be connected to ark-funds.com ARK Investment Management LLC manages both web domains. Please take note of ARK’s privacy policy, terms of use, and disclosures that may vary between sites.
PROCEED