If Uber uses shared autonomous vehicles (SAVs), it could charge as little as $0.35 per mile,[1] much less than the $0.70 per mile that individuals pay, both directly and indirectly, to drive their own cars today. While individual car ownership will not disappear entirely, it is likely to fall precipitously shorter term in the sharing economy thanks to Uber, ZipCar [CAR], et. al., and longer term thanks to SAVs.

While individuals drive their cars for only one hour, or 4%, per day on average, SAVs will allow them to capitalize on their cars during the other 23 hours.[2] Uber, for example, could leverage its existing dispatch platform, giving auto owners the opportunity to rent their cars between the time they and their children are dropped off at and picked up from work and school, respectively, as in the example shown below.[3] Owners with an unpredictable schedule could opt-in or opt-out on an hourly basis. 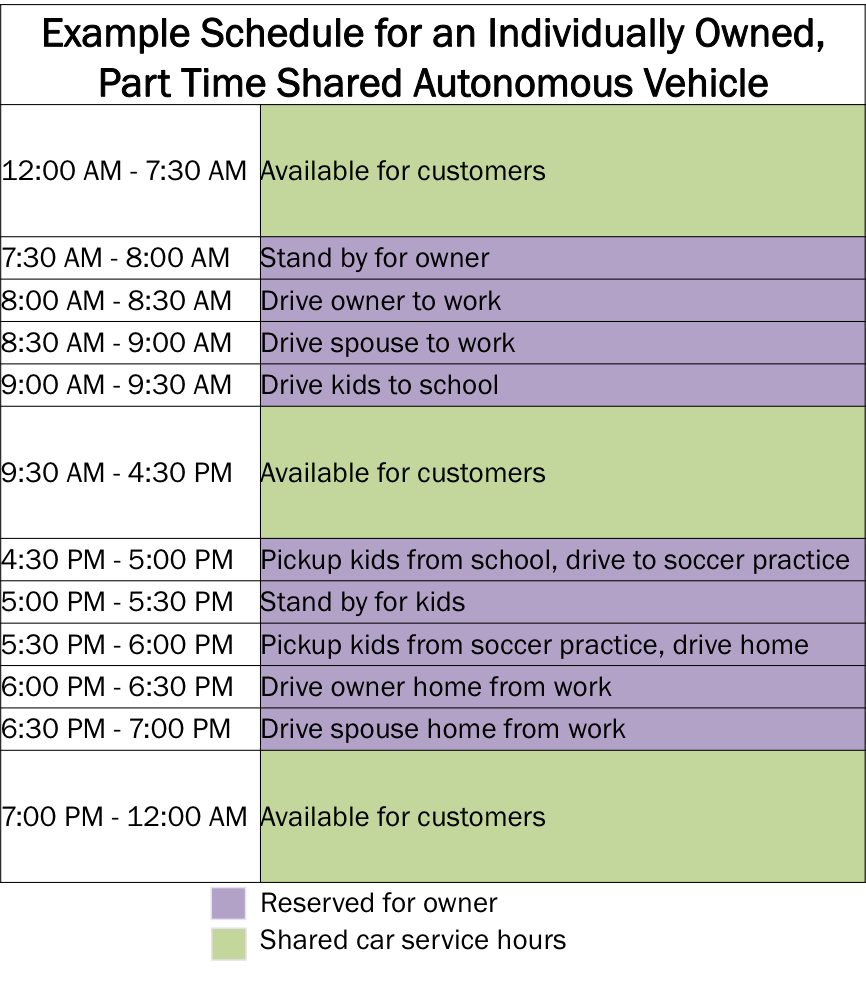 Given current economics, owners could recoup more than half the purchase cost of their shared autonomous vehicle within five years by renting them out part time. Today, a new car costs an average of $30,000. The incremental price of autonomous technology could be $1,000 – $2,000 [4] by 2020, when autonomous vehicles are expected to commercialize. Theoretically, pricing rides at 35 cents per mile, equivalent to an autonomous taxi, an SAV owner could earn more than $13,000 [5] per year, potentially defraying the cost of the SAV.

Prices for a SAV service will vary based on competition and type of vehicle. For example, if multiple houses in a neighborhood were to own SAVs, pricing would be lower than if only one were available. Even if competition were to push prices down to about 20 cents per mile, however, owners still would profit.[6] As with Uber, an autonomous dispatch platform could incorporate a surge pricing mechanism, increasing supply to accommodate demand and adding to profitability. Luxury vehicles such as the Tesla [TSLA] Model S or Cadillac [GM] CT6 also would command a premium.

Apart from the taxi model, part-time SAV owners could provide chauffer service to a small, vetted customer base. Comparing the economics of SAVs to those of chauffeur services and Uber’s current service offering casts the value proposition of SAVs into stark relief. The cost of personal drivers ranges from $70,000 to $125,000 per year. The current cost to use Uber’s service would be at least $30,000 per year in New York City, based on the 13,500 miles per year that the Federal Highway Association estimates people travel per year on average. In contrast, the cost of an SAV chauffer would be 84% lower, or $4,725 per year,[7] as shown below. 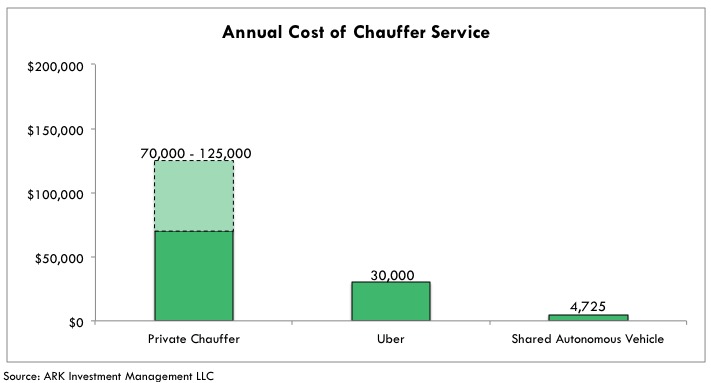