TV advertising, which has grown almost every year since its introduction in the 1940s, is facing secular decline during the next decade. Among the forces causing this shift are a generational change in viewing habits, as shown below, and the growth of new digital video ad formats that are both engaging and measurable. 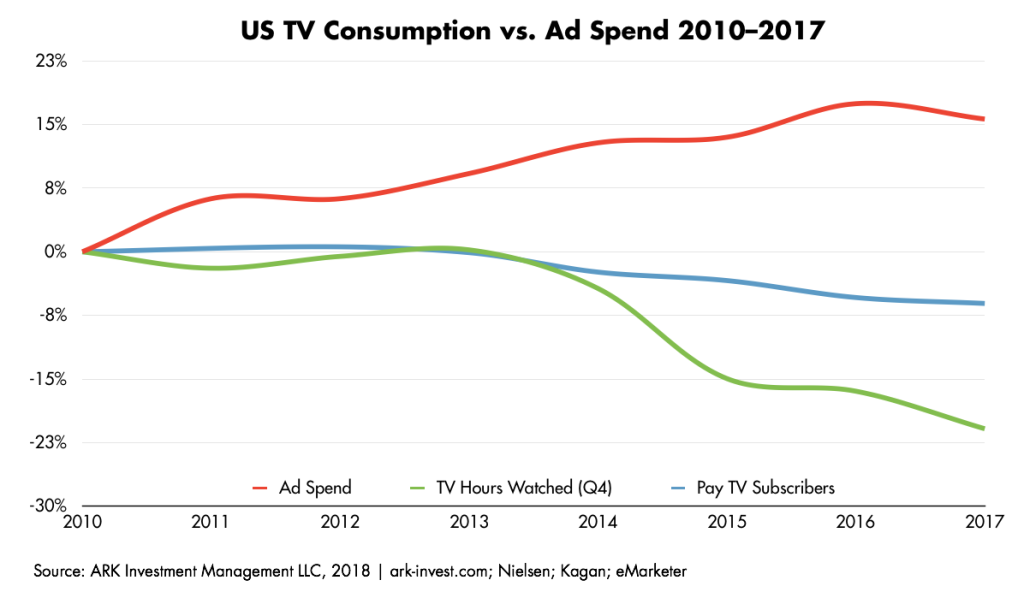 TV ad spending and viewing hours are diverging increasingly in the US. TV advertising has increased 16% cumulatively since 2010 while total adult viewing hours have dropped by more than 20%, according to eMarketer and Nielsen respectively.

As the only media format reaching the mass market in primetime hours, TV has commanded high and rising prices over time. Now, however, its viewers are starting to tune out.

At the heart of this shift is a generational change in viewing habits. Thanks to streaming video services like YouTube[GOOG] and Netflix[NFLX], almost half of adults aged 22 to 45 consume absolutely no content via traditional TV. When they do tune in, audiences are likely to be multi-tasking on their phones and otherwise during commercial breaks, most times at the expense of TV ad recall.

As TV viewing dwindles, investment is pouring into online or streaming video. Netflix and Amazon[AMZN] together now spend more than $10 billion a year on content and, with upcoming streaming services from Disney[DIS] and ESPN, the breadth and depth of content is set to explode, accelerating the shift of viewers from analog to digital. 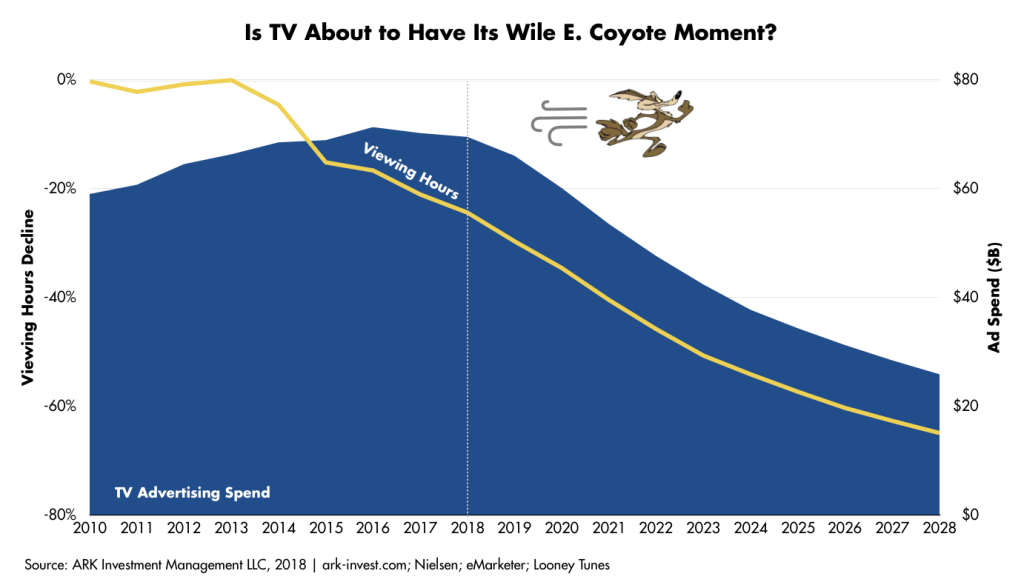 If the loss were to accelerate, TV viewing hours could drop to less than half their 2010 levels by 2023 and less than a quarter by 2028, as shown above. While it has defied gravity thus far, TV ad spending will probably not be able to tempt fate for much longer. In fact, it may be having a Wile E. Coyote moment now: it’s off the cliff but hasn’t started falling…yet. Based on ARK’s research, if ad buyers begin to factor viewership into their spending plans, the US TV ad market could fall from $60-70 billion today to $30 billion over the next decade.

As TV advertising enters secular decline, ad supported internet videos are exploding, offering an alternative. YouTube viewership, for example, has scaled more than 10-fold since 2012 to more than a billion hours per day. In addition, Facebook[FB] and Twitter[TWTR] have partnered with TV networks such as CNN[CNN], Fox[FOXA], and Bloomberg to produce original programs with mid-roll advertisiTng. Finally, new formats like Snapchat[SNAP] and Instagram Stories are turning social media updates into short-form user-generated videos that are perfect for mobile advertising.

Digital video ads can target customers, measure outcomes, and inspire immediate conversion in ways impossible for conventional TV ads. Facebook video ads, for example, can target users by age, interest, and geography. YouTube TrueView ads provide a “Skip” button so that advertisers pay only if viewers watch the full ad. Instagram Stories ads can link directly to a webstore, offering brand advertising and customer conversion in a single step. In other words, digital video ads are less annoying and more  effective than generic, irrelevant TV advertising, which can be tuned out.

The erosion of TV viewership is just beginning. ARK believes the explosion of streaming content in coming years should accelerate the shift of attention from TV to digital. Advertisers today have yet to respond to this change in a meaningful way, but any number of factors, including a recession, could trigger a change in sentiment and send TV to the same fate as print advertising, which has been cut in half.  If so, US TV networks alone could cede $30 billion of revenue to internet giants like Google, Facebook, and Amazon, adding another leg to their long-term growth.