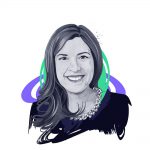 As proposed in our previous research, investment analysts using antiquated throughput rates to determine future ones could be undervaluing clinical assets at each stage of development. Next generation sequencing (NGS), artificial intelligence (AI), CRISPR, and other gene therapies should boost clinical trial efficiency, shorten development timelines, and reduce failure rates. As a result, return on investment could improve dramatically.

Recent advances in neural network protein modeling could reduce the costs of clinical pipelines and increase returns on drug R&D beyond what we initially modeled. Based on our ongoing research in this space, we now believe pre-clinical development could become even less expensive and yield results more quickly: a marketable therapy cost only $50 million in pre-clinical investment—halving the number we estimated previously.

What Changed?
Alphabet subsidiary Deep Mind announced AlphaFold, a neural-network-based algorithm that can predict protein folding, as well as an open-sourced database of protein structures powered by AlphaFold2. Based on their amino acid sequences, the database predicts the 3D structure of roughly all known human proteins, approximately 350,000.

Critical to life on earth, proteins comprise thousands of linked amino acids that determine their shape and interaction with other molecules, including drugs. To understand those relationships, drug developers typically use X-ray crystallography—a common experimental method that is tedious, slow, and expensive. In recent decades, scientists resorted to computational biology to overcome those obstacles, but none of the algorithms proved accurate enough.

According to our research, innovative neural-network-based algorithms can predict protein structures accurately in lab experiments and could turbocharge human therapies and agricultural breakthroughs. DeepMind’s AlphaFold2 has predictive accuracy that meets and sometimes exceeds high-fidelity experimental approaches[1] and could be applicable to all proteins and protein-to-protein interactions.

Neural Network Based Algorithms Could Lower Pre-Clinical Trial Costs and Invigorate Drug Candidate Pipelines
Knowing the shape of a protein structure at the start of research could reduce by 50% the cost and time from discovery to Investigational New Drug (IND) approval. An Alphafold-like algorithm that quickly determines protein shape could improve the economics more than our previous model suggested. For example, using past clinical trial throughput rates (“Status Quo” in the chart below), we estimated pre-clinical costs per commercialized drug at $243 million. If technologies such as NGS and AI were to improve throughput rates, however, pre-clinical costs per commercialized drug could be cut by more than half to $103 million (“NGS and AI” in the chart below), and new predictive neural-network-based algorithms like AlphaFold could halve those costs to $52 million. 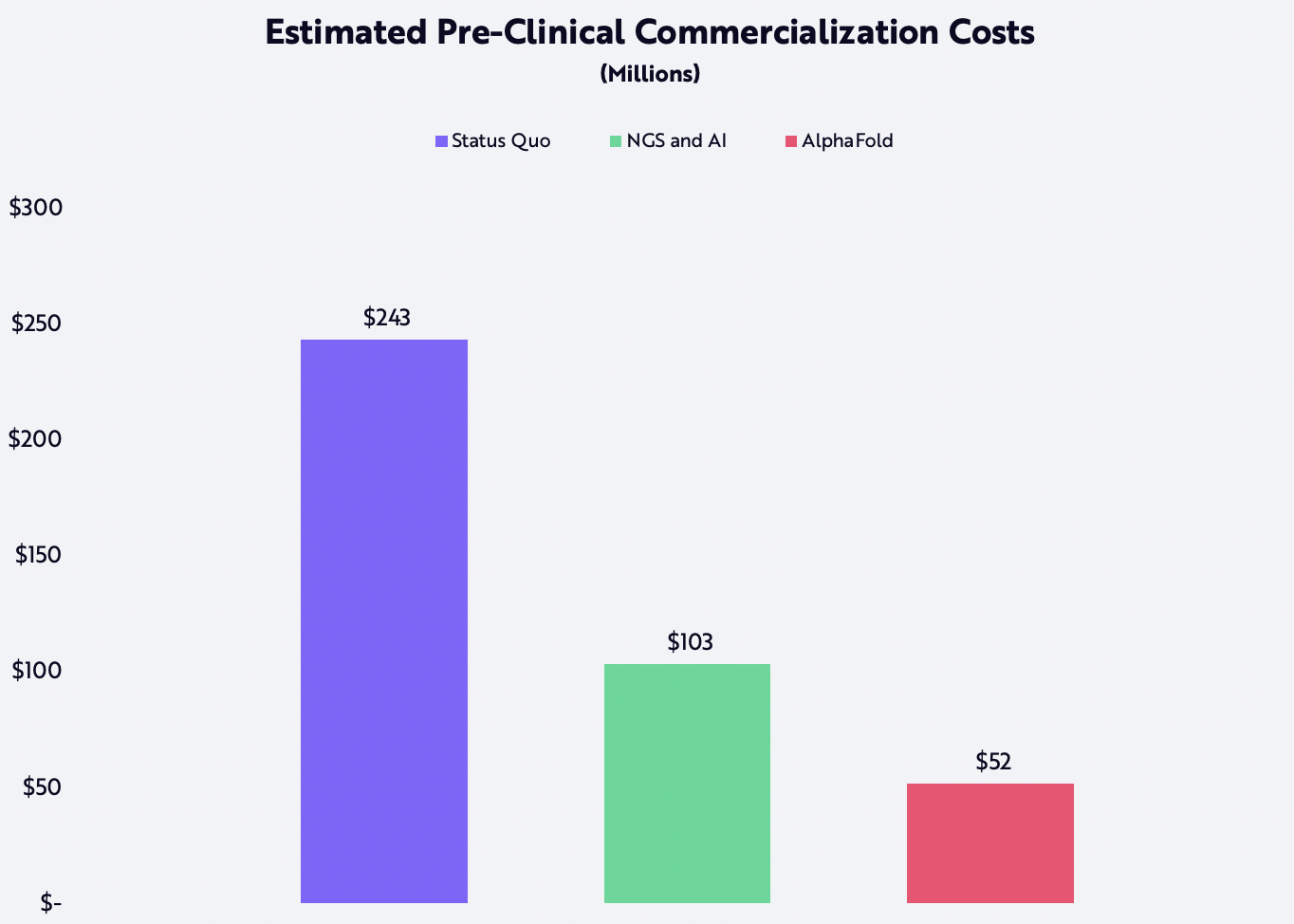 Assumptions: 15% discount rate at all phases except for registration, which has a 3% discount rate, $1B estimated peak sales for non-curative therapies, 70% net margin, 20% tax. Forecasts are inherently limited and cannot be relied upon.

Our research suggests that neural-network-based algorithms could reduce R&D costs, increase the value of clinical trial assets, and increase the probability of clinical trial phase transition. For example, enabling technologies could shorten the average time spent in pre-clinical experimentation. Historically, the duration of pre-clinical testing from discovery to phase 1 has averaged four years. Based on our model assumptions, that number drops to three years and, with neural-network-based algorithms, two years, as shown below. For the entire pipeline—from discovery to the registration of a therapeutic drug—technology could improve efficiency, reduce costs, and eliminate 3.5 years of research and development time. 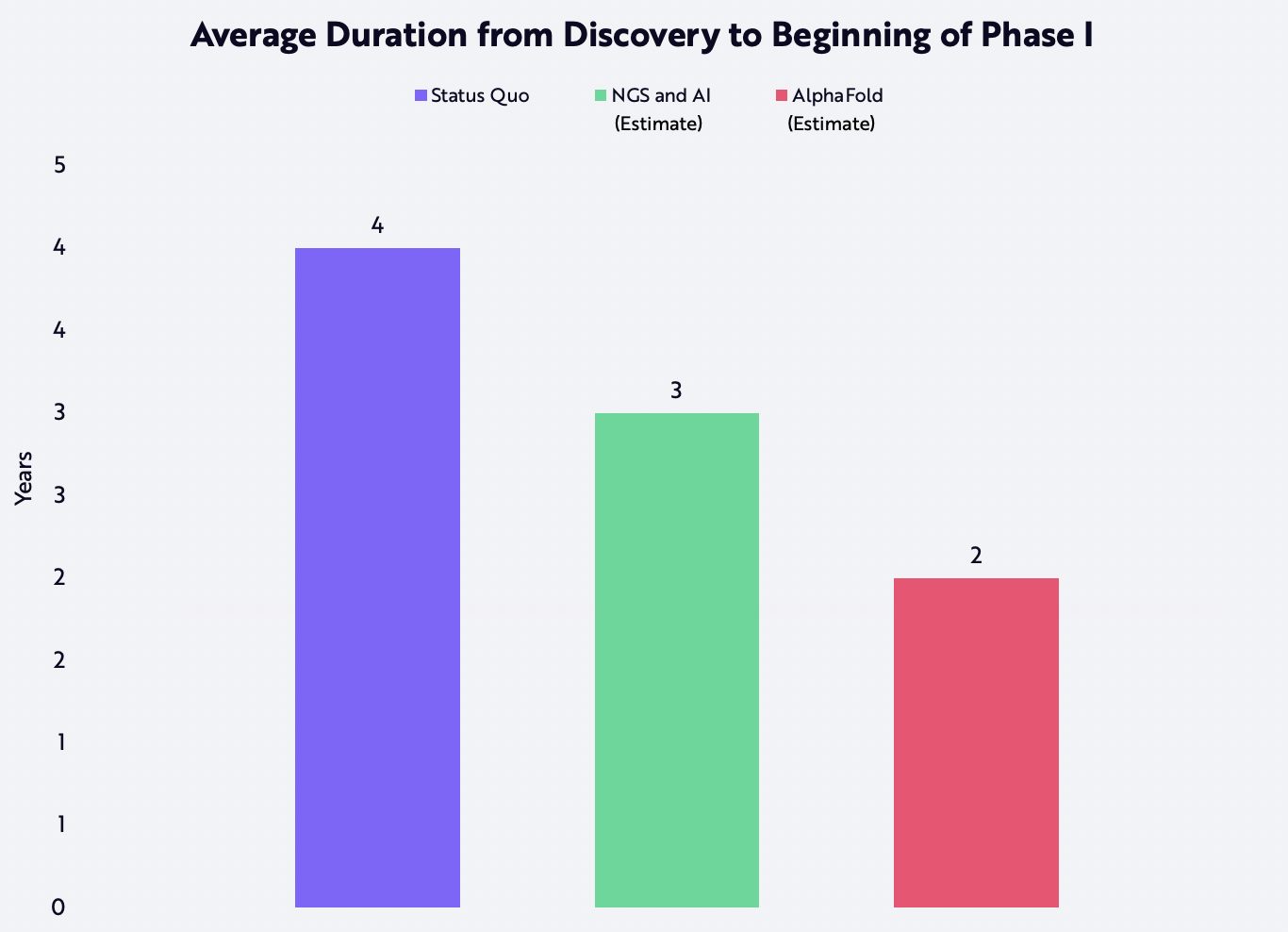 Assumptions: 15% discount rate at all phases except for registration, which has a 3% discount rate; $1B estimated peak sales for non-curative therapies; 70% net margin; 20% tax. Forecasts are inherently limited and cannot be relied upon.

In our view, AlphaFold or similar technologies could increase the net present value (NPV) of a discovery asset from $30 million to approximately $170 million, as shown below. Past drug developers might have spent $120,000 and a year of experimentation to determine a new protein structure. Today that information is accessible in databases, and broadly so, which should increase the pace and success rate of early-stage experimentation, implying both that the net present value of an early-stage asset should be higher and that more of those assets will enter the pipeline. Put differently, cost savings are unlikely to lower overall R&D spend on early-stage experimentation but should instead increase the number of drug candidates entering the pipeline.

Assumptions: 15% discount rate at all phases except for registration, which has a 3% discount rate; $1B estimated peak sales for non-curative therapies; 70% net margin, 20% tax. Forecasts are inherently limited and cannot be relied upon.

Mass adoption and scaling of NGS, AI, neural-network-based algorithms, and curative therapies could narrow the gap between the net present values of pre-clinical and clinical assets. In other words, we believe current early-stage pipelines, which growth equity investors often neglect, will be far more valuable than many realize.

Tags: Artificial Intelligence, Biotech, DNA Sequencing, Gene Editing, Genomics
See More
See all articles
You are leaving ark-invest.com
By clicking below you acknowledge that you are navigating away from ark-invest.com and will be connected to ark-funds.com ARK Investment Management LLC manages both web domains. Please take note of ARK’s privacy policy, terms of use, and disclosures that may vary between sites.
PROCEED