New Fund Commentary By Cathie Wood: Disruptive Innovation And Profitability Read Now
ARK Invest> Articles > Analyst Research > The Cable Box Is a Relic of the Past

Linear TV has offered viewers thousands of channels for a seemingly low price, but users today want more modern options and a better deal. While ~86 million households in the US still pay for linear TV, its days seem to be numbered.

Disruptive innovation typically follows a pattern: it evolves slowly at first and then all at once. Since peaking in 2011, the number of US linear TV households has declined 2.1% at an annual rate. That said, according to our research, by 2025, the number of US linear TV households will be cut nearly in half, from ~86 million at the start of 2020 to ~44 million, a level last seen more than 30 years ago, as shown below.

Despite eight consecutive years of declining viewership, advertising on linear TV has been remarkably stable, the calm before the storm in our view. We believe that as cord-cutting accelerates during the next five years, linear TV ad spend is likely to drop more than 50%, from $70 billion to roughly $34 billion, an abrupt shift analogous to print media’s demise during the Global Financial Crisis in 2008-2009. After levitating for years in the face of declines in readership, print advertising suffered years of double-digit declines.

As was the case with print media, we believe ad dollars are likely to shift from linear TV to more efficient platforms like streaming, a trend that traditional media companies have recognized. For example, during the past year alone, Comcast, Fox, and Viacom have acquired three players in the ad-supported streaming space: Xumo, Tubi, and Pluto TV, respectively.

That said, connected TV platforms are becoming a threat to traditional media companies. TV operating systems like Roku, Fire TV, and Android TV motivate many, if not most, television purchases. During the next five to 10 years, if the ad market for streaming soars, as we believe it will, TV operating systems like Roku will benefit from the share shift in revenues, taking 30% of the ad load on each of their channels.

While still well-positioned in one of the most profitable programming categories – live sports – linear TV seems to be on its last legs. Our analysis suggests that without live sports, cord-cutting rates would explode. According to The Trade Desk (TTD), 60% of households still subscribe to cable primarily for live sports, the reason that linear TV players are paying billions of dollars for the rights to broadcast them. Whether or not households watch sports, ~20% their monthly subscriptions – roughly $21 per month – in the case of cable pays for sports programming.

Making matters worse, three of the four major sports leagues will be renegotiating their contracts in the next two years. The NFL, MLB, and NHL all could cut their ties with major networks as early as this year, as shown below. 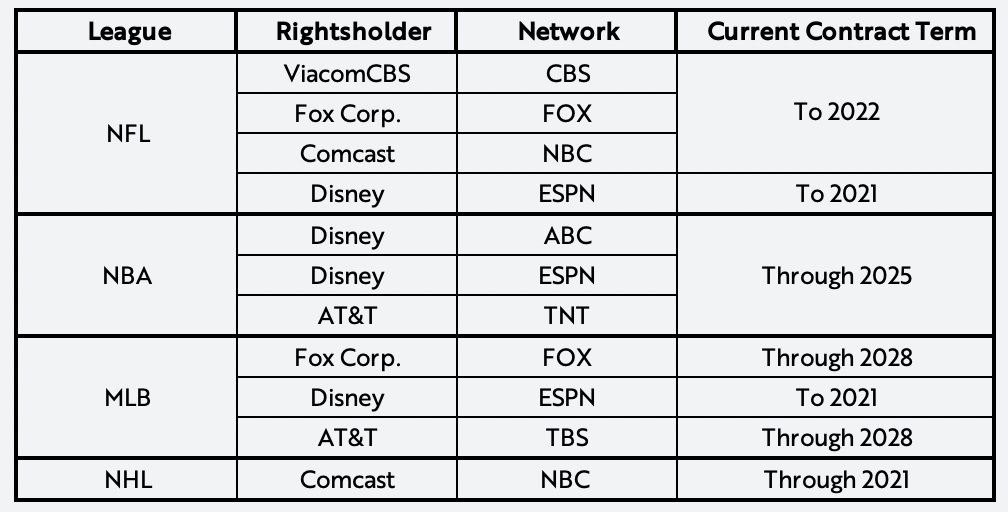 During the last few years, sports leagues have experimented with streaming, but none have struck a national streaming-first broadcasting deal. Consequently, linear players still have broader reach. That said, sports leagues have extracted more value in each round of negotiations, the latest worth $10.8 billion per year across the major four leagues, as shown below. 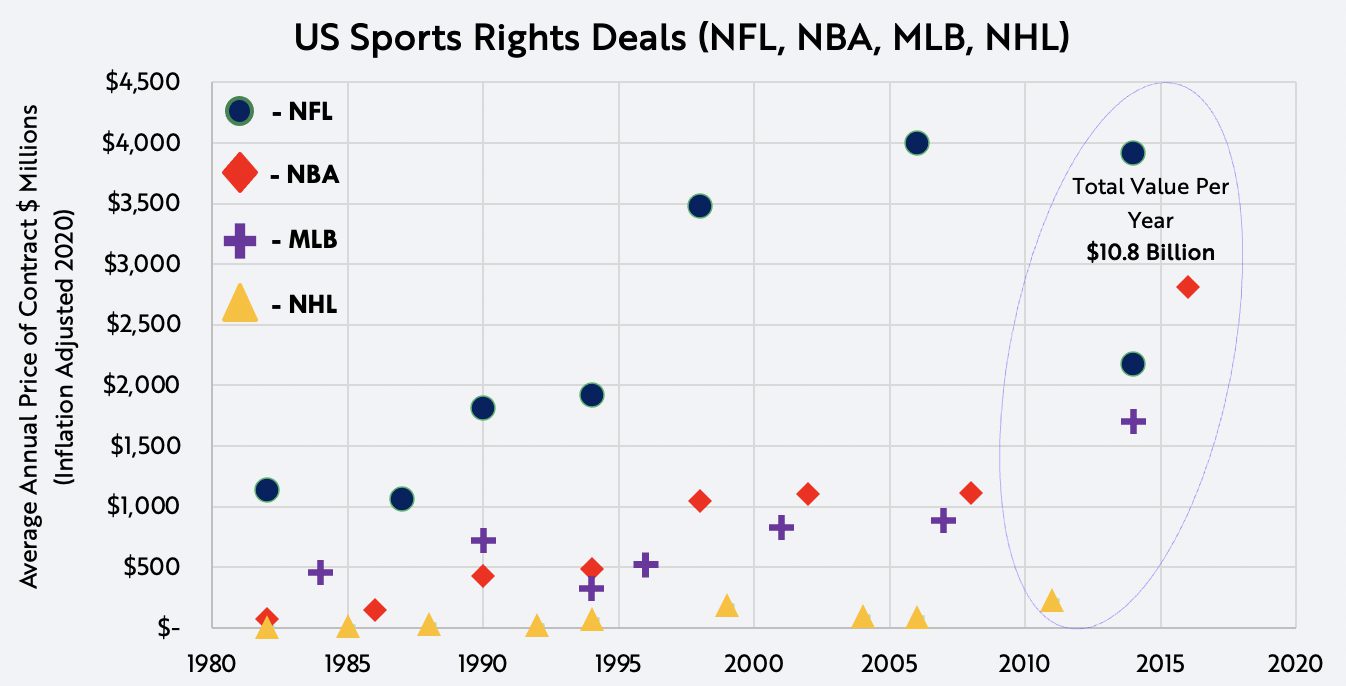 Now that players with more cash and reach – Amazon, Apple, and Google – are using streaming as customer acquisition channels for their core businesses, their digital bidding budgets seem likely to scale to heights that linear TV will find difficult to match. Recently, Amazon extended its streaming rights to Fox’s Thursday Night Football and got exclusive rights to one game a year, a potential sign that sports leagues could be open to more extensive streaming deals in the future. If so, we believe users will ask why they are paying sky-high prices for live sports that are available elsewhere for a fraction of the cost?

In our view, given the competition brewing for live sports broadcasting rights, the declining linear TV user base, and burgeoning new streaming options, the end of linear TV is not a question of “if” but “when”.